A typical Old World/New World tale. The Green New Deal was developed in Britain 10 years ago by renowned economists and experts. But much of Britain had fallen in love with austerity and Londoners with their new mayor Boris Johnson. It would take a young American to resurrect the topic. The benighted continent knows little of it, that little is due to the work of the ubiquitous Yanis Varoufakis, who has made the Green New Deal the centrepiece of his DiEM 25 movement.

Colin Hines has worked in the environmental movement for over 40 years on issues ranging from population, food, proliferation, and the adverse environmental and social effects of international trade. He is also the convener of the Green New Deal Group and blogs at Progressive Protectionism 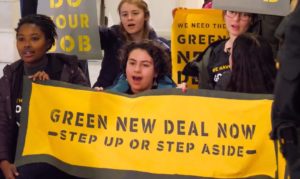 Shortly before the collapse of Lehman Brothers in 2008 a group of UK environmentalists and economists published the first ‘Green New Deal’ report https://www.greennewdealgroup.org/. This proposed a labour intensive green infrastructure programme which would tackle the crises of climate change and help mitigate the effects of the huge economic downturn which we correctly predicted. To help ensure that these adverse trends were reversed, it was felt crucial to return a sense of hope for the future, economic security for all, whilst fully protecting the environment.

The idea had its year in the Keynesian sun when the world concentrated on massive public spending to prevent the collapse of the economic system and to fund job programmes. Gordon Brown , Barack Obama, and the United Nation’s Environment Programme (UNEP) called for a Green New Deal, the Greens set up a European Green New Deal movement and green NGOs supported the idea.

However once the immediate threat of economic collapse receded then the centre right was able to replace short lived Keynesianism with talk of balancing the books and consequent need to introduce austerity. The ensuing public resentment against rising inequality and economic decline in many regions resulted in political unrest. In the UK this was used by EU-critical forces to help ensure the 2016 referendum result to leave. Throughout this period the Green New Deal group continued to publish reports and lobby for what we termed a ‘jobs in every constituency’ Green New Deal , but its traction was regrettably limited.

The Second Coming of the Green New Deal

In 2018 all this changed. In February two US researchers met the Green New Deal member and economist Ann Pettifor and as a result decided to take the Green New Deal name and concept back to the US. They were colleagues of a then unknown 29 year old New York woman working in a bar called Alexandria Ocasio-Cortez. In her successful campaign to become the youngest ever woman member of the House of Representative she and groupings of young activists put the Green New Deal idea, with an emphasis on social justice, on the political map. This has had a galvanising effect in the UK with young activists and those of us who have been working on the issue for a decade beginning to work together to demand a Green New Deal for the whole country.

Just as this was happening so worries about climate change were moving central stage. The UN’s top scientists warned we have just 11 years to halve global emissions and avoid climate catastrophe https://www.ipcc.ch/sr15/. This led 1.4 million young people to join the global school strikes movement to demand change https://www.theguardian.com/environment/2019/mar/19/school-climate-strikes-more-than-1-million-took-part-say-campaigners-greta-thunberg. A series of climate related events from massive fires in the US through to the recent devastating floods in Mozambique have fuelled a growing activists movement calling for transformational policies to tackle climate change, but in a way that benefits the majority. Finally in an echo of the 2008 crash there is now a growing conviction that another serious global downturn is imminent and debates have begun about how to stop it occurring.

Reactions to these three events have coalesced around increasing demands for a Green New Deal. This has a twin track approach of tackling rising inequality and social deprivation plus an emphasis on the need for a massive societal and economic shift to dramatically reduce carbon emissions. It also emphasises the generation and spread of economic activity with adequately paid, more secure jobs for every community.

Although support is growing, what hasn’t yet been adequately grasped in the UK is how a Green New Deal must be the crucial response to dealing with the aftermath of either a Brexit or no Brexit result. It will also help solve the other big problem that increasingly forces its way through the Brexit fog: the rising public preoccupation with inadequate funding for schools, the NHS, the police etc.

Campaigning for a Social and Green New Deal would mean rejecting austerity and instead massively increasing employment in face to face caring and a country wide green infrastructure programme. The latter would involve making the UK’s 30m buildings super-energy-efficient, accelerating the shift to renewable electricity supplies and storage, and tackling the housing crisis by building affordable, properly insulated new homes. A transport policy would need to rebuild local public transport links, properly maintain the UK’s road and rail system, and encourage a shift to electric vehicles. Also key will be prioritising more effective use of resources through a ‘circular economy’ and a more sustainable, localised food and agriculture system. This approach is labour-intensive, takes place in every locality and consists of work that is difficult to automate – and so could provide a secure career structure for decades. The resulting ‘jobs in every constituency’, from the left behind to the more comfortable regions  would also help address the conditions which were so crucial to the 2016 referendum result.

In terms of intergenerational solidarity, the school climate strikes have highlighted the political inability of these children’s elders to seriously tackle the most important threat of our time. However there is a way that politically active adults could answer the question ‘What did you do in the climate war Daddy?’. This will require putting the comprehensive carbon reduction solutions of the Green New Deal within the context of the more parochial and immediate domestic imperatives, such as dealing with a Brexit or a no Brexit future

The key question always asked about such a massive, transformative programme is where is the money coming from. The answer is that it can be funded from the usual sources such as increased Government expenditure, fairer taxes and encouraging savings into what might be termed ‘climate war bonds’. However the crucial centre piece in the event of a looming economic crisis must be a massive Green Quantitative Easing programme. After the previous crash $10trn of QE was injected into the global economy, but it wasn’t directed at job generating investments and mostly inflated the stock and property values of the already comfortably off.

Generating this enormous new source of money is as we know technically feasible and indeed the Bank of England’s Governor Mark Carney is on record as stating that if the government agreed then it could expand the range of assets it purchases . The Bank could then purchase new debt issued in the form of green bonds by a national investment bank to fund a massive green infrastructure programme. In that way it could either head off, or be the response to, an increasingly likely severe global economic slowdown .

With regard to the economic problems facing the Eurozone, even the Financial Times has called for a massive Green Quantitative Easing programme . This could provide a sense of economic security, and hence see off the threatened rise of the extreme right, by investing massively in job generating investments in social and green new deals.

The Green New Deal has received support from all the opposition parties in the UK . Recently the Labour Party has called for a Green Transition  involving a swift move to a decarbonised future and a promise to create hundreds of thousands of high-skilled, unionised green jobs. Last week, young Labour activists founded ‘Labour for a Green New Deal’ .

In Parliament, Labour’s Shadow Treasury Minister Clive Lewis and Green Party MP Caroline Lucas (a co-founder of the Green New Deal group) will table a Private Members’ Bill that (if passed) would force the government to enact a Green New Deal. The ‘Decarbonisation and Economic Strategy Bill’ would place duties on ministers to introduce a radical 10-year strategy for public investment designed to decarbonise the economy and eradicate inequality. It would legally require ministers to empower communities and workers to transition from high-carbon to low and zero-carbon industries, introduce stricter environmental regulations and protect and restore natural habitats. This is the first time a Bill designed to enact a Green New Deal has come before Parliament.

Caroline Lucas describes it as ‘an unprecedented mobilisation of resources invested to prevent climate breakdown, reverse inequality, and heal our communities. It demands major structural changes in our approach to the ecosystem, coupled with a radical transformation of the finance sector and the economy, to deliver both social justice and a livable planet’.

In Scotland there have been rousing calls to shift economic priorities to a Green New Deal that offers not only survival but ‘real, pure, distilled hope’ In Wales Plaid Cymru are also backing proposals for a ‘Rebalancing Green New Deal’. This demands that £1.5bn be annually invested in railway lines, clean energy plants and green infrastructure to ‘meaningfully rebalance the economy away from London’. Crucially it would allow ‘our young people to take up apprenticeship and university opportunities in Wales, without having to then move two hundred miles from home to find work’

Finally, not before time, it is being widely recognised that climate change is an urgent threat. But emphasising tackling it with a massive jobs programme is likely to be by far the best way to gain widespread voter support. This is would address the perceptive quote from one member of French yellow jackets that “Our elites are talking about the end of world when we are talking about the end of the month.” Doubtless many other struggling Europeans feel the same- a Green New Deal is a crucial approach to address such fears.

On Sunday there is a state election in the German state of Hessen. The Greens are expected to do well, as was the case over two weeks ago in Bavaria. They are being hailed as […]

War is never in the interest of working people, but it certainly is for the oligarchs in Russia, Ukraine, the USA, Britain, and the world over. John Rees is a writer, broadcaster and activist, and […]

João Paulo Batalha – The politics of justice: a watershed moment for Portugal and Angola

The justice systems in many European nations have little to do with justice, serving the interests of those in power. Portugal is no exception. João Paulo Batalha is a social activist and founding member of […]