As Big Tech’s market power grew, so did its political clout. Now, as the EU tries to rein in the most problematic aspects of Big Tech – from disinformation, targeted advertising to unfair competition practices – the digital giants are lobbying hard to shape new regulations. 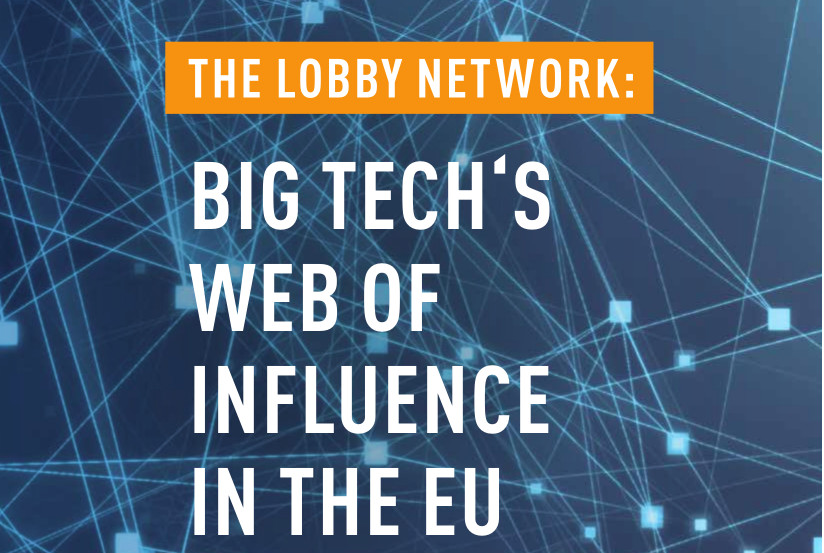 In ‘The Lobby Network’, Corporate Europe Observatory and Lobbycontrol offer an overview of the tech industry’s EU lobbying firepower. For the first time, we map the ‘universe’ of actors lobbying the EU’s digital economy, from Silicon Valley giants to Shenzhen’s contenders; from firms created online to those making the infrastructure that keeps the internet running; tech giants and newcomers.

We found a wide yet deeply imbalanced ‘universe’:

Big Tech’s huge lobbying budgets have a significant impact on EU policy-makers, who find digital lobbyists knocking on their door on a regular basis. The lobbying surrounding proposals for a Digital Services pack, the EU’s attempt at reining in Big Tech, provides the perfect example of how the firms’ immense budget provides them with privileged access: Commission high-level officials held 271 meetings, 75 percent of them with industry lobbyists. Google and Facebook led the pack.

In spite of publicly supporting these proposals, meeting minutes, leaked lobbying strategies and position papers show Big Tech are still lobbying against them, trying their best to water down any hard rules. This lobby battle has now moved to the European Parliament and Council and, in spite of the lack of transparency, we start seeing Big Tech’s lobbying footprint in the EU capitals like Tallinn, Estonia. 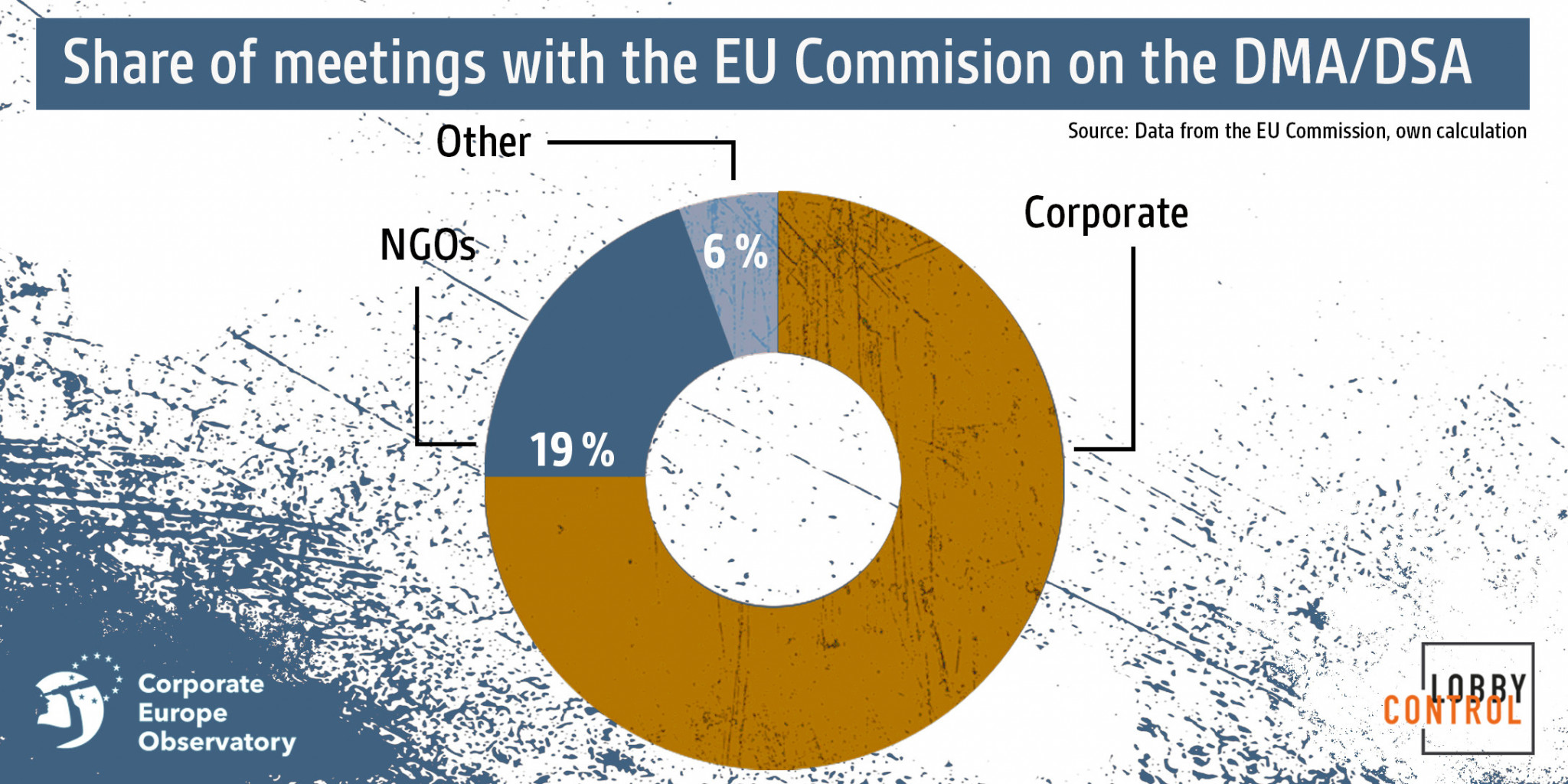 Tommaso Valletti, former Chief Economist of the Competition Directorate of the EU Commission and Professor of Economics at the Imperial College, added:

“The economic and political power of the digital giants is hefty, and they are not going to remain passive in the face of possible new rules that affect the way they conduct their business. That‘s why the EU Institutions urgently need to change the way they handle this lobbying and limit the power of big tech.“

Academic and Big Tech critic Shoshana Zuboff  Sidenote has argued that lobbying – alongside establishing relationships with elected politicians, a steady revolving door, and a campaign for cultural and academic influence – has acted as the fortification that allowed a business model, built on violating people’s privacy and unfairly dominating the market, to flourish without being challenged.

That seems to be the case in Europe too. Now, faced with increased criticism of these companies business practices and models, these firms are now trying to “reset the narrative”. The time of being proud of the motto “move fast, break things” is behind us as successive scandals showed that among the things Big Tech broke were people’s right to privacy, fair competition, and democratic processes.

Big Tech’s new narrative relies on publicly supporting new rules, but only soft rules, shaped by themselves. This is then combined with attempts to reframe regulation as a threat, not to their own profits but to SMEs and consumers. The final component is stoking up geopolitical fears by warning that regulation will cause Europe to fall behind the United States and, above all, China. Underlying this narrative is still the belief that regulation stifles innovation.

Big Tech’s lobbying also relies on its funding of a wide network of third parties, including think tanks, SME and startup associations and law and economic consultancies to push through its messages. These links are often not disclosed, obfuscating potential biases and conflicts of interest.

There are 14 think tanks and NGOs with close ties to Big Tech firms. The ethics and practice of these policy organisations varies but some seem to have played a particularly active role in discussions surrounding the Digital Services pack, hosting exclusive or skewed debates on behalf of their funders or publishing scaremongering reports. 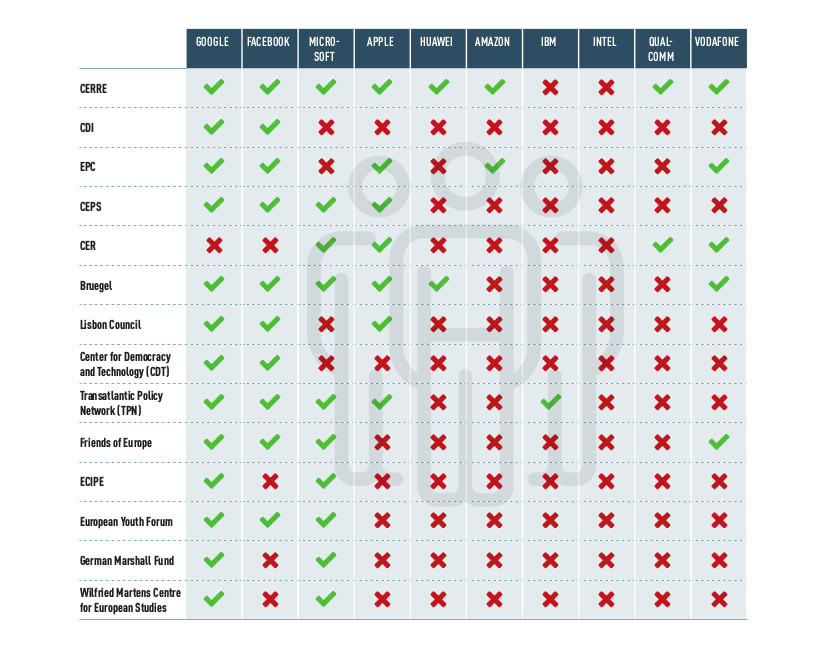 There’s an opacity problem here: Big Tech firms have fared poorly in declaring their funding of think tanks – mostly only disclosing these links after being pressured. And even still this disclosure is not complete. To this, Big Tech adds its funding of SME and startup associations; and the fact that law and economic experts hired by Big Tech also participate in policy discussions, often without disclosing their clients or corporate links.

Agustín Reyna, Director for Legal and Economic Affairs at the European Consumer Organisation (BEUC), replied to these findings saying:

“What is most striking is how Big Tech is trying to control the narrative around regulating digital markets and services, through its extensive use of think-tanks, industry groups, high-level names and consultancies and academic research. With big bucks and a towering presence, Big Tech is trying hard to prevent the emergence of EU rules that will force them to change the way they operate in Europe.”

Green MEP Alexandra Geese reacted saying that it “is unacceptable how tech companies dominate the public debate on digital legislation, especially DSA/DMA, through their direct access to the European Commission and legislators, as well as through think tanks and academic institutions funded by them. Seemingly ready to settle for legislation and to cooperate with the authorities, they steer the debate towards topics that don’t question their business model.”

The MEP, a shadow rapporteur on the DSA, added that we “need more independent experts in academia: even for lawmakers it is difficult to find expert advice by academic institutions that is not funded by tech. This is not in the best interest of our citizens.“

The immense lobbying resources of Big Tech reflects the sector’s increasing dominance in the economy and in society as a whole. Ten years ago, the picture of EU lobbying was different with sectors like finance or pharma dominating it. But this has changed over the last decade with Big Tech overtaking them in terms of spending, reach, and influence.

But it is not just Big Tech’s lobby firepower that is a problem: its business models threaten to undermine people’s rights, fair competition and democratic decision-making in our societies. The huge concentration of economic and lobby power is a direct threat to our democracy.

The alarming power of the digital sector should be a wake-up call to put in place stricter lobby regulation both at the EU and member state levels, and to make sure new instruments are created to limit the power of corporations that otherwise will use it to shape legislation according to their interests.

OUR PROGRAMME TO LIMIT THE POWER OF BIG TECH:

Efforts to regulate the digital economy have the potential to deliver a better internet, one that serves people, small businesses and communities. It is crucial that independent voices and citizens get involved with these policy discussions to ensure that lobbyists don’t get to shape the future of technology.

Heiner Flassbeck and Joachim Nanninga: TARGET 2 – or how to stir up the people

After the German TARGET 2 balance has almost reached a plus of a trillion euros there is a new wave of alarming articles in Germany, in which eternally scaremongering German economists try to make the […]

E-fuels are a prohibitively expensive and remarkably inefficient way to decarbonize the transportation sector. Stephanie Searle is Programme Lead at ICCT Cross-posted from the ICCT website Most claims about e-fuels are hard to swallow, including […]