…says the former diplomat Craig Murray. It always has been an option and will always be.

You are conditioned to believe that killing more people is a better solution than negotiating a compromise. This is despite the fact that it is self-evidently a psychopathic notion. Let me give you a homespun analogy.

I have this week been dealing with an incident where somebody feels their share of a limited income should be increased, due to the amount of work they have put in. Others felt the person was underestimating the amount of work they had also put in. It became quite a difficult discussion. Happily in the end a compromise has been reached that everyone can live with. At no stage did anybody turn to me and say “we should kill them, that will solve it”. (And to anticipate the trolls, no I do not get any income myself from it).

There may be differences of opinion within a village on whether a wind turbine should be built next to it. The matter will be resolved, one way or another. Nobody suggests the answer is to smash anybody into bloody pulp on the ground with bombs and automatic weapons fire.

Yet when the question is whether that village ought to be in Ukraine or in Russia, inflicting horrible, painful death on those who disagree is seen not only as legitimate, but as heroic and noble. Boasts are continually being made by both sides about how many of the “enemy” have been killed, as though they were orcs rather than human beings with their own hopes and dreams, no different to those they are fighting.

I do not wish to understimate the differences between being in Ukraine and being in Russia. But they pale compared to the difference between hundreds of thousands of people being alive, or hundreds of thousands of people being dead. The problem is much more comprehensible when you accept that there are a significant minority of people within Ukraine’s official borders who really do want their district to be in Russia, and in some limited number of eastern localities they are a majority. That is not a Russian invention.

Diplomatic solutions to territorial solutions always end with a certain amount of population movement to areas where people can be with “their” side in perceived greater safety and comfort. The second world war shifted territorial boundaries and moved populations to an incredible degree. Western Ukraine was historically Polish. Western and much of northern Poland was historically German.

The simplistic narrative that the Donbass is Russian is just untrue. Pre 2014 the urban populations in the Donbass were very largely Russian. Urban populations are more visible and easier mobilised. But a substantial minority were Ukrainian, almost all rural. While only a small percentaage of those Donbass Russians come from families settled there pre 1946.

The Crimea is even more difficult. The population was historically majority Tartar – Crimea was within living memory a Muslim land – and the Krim Tatars were deported brutally by Stalin. This is not ancient history. Much of the deportation did not happen until the 1950’s. I cannot understand those who join me in wanting the Chagos Islanders to get their country back, but do not take the same view of the rights of the Krim Tatars.

(The same people tend to dismiss the human rights abuses against the Uighurs. Muslim Central Asia is a serious blind spot for many on the left).

Thankfully, diplomatic channels to Russia through Turkey remain open in the Ukraine war, as witness the recent prisoner exchanges. I am happy to see the British mercenaries back home safe in the UK, not least because now we won’t need to hear any more lies about how they were not mercenaries but new Ukrainians who had permanently settled in Ukraine.

Western powers should have used the limited but real advances made by the Ukrainian military in the last fortnight to reach out to Putin at a point where he might have been persuaded to accept a deal based on the ceasefire lines as they existed in 2021. Instead, they have ramped up the Russophobia another notch and persuaded themselves that the total destruction of the Russian army can be achieved and Putin brought down by a colour revolution.

The grim response from Russia, with mass mobilisation, is all too predictable. I am afraid that the notion that opposition to the draft will see Putin ousted is totally unrealistic. It underestimates the power of nationalist propaganda within Russia, and misreads the national psychology.

It really doesn’t help when the Ukrainians paint swastikas on tanks. 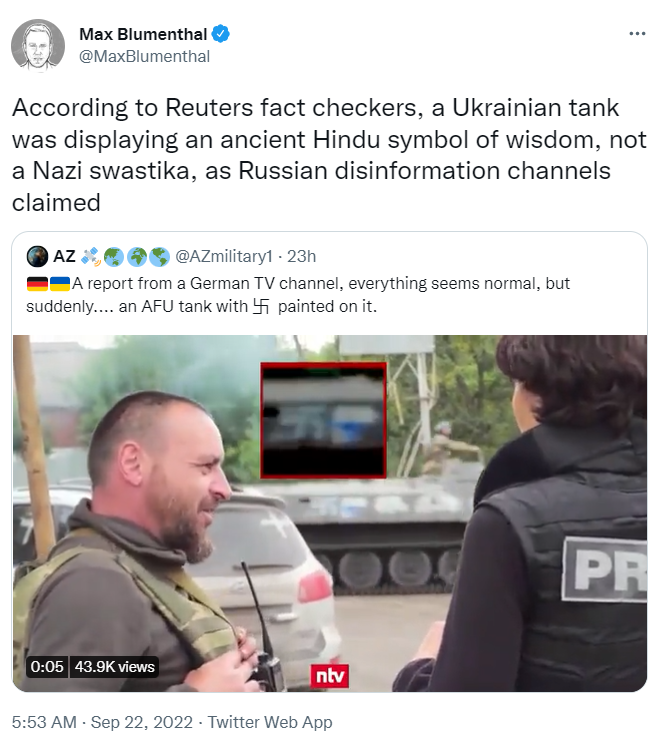 Do you believe that the Russians are propagandised into supporting this war but westerners are not? Here is an interesting experiment you can repeat. Go to google and do a google image search on “Swastikas on Ukrainian tanks”. I get this, and I suspect you will get something very similar: