If one feature of any truly revolutionary moment is the complete failure of conventional categories to describe what’s happening around us, then that’s a pretty good sign we’re living in revolutionary times.

David  Graeber is an American anthropologist and anarchist activist, currently professor of anthropology at the London School of Economics. 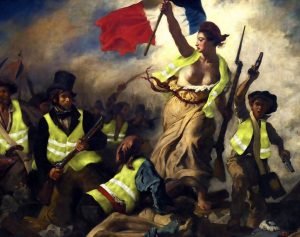 It strikes me that the profound confusion, even incredulity, displayed by the French commentariat—and even more, the world commentariat—in the face of each successive “Acte” of the Gilets Jaunes drama, now rapidly approaching its insurrectionary climax, is a result of a near total inability to take account of the ways that power, labour, and the movements ranged against power, have changed over the last 50 years, and particularly, since 2008. Intellectuals have for the most part done an extremely poor job understanding these changes.

Let me begin by offering two suggestions as to the source of some of the confusion:

1. in a financialised economy, only those closest to the means of money-creation (essentially, investors and the professional-managerial classes) are in a position to employ the language of universalism. As a result, any political claims as based in particular needs and interests, tended to be treated as manifestation of identity politics, and in the case of the social base of the GJ, therefore, cannot be imagined it as anything but proto-fascist.

2. since 2011, there has been a worldwide transformation of common sense assumptions about what participating in a mass democratic movement should mean—at least among those most likely to do so. Older “vertical” or vanguardist models of organization have rapidly given way to an ethos of horizontality one where (democratic, egalitarian) practice and ideology are ultimately two aspects of the same thing. Inability to understand this gives the false impression movements like GJ are anti-ideological, even nihilistic.

Let me provide some background for these assertions.

Since the US jettisoning of the gold standard in 1971, we have seen a profound shift in the nature of capitalism. Most corporate profits are now no longer derived from producing or even marketing anything, but in the manipulation of credit, debt, and “regulated rents.” As government and financial bureaucracies become so intimately intertwined it’s increasingly difficult to tell one from the other, wealth and power—particularly, the power to create money (that is, credit)—also become effectively the same thing. (This was what we were drawing attention to in Occupy Wall Street when we talked about the “1%’—those with the ability to turn their wealth into political influence, and political influence back into wealth.) Despite this, politicians and media commentators systematically refuse to recognize the new realities, for instance, in public discourse one must still speak of tax policy as if it is primarily a way of government raising revenue to fund its operations, whereas in fact it is increasingly simply a way of (1) ensuring the means of credit-creation can never be democratized (as only officially approved credit is acceptable in payment of taxes), and (2) redistributing economic power from one social sector to another.

Since 2008 governments have been pumping new money into the system, which, owing to the notorious Cantillon effect, has tended to accrue overwhelmingly to those who already hold financial assets, and their technocratic allies in the professional managerial classes. In France of course these are precisely the Macronists. Members of these classes feel that they are the embodiments of any possible universalism, their conceptions of the universal being firmly rooted in the market, or increasingly, that atrocious fusion of bureaucracy and market which is the reigning ideology of what’s called the “political center.” Working people in this new centrist reality are increasingly denied any possibility of universalism, since they literally cannot afford it. The ability to act out of concern for the planet, for instance, rather than the exigencies of sheer survival, is now a direct side-effect of forms of money creation and managerial distribution of rents; anyone who is forced to think only of their own or their family’s immediate material needs is seen as asserting a particular identity; and while certain identities might be (condescendingly) indulged, that of “the white working class” can only be a form of racism. One saw the same thing in the US, where liberal commentators managed to argue that if Appalachian coal miners voted for Bernie Sanders, a Jewish socialist, it must nonetheless somehow be an expression of racism, as with the strange insistence that the Giles Jaunes must be fascists, even if they haven’t realized it.

These are profoundly anti-democratic instincts.

To understand the appeal of the movement—that is, of the sudden emergence and wildfire spread of real democratic, even insurrectionary politics—I think there are two largely unnoticed factors to be taken into consideration.

The first is that financialized capitalism involves a new alignment of class forces, above all ranging the techno-managerials (more and more them employed in pure make-work “bullshit jobs,” as part of the neoliberal redistribution system) against a working class that is now better seen as the “caring classes”—as those who nurture, tend, maintain, sustain, more than old-fashioned “producers.” One paradoxical effect of digitization is that while it has made industrial production infinitely more efficient, it has rendered health, education, and other caring sector work less so, this combined with diversion of resources to the administrative classes under neoliberalism (and attendant cuts to the welfare state) has meant that, practically everywhere, it has been teachers, nurses, nursing-home workers, paramedics, and other members of the caring classes that have been at the forefront of labor militancy. Clashes between ambulance workers and police in Paris last week might be taken as a vivid symbol of the new array of forces. Again, public discourse has not caught up with the new realities, but over time, we will start having to ask ourselves entirely new questions: not what forms of work can be automated, for instance, but which we would actually want to be, and which we would not; how long we are willing to maintain a system where the more one’s work immediately helps or benefits other human beings, the less you are likely to be paid for it.

Second, the events of 2011, starting with the Arab Spring and passing through the Squares movements to Occupy, appear to have marked a fundamental break in political common sense. One way you know that a moment of global revolution has indeed taken place is that ideas considered madness a very short time before have suddenly become the ground assumptions of political life. The leaderless, horizontal, directly democratic structure of Occupy, for instance, was almost universally caricatured as idiotic, starry-eyed and impractical, and as soon as the movement was suppressed, pronounced the reason for its “failure.” Certainly it seemed exotic, drawing heavily not only on the anarchist tradition, but on radical feminism, and even, certain forms of indigenous spirituality. But it has now become clear that it has become the default mode for democratic organizing everywhere, from Bosnia to Chile to Hong Kong to Kurdistan. If a mass democratic movement does emerge, this is the form it can now be expected to take. In France, Nuit Debout might have been the first to embrace such horizontalist politics on a mass scale, but the fact that a movement originally of rural and small-town workers and the self-employed has spontaneously adopted a variation on this model shows just how much we are dealing with a new common sense about the very nature of democracy.

About the only class of people who seem unable to grasp this new reality are intellectuals. Just as during Nuit Debout, many of the movement’s self-appointed “leadership” seemed unable or unwilling to accept the idea that horizontal forms of organization were in fact a form of organization (they simply couldn’t comprehend the difference between a rejection of top-down structures and total chaos), so now intellectuals of left and right insist that the Gilets Jaunes are “anti-ideological”, unable to understand that for horizontal social movements, the unity of theory and practice (which for past radical social movements tended to exist much more in theory than in practice) actually does exist in practice. These new movements do not need an intellectual vanguard to provide them with an ideology because they already have one: the rejection of intellectual vanguards and embrace of multiplicity and horizontal democracy itself.

There is a role for intellectuals in these new movements, certainly, but it will have to involve a little less talking and a lot more listening.

None of these new realities, whether of the relations of money and power, or the new understandings of democracy, likely to go away anytime soon, whatever happens in the next Act of the drama. The ground has shifted under our feet, and we might do well to think about where our allegiances actually lie: with the pallid universalism of financial power, or those whose daily acts of care make society possible.

The problem with understanding the effects of globalisation on inequality is the information being used and how it is interperted. Branko Milanović gives some insight into trends and how they are and can be explained. […]

Yanis Varoufakis wrote: “Being able to speak authoritatively about economics is a prerequisite for democracy”. This is a challenge facing any progressive movements in mobilisiing support. The indefatigableRichard Murphy has started to look at this […]

Italian elections are rapidly nearing. Although this article left out Liberi e Pari (Free and Equal) it ohterwiseprovides a good overview. The conclusion seems realistic enough: after the elections there will be no change, just […]