An interesting insight into the question of why the Bank of England trashed its planned Quantitative Tightening and went back to Quantitative Easing. Who was it saving? 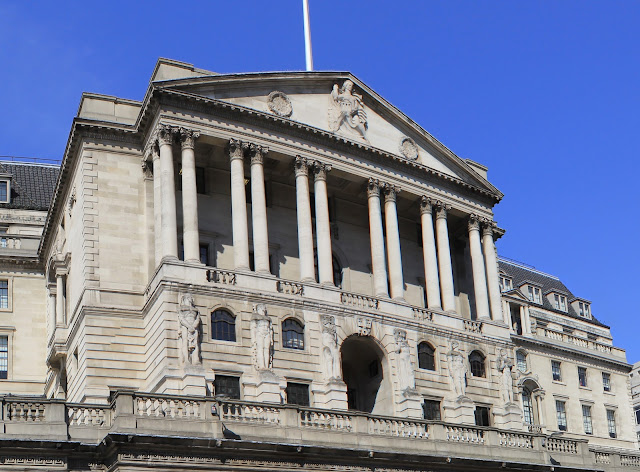 Why did the Bank of England intervene in the gilt market this week? The answer that has been doing the rounds is that it was protecting the solvency of pension funds. But this doesn’t make sense to me. The Bank doesn’t have any mandate to prevent pension funds going bust. And anyway, the type of pension fund that got into trouble isn’t at meaningful risk of insolvency. There was never any risk to people’s pensions.

I don’t think the Bank was concerned about pension funds at all. I think it had a totally different type of financial institution in its sights.

Let’s recap the sequence of events from a market perspective. This was, on the face of it, a classic market freeze. Pension funds sold assets, mainly long-dated gilts, to raise cash to meet margin calls on interest rate swaps (of which more shortly). The sudden influx of long gilts on to a market already spooked by an extremely foolish government policy announcement caused their price to crash. I am told that at one point, long gilts couldn’t be priced – which means there were literally no buyers.

The crashing price of long gilts severely damaged the asset side of defined-benefit (DB) pension fund balance sheets, leaving them with gaping deficits. If these were normal companies, this would be balance sheet insolvency. But DB pension funds aren’t normal companies. They are really the asset management arms of their sponsoring employers. As long as the employer is solvent, a DB pension fund can run with a substantial deficit – and some do, especially in the public sector, though this imposes an obligation on the employer to ensure the pension fund can meet its obligations over the longer term.

So scary stories about pension fund “insolvency” entirely missed the point. DB pension funds were never at risk of insolvency. They were merely extremely illiquid. If you aren’t clear on the difference between illiquidity and insolvency, read this.

Nonetheless, DB pension funds do try to minimise deficits, because as Toby explains, employers really don’t like having to report wild swings in their DB pension obligations in their financial accounts:

“So if you, a board member of a company with loads of pension obligations, want to avoid reporting wild swings in your pensions funding status to both markets (in your reports and accounts) or the Pensions Regulator (and maybe have to submit a recovery plan, as well as pay a higher risk-based PPF levy), you want a pension scheme that aligns its assets with the way your liabilities are measured…”

Pension funds therefore aim to match the duration of their liabilities and assets as far as possible. And they use interest rate swaps to smooth out cashflows and perhaps make a bit of money from leverage. This is what “liability driven investment” (LDI) is all about. (I am oversimplifying quite a bit as this isn’t a post about the workings of LDI, on which I don’t pretend to be an expert.)

The way interest rate swaps work is key to this post. Pension funds that use derivatives have to post liquid assets (cash or cash equivalents) as collateral. The collateral must be sufficient to cover daily changes in the market price of the swaps (variation margin). Collateral insufficiency triggers a margin call, in response to which the fund must post more liquid collateral.

Pension funds that are trying to match assets with long-dated liabilities obviously won’t hold much in the way of cash and cash equivalents. So when they receive margin calls they have to sell or pledge the most liquid of their assets to obtain cash. For sterling DB pension funds, that means long gilts. As Toby says, they hold lots and lots of them.

So when the long gilt market froze, DB pension funds couldn’t raise enough cash to meet their margin calls. There was a real risk that they would default on them. This could trigger immediate liquidation of the collateral and unwinding of the swaps.

When swaps unwind because of missed margin calls, losses due to collateral insufficiency rebound to the counterparties – and the losses can be substantial. Who were these counterparties?

Well, they weren’t LDI managers such as Blackrock. Those are just intermediaries. Some of them might have failed – or shut their doors, as Blackrock did – but that wouldn’t have bothered the Bank of England. And nor would DB pension funds going into deficit because of mark-to-market losses on long gilts. That’s a problem for the pensions regulator, not the Bank of England.

Yet the Bank of England was clearly worried enough to intervene directly in the long gilt market. It acted as buyer of last resort for long gilts, signalling that it would buy $65bn worth of the things over the next couple of weeks. This injected liquidity into the market, enabling pension funds to raise the cash they needed. It also incidentally set a floor under the long gilt price, limiting the damage to pension fund balance sheets.

But the Bank’s action wasn’t fundamentallly about ensuring the solvency of pension funds. It was intended to head off the threat of a systemic meltdown.

As mentioned before, pension funds hedge the difference between assets and liabilities with interest rate swaps. They have fixed liabilities and variable assets, so they want to swap fixed for floating rate (again I am simplifying – Toby has a more detailed explanation, op. cit.). So counterparties to these swaps must be institutions that want to swap floating rate for fixed. What type of institutions have floating-rate short-term liabilities but longer-term fixed-rate assets? Why, banks, of course.

So this is not a story about pension funds, it’s about banks. The gilt market freeze was creating a cash collateral shortfall for pension funds, and as a result banks were at risk of serious losses on derivatives. We’ve seen this movie before and we know it ends with large quantities of blood on the floor. That’s what the Bank of England feared. It intervened to stop the bleeding before it became a haemorrhage.

When you dig deeply enough into a financial crisis, you almost always find it’s really about banks.

Juan Laborda – Spain: Every Credible Recovery Plan begins with ‘G’ as in Green

Wolfgang Knorr: Trickery in Climate Neutrality – How Net Zero is Secretly Being Redefined

The crux is that corporations and governments will leave out no tricks and lies to give the impression that we are well on our way to halting climate change, while doing too little or nothing. […]