Julian Assange is a truth-teller who has committed no crime but revealed government crimes and lies on a vast scale and so performed one of the great public services of my lifetime.

John Pilger is an Australian journalist, writer, scholar, and documentary filmmaker living in the UK 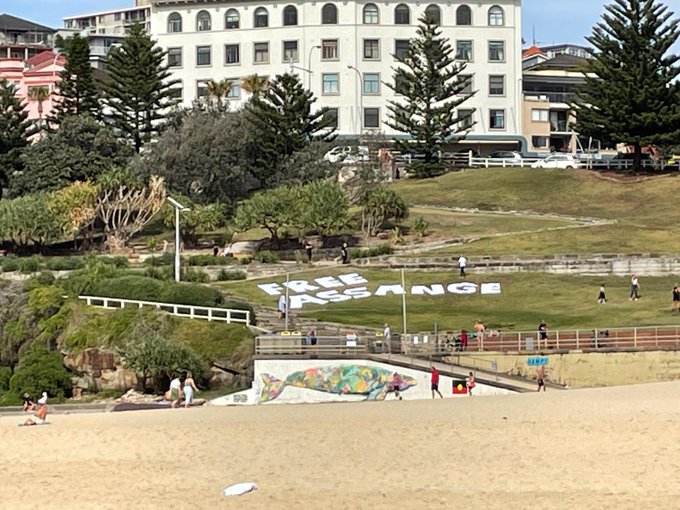 When I first saw Julian Assange in Belmarsh prison, in 2019, shortly after he had been dragged from his refuge in the Ecuadorean embassy, he said, “I think I am losing my mind.”

He was gaunt and emaciated, his eyes hollow and the thinness of his arms was emphasized by a yellow identifying cloth tied around his left arm, an evocative symbol of institutional control.

For all but the two hours of my visit, he was confined to a solitary cell in a wing known as “health care,” an Orwellian name. In the cell next to him a deeply disturbed man screamed through the night. Another occupant suffered from terminal cancer. Another was seriously disabled.

“One day we were allowed to play Monopoly,” he said, “as therapy. That was our health care!”

“This is One Flew Over the Cuckoo’s Nest,” I said.

Julian’s black sense of humour has often rescued him, but no more. The insidious torture he has suffered in Belmarsh has had devastating effects. Read the reports of Nils Melzer, the UN Special Rapporteur on Torture, and the clinical opinions of Michael Kopelman, emeritus professor of neuropsychiatry at King’s College London and Dr. Quinton Deeley, and reserve a contempt for America’s hired gun in court, James Lewis QC, who dismissed this as “malingering.”

I was especially moved by the expert words of Dr. Kate Humphrey, a clinical neuropsychologist at Imperial College, London. She told the Old Bailey last year that Julian’s intellect had gone from “in the superior, or more likely very superior, range” to “significantly below” this optimal level, to the point where he was struggling to absorb information and “perform in the low to average range.”

At yet another court hearing in this shameful Kafkaesque drama, I watched him struggle to remember his name when asked by the judge to state it.

For most of his first year in Belmarsh, he was locked up. Denied proper exercise, he strode the length of his small cell, back and forth, back and forth, for “my own half-marathon,” he told me. This reeked of despair. A razor blade was found in his cell. He wrote “farewell letters.” He phoned the Samaritans repeatedly.

At first he was denied his reading glasses, left behind in the brutality of his kidnapping from the embassy. When the glasses finally arrived at the prison, they were not delivered to him for days. His solicitor, Gareth Peirce, wrote letter after letter to the prison governor protesting the withholding of legal documents, access to the prison library, the use of a basic laptop with which to prepare his case. The prison would take weeks, even months, to answer. (The governor, Rob Davis, has been awarded an Order of the British Empire.)

Books sent to him by a friend, the journalist Charles Glass, himself a survivor of hostage-taking in Beirut, were returned. Julian could not call his American lawyers. From the start, he has been constantly medicated. Once, when I asked him what they were giving him, he couldn’t say.

At the late October High Court hearing to decide finally whether or not Julian would be extradited to America, he appeared only briefly by video link on the first day. He looked unwell and unsettled. The court was told he had been “excused” because of his “medication.” But Julian had asked to attend the hearing and was refused, said his partner Stella Moris. Attendance in a court sitting in judgment on you is surely a right.

This intensely proud man also demands the right to appear strong and coherent in public, as he did at the Old Bailey last year. Then, he consulted constantly with his lawyers through the slit in his glass cage. He took copious notes. He stood and protested with eloquent anger at lies and abuses of process.

The damage done to him in his decade of incarceration and uncertainty, including more than two years in Belmarsh (whose brutal regime is celebrated in the latest Bond film) is beyond doubt.

But so, too, is his courage beyond doubt, and a quality of resistance and resilience that is heroism. It is this that may see him through the present Kafkaesque nightmare—if he is spared an American hellhole.

I have known Julian since he first came to Britain in 2009. In our first interview, he described the moral imperative behind WikiLeaks: that our right to the transparency of governments and the powerful was a basic democratic right. I have watched him cling to this principle when at times it has made his life even more precarious.

Almost none of this remarkable side to the man’s character has been reported in the so-called “free press” whose own future, it is said, is in jeopardy if Julian is extradited.

Of course, but there has never been a “free press.” There have been extraordinary journalists who have occupied positions in the “mainstream”—spaces that have now closed, forcing independent journalism on to the internet.

There, it has become a “fifth estate,” a samizdat of dedicated, often unpaid work by those who were honorable exceptions in a media now reduced to an assembly line of platitudes. Words like “democracy,” “reform,” “human rights” are stripped of their dictionary meaning and censorship is by omission or exclusion.

The recent fateful hearing at the High Court was “disappeared” in the “free press.” Most people would not know that a court in the heart of London had sat in judgment on their right to know: their right to question and dissent.

Many Americans, if they know anything about the Assange case, believe a fantasy that Julian is a Russian agent who caused Hillary Clinton to lose the presidential election in 2016 to Donald Trump. This is strikingly similar to the lie that Saddam Hussein had weapons of mass destruction, which justified the invasion of Iraq and the deaths of a million or more people.

They are unlikely to know that the main prosecution witness underpinning one of the concocted charges against Julian has recently admitted he lied and fabricated his “evidence.”

Neither will they have heard or read about the revelation that the CIA, under its former director, the Hermann Goering lookalike Mike Pompeo, had planned to assassinate Julian. And that was hardly new. Since I have known Julian, he has been under threat of harm and worse.

On his first night in the Ecuadorean embassy in 2012, dark figures swarmed over the front of the embassy and banged on the windows, trying to get in. In the U.S., public figures—including Hillary Clinton, fresh from her destruction of Libya—have long called for Julian’s assassination. The current President Biden damned him as a “hi-tech terrorist.”

The former prime minister of Australia, Julia Gillard, was so eager to please what she called “our best mates” in Washington that she demanded Julian’s passport be taken from him—until it was pointed out to her that this would be against the law. The current prime minister, Scott Morrison, a PR man, when asked about Assange, said, “He should face the music.”

It has been open season on the WikiLeaks founder for more than a decade. In 2011, the Guardian exploited Julian’s work as if it was its own, collected journalism prizes and Hollywood deals, then turned on its source.

Years of vituperative assaults on the man who refused to join their club followed. He was accused of failing to redact documents of the names of those considered at risk. In a Guardian book by David Leigh and Luke Harding, Assange is quoted as saying during a dinner in a London restaurant that he didn’t care if informants named in the leaks were harmed.

In 2013, I asked the filmmaker Mark Davis about this. A respected broadcaster for SBS Australia, Davis was an eyewitness, accompanying Assange during the preparation of the leaked files for publication in the Guardian and the New York Times. He told me, “Assange was the only one who worked day and night extracting 10,000 names of people who could be targeted by the revelations in the logs.”

Lecturing a group of City University students, David Leigh mocked the very idea that “Julian Assange will end up in an orange jumpsuit.” His fears were an exaggeration, he sneered. Edward Snowden later revealed that Assange was on a “manhunt timeline.”

Luke Harding, who co-authored with Leigh the Guardian book that disclosed the password to a trove of diplomatic cables that Julian had entrusted to the paper, was outside the Ecuadorean embassy on the evening Julian sought asylum. Standing with a line of police, he gloated on his blog, “Scotland Yard may well have the last laugh.”

The campaign was relentless. Guardian columnists scraped the depths. “He really is the most massive turd,” wrote Suzanne Moore of a man she had never met.

The editor who presided over this, Alan Rusbridger, has lately joined the chorus that “defending Assange protects the free press.” Having published the initial WikiLeaks revelations, Rusbridger must wonder if the Guardian’s subsequent excommunication of Assange will be enough to protect his own skin from the wrath of Washington.

The High Court judges are likely to announce their decision on the U.S. appeal in the new year. What they decide will determine whether or not the British judiciary has trashed the last vestiges of its vaunted reputation; in the land of Magna Carta this disgraceful case ought to have been hurled out of court long ago.

The missing imperative is not the impact on a collusive “free press.” It is justice for a man persecuted and willfully denied it.

Julian Assange is a truth-teller who has committed no crime but revealed government crimes and lies on a vast scale and so performed one of the great public services of my lifetime. Do we need to be reminded that justice for one is justice for all?

Like the UK, European governments have been protecting the profits of fossil fuel companies instead of investing in renewables. Now the chickens are coming home to roost and we shall have to bail them out […]