A thoughtful piece concerning economics and its relation to society. Well worth reading. 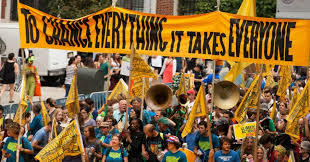 In the United Kingdom we face the imminent likelihood of an election in which the political choices before voters will be in clear focus, remaining within the European Union or leaving (perhaps under disastrous conditions); social democracy or deregulated capitalism; saving the environment or further destruction of it; parliamentary democracy or authoritarianism. In the context of these momentous decisions, and with Parliament prorogued again, we should reflect on a still famous statement by a past prime minister.

In the course of an interview in Woman’s Own, then prime minister Margaret Thatcher famously stated “There is no such thing as society”, elaborating,

There is living tapestry of men and women and people and the beauty of that tapestry and the quality of our lives will depend upon how much each of us is prepared to take responsibility for ourselves and each of us prepared to turn round and help by our own efforts those who are unfortunate.

Many if not most people seized upon the initial, declarative sentence and expressed shock at its ideological dogmatism.  It is worth pursuing the underlying meaning of the statement by going to first principles. Consider the following restatement of the Thatcher assertion:

Many if not most people would accept or not strongly object to the foregoing 100 word paragraph.  However, it is no more than a restatement of “there is no such thing as society” that uses the term Thatcher rejected.  Far from the blueprint of democracy and freedom, it lays the basis for the rise of authoritarianism.  It is the essence of neo-liberal ideology as found in the work of one of Thatcher’s favourite ideologues, F. A. Hayek,

WE CALL A MULTITUDE of men [sic! people or individuals] a society when their activities are mutually adjusted to one another. Men in society can successfully pursue their ends because they know what to expect from their fellows. Their relations, in other words, show a certain order. How such an order of the multifarious activities of millions of men is produced or can be achieved is the central problem of social theory and social policy. [Kinds of Order in Society]

Like Hayek’s statement, my 100 word rewrite of Thatcher’s infamous one-liner is pure neo-liberal ideology.  From a progressive perspective every sentence is false.  Humanity (“multitude of men”) appears to consist of individuals, but this is correct only in the trivial quantitative sense that its members can be counted.  Thatcher’s one-liner, my 100 words and Hayek’s “multitude of men” represent ideological inversion of reality.

Society may appear as the sum of individuals’ activities “mutually adjusted to one another”.  In reality individual behaviour is the manifestation of the operation of society as a whole.  Reality is the reverse of Thatcher’s one-liner: “There is no such thing as individuals”, rather there is the “living tapestry” of society that facilitates and constrains the behaviour of people.

Another female politician, United States Senator Elizabeth Warren, succinctly captured the reality of the “multifarious activities of millions” in a speech in 2011 in Andover, Massachusetts (see my forthcoming book, The Debt Delusion, Chapter 5),

On one level this message comes across as disarmingly simple, what each person achieves requires the contribution of others.  The simple message contains a far more profound one.  Each person is born, lives and dies within a set of social relations and social responsibilities from which we cannot be extracted.  Society creates and defines the families that Thatcher viewed as the basis of human organization.  The fundamental fallacy of the deregulation agenda lies in treating people as what they are not, individuals extracted out the society that created and maintains them.

Societies consist of citizens, who acting through democratic institutions seek to solve collective problems such as Brexit, the environment and inequality.  Central to the functioning of those institutions is the nature of the economy – it is not the sum of bold and meek individual actions.  Quite to the contrary, people’s actions in pursuit of their livelihoods occur within the constraints set by social values and the state of the economy as a whole.

“There is no such thing as society” finds its economics counterpart in neoclassical economics, especially neoclassical microeconomics, which “deals with what choices people make, what factors influence their choices and how their decisions affect the goods markets by affecting the price, the supply and demand”.  By implication it follows that macroeconomics is the sum of individual actions by households and firms.  Lionel Robbins formalized the idea that the economy as a whole was the sum of its parts in his Essay on the Nature and Significance of Economic Science (1932).

In that work, Lionel Robbins famously defined economics (no prefix) as “the science which studies human behaviour as a relationship between ends and scarce means which have alternative uses”.  That definition would subsequently enshrine itself in mainstream textbooks.  The disarmingly simple sentence carries a major ideological message.  For resources to be “scarce” they must be fully utilized. In a society with idle labour resources are not scarce.  In a neoclassical world, idle labour implies that production of more of every good and service is possible.

Therefore, Robbins defined economics as the study of the economy at full employment.  Keynes called this the “special case” and thus titled his critique of it the “general theory”:

I have called this book the General Theory of Employment, Interest and Money, placing the emphasis on the prefix general. The object of such a title is to contrast the character of my arguments and conclusions with those of the classical [neoclassical in my terminology] theory of the subject, upon which I was brought up and which dominates the economic thought, both practical and theoretical, of the governing and academic classes of this generation.

In Chapter 2, section IV, he wrote, referring to the high unemployment of the mid-1930s,

…[I]f the classical theory is only applicable to the case of full employment, it is fallacious to apply it to the problems of involuntary unemployment…. The classical theorists resemble Euclidean geometers in a non-Euclidean world who, discovering that in experience straight lines apparently parallel often meet, rebuke the lines for not keeping straight as the only remedy for the unfortunate collisions which are occurring.

Economics is not the study of allocating scarce resources, nor is macroeconomics the sum of individual actions and outcomes except in the definitional sense that social behaviour manifests itself through people.  A definition of economics that abandons the analytically unsound focus on individuals might be the following: the study of the mobilization of resources for the ongoing reproduction of society.

By using “mobilization” rather than “allocation” the definition explicitly makes under-utilization of resources, especially labour, the general case.  “Reproduction of society” explicitly specifies the analytical priority of the whole over the parts.  The aggregate economy is not the sum of individual actions.  Individual actions are the manifestation of collective reproduction.

Finally, I should be clear that accepting under-utilization as the general case implies that almost all the generalizations of neoclassical economics collapse.  Most important,  the neoclassical theory of price (value) derives from scarcity, full employment.  The price of every good and service is its opportunity cost, what had been foregone to produce it.  In the absence of scarcity more of every good or service could be produced, opportunity cost is zero, and all neoclassical prices would be zero.

Keynes did not explicitly conclude that under-utilization means the collapse of “classical theory”, but implicitly recognized and accepted it.  In his writings after the publication of The General Theory we find no scarcity arguments, though as I discuss elsewhere there are treatments of aggregate economic behaviour close to full utilization in the context of inflationary pressures.

Appropriately defining society and economics has implications for the issues listed in the first paragraph.  Whether the UK government remains in the European Union is not primarily an issue of export opportunities for firms or cross-border employment opportunities of individuals.  Rather, it is a question of the type of society we seek.  Saving our environment does not involve reforming individual behaviour nor is it a conflict of generations.  Environmental sustainability requires reform of the reproduction of society.

Most obviously, the economy does not regulate itself, but functions within the constraints set by society.  Social democracy constrains its operation to be in the interest of the many not the few.  Democratic institutions provide the potential vehicle to achieve the interest of many.

The end of coal in Britain. The UK government plans to ban coal to produce energy in 2025. What happens when the Hinkley Point nuclear reactor C is not finished by the middle of 2025 […]

Capitalism is celebrated by the liberals as a success story. But, since the liberals came to power, capitalism has lost an enormous amount of its allure. There is no right policy when the thinking behind […]