The increase in workplace militancy around the world is a window of opportunity that has created advances. The state and employers, however, also have strategies to curtail the fightback. 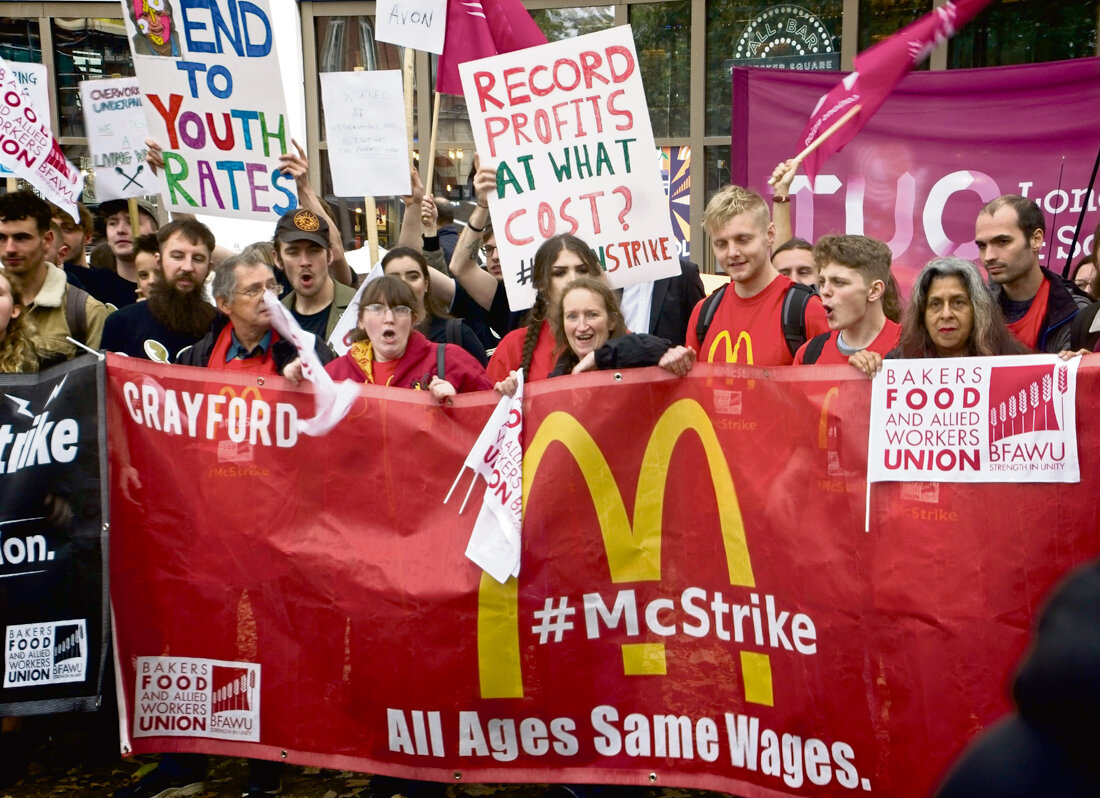 After touching down from his first space adventure, billionaire Jeff Bezos drew substantial backlash when he said the following at the post-flight press conference: “I also want to thank every Amazon employee and every Amazon customer because you guys paid for this.” Little wonder. Amazon is known for its union busting, low wages, inhumane conditions and exploitative practices. That Bezos rides his rocket into space on the back of an army of low paid workers seems to capture the essence of capitalism. Despite the rhetoric of “building back better” the likes of Bezos have seen their wealth grow throughout the pandemic. American billionaires saw their net worth increase by more than a trillion dollars. Meanwhile, the experience of working-class Americans has been of rising poverty and instability.

As of May of this year, trade union membership in the UK had risen by around 120,000. Between 2015 and today, trade unions have grown at their most sustained rate since the 1970s. New unions and workplace campaigns are appearing too. Deliveroo drivers are organising. Fast food workers in the US are rebelling. Fed Ex workers in France have taken strike action after a derisory pay offer. Spanish steel workers have taken strike action after losing substantial sums of money and cuts to hours during the pandemic while company profits soared. Refuse workers in the UK are fighting – and winning – strike campaigns for better wages. And lorry drivers are planning action too. It would be mistaken to exaggerate. But something is beginning to stir.

It is not just that there has been an up-tick in strikes and union membership. For many, the pandemic has led to a broader re-evaluation of the meaning of work in their lives and about what they expect in return for their labour. Given the high levels of unemployment, you might expect an acquiescence to low pay and conditions. But in lots of ways – and this is a developing process – we are seeing some disruption to this logic.

Rather than a clamour for jobs companies are reporting labour shortages. As the Financial Times reports on the situation in the US: “…companies are desperate to hire staff as continuing fears about the pandemic, a lack of childcare, and a temporary expansion of unemployment benefits have kept many workers on the side-lines. That means people looking for work hold more bargaining power with prospective employers than they have in decades.”

They continue: “Workers are using their newfound leverage to demand higher salaries and to prod employers into hiring and training them for jobs even when they lack experience.”

KFC – an American institution – has been unable to keep up with consumer demand in the country, because they are having to pay higher prices for chicken as suppliers struggle to attract workers. Supply lines are being affected by the pandemic. There are lots of factors involved. In the case of the UK the impact of Covid coincides with a reduction in workers from Brexit. But the overall outcome seems to reinforce the idea that workers have a chance to seize the initiative. As one lorry driver planning on taking action in the UK makes clear: “For far too many years we have been ignored, exploited and taken for granted. Now our time has come, now we have a window of opportunity to be listened to.”

It is a growing sentiment. Unite Hospitality in Scotland has a charter of demands including: a real living wage, an end to zero hours contracts, a proactive sexual harassment policy, 100% tips and notice of rota changes. All of these would help address the often dire experiences of hospitality workers, and their demands are being made at a time when the industry is desperate for staff. Once more, this enhances the power of workers as opposed to the employers.

Meanwhile, nurses in England are resisting the paltry and frankly offensive 3% pay rise announced by the Tories. They enjoy huge public support given their role during the pandemic and are seeking a 15% pay rise. They are starting the process of organising lunchtime protests and a serious fight over pay. Again, there are 100,000 vacancies in NHS England. The question will be posed: how seriously is the government taking this disastrous situation when it can’t commit to paying NHS workers properly?

To what extent, we don’t yet know, but the working-class are re-emerging as a force. The opponents of organised labour are also all too aware of this. They will contend that cuts to social security, a sharp retreat of the state-led pandemic support structures, and a slashing of public health measures will be required to get people back into the system and to ensure that workers don’t get ideas beyond their station.

Economist Larry Elliot rightly contextualises rising trade union membership by saying: “Unions are far less powerful than they were four decades ago; the balance of power in the workplace has shifted in favour of employers through a combination of mass unemployment, curbs on trade unions and welfare reforms designed to ensure that people take low paid jobs.” Yet green shoots are in evidence and – for the time being – structural pressures appear to be to the advantage of workers especially if more militant and sustained forms of action can emerge. A movement of hospitality workers, nurses, lorry drivers, refuse cleaners, unemployed youth and so on could create a powerful front – and not just for better pay. They could provide leadership and vision for society as a whole in the aftermath of the pandemic. It is not coming from anywhere else, least of all the billionaire “astronauts”.

Positive Money – ECB reshuffle: The EU can do better than gentlemen’s agreements behind closed doors

Appointments to the European Central Bank’s Executive Board are no less than a strategic and political decision over the future of the Eurozone. But experience has shown this process is not transparent, open, and democratic […]

The result of Germany’s general election was not what pundits had expected (and hoped for). While the hubris of Europe’s poltical establishment continues unabated, reality ruins the Chancellor Merkel celebation. Mathew D. Rose is an […]

Jason Hickel examines the arguments of green growth and finds them lacking. Green growth is simply not capable of reversing ecological breakdown and keep global warming under 1.5 degrees. Jason Hickel is an anthropologist who […]