What we have in the media and political establishment is, for the most part, a one-sided, even nonexistent, public discussion and debate

Katrina vanden Heuvel is the editorial director and publisher of the Nation and is president of the American Committee for U.S.-Russia Accord (ACURA). She writes a weekly column at the Washington Post and is a frequent commentator on U.S. and international politics for Democracy Now, PBS, ABC, MSNBC and CNN 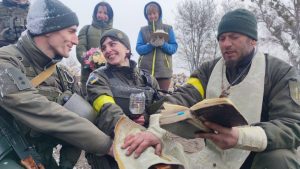 It’s time to challenge the orthodox view on the war in Ukraine.

As Russia’s illegal and brutal assault enters its fourth month, the impact on Europe, the Global South and the world is already profound. We are witnessing the emergence of a new political/military world order. Climate action is being sidelined as reliance on fossil fuels increases; food scarcity and other resource demands are pushing prices upward and causing widespread global hunger; and the worldwide refugee crisis — with more international refugees and internally displaced people than at any time since the end of World War II — poses a massive challenge.

Furthermore, the more protracted the war in Ukraine, the greater the risk of a nuclear accident or incident. And with the Biden administration’s strategy to “weaken” Russia with the scale of weapons shipments, including anti-ship missiles, and revelations of U.S. intelligence assistance to Ukraine, it is clear that the United States and NATO are in a proxy war with Russia.

Shouldn’t the ramifications, perils and multifaceted costs of this proxy war be a central topic of media coverage — as well as informed analysis, discussion and debate? Yet what we have in the media and political establishment is, for the most part, a one-sided, even nonexistent, public discussion and debate. It’s as if we live with what journalist Matt Taibbi has dubbed an “intellectual no-fly zone.”

Those who have departed from the orthodox line on Ukraine are regularly excluded from or marginalized — certainly rarely seen — on big corporate media. The result is that alternative and countervailing views and voices seem nonexistent. Wouldn’t it be healthy to have more diversity of views, history and context rather than “confirmation bias”?

Those who speak of history and offer context about the West’s precipitating role in the Ukraine tragedy are not excusing Russia’s criminal attack. It is a measure of such thinking, and the rhetorical or intellectual no-fly zone, that prominent figures such as Noam Chomsky, University of Chicago professor John Mearsheimer and former U.S. ambassador Chas Freeman, among others, have been demonized or slurred for raising cogent arguments and providing much-needed context and history to explain the background of this war.

In our fragile democracy, the cost of dissent is comparatively low. Why, then, aren’t more individuals at think tanks or in academia, media or politics challenging the orthodox U.S. political-media narrative? Is it not worth asking whether sending ever-more weapons to the Ukrainians is the wisest course? Is it too much to ask for more questioning and discussion about how best to diminish the danger of nuclear conflict? Why are nonconformists smeared for noting, even bolstered with reputable facts and history, the role of nationalist, far-right and, yes, neo-Nazi forces in Ukraine? Fascist or neo-Nazi revivalism is a toxic factor in many countries today, from European nations to the United States. Why is Ukraine’s history too often ignored, even denied?

Meanwhile, as a former Marine Corps general noted, “War is a racket.” U.S. weapons conglomerates are lining up to feed at the trough. Before the war ends, many Ukrainians and Russians will die while Raytheon, Lockheed Martin and Northrop Grumman make fortunes. At the same time, network and cable news is replete with pundits and “experts” — or more accurately, military officials turned consultants — whose current jobs and clients are not disclosed to viewers.

What is barely reflected on our TVs or Internet screens, or in Congress, are alternate views — voices of restraint, who disagree with the tendency to see compromise in negotiations as appeasement, who seek persistent and tough diplomacy to attain an effective cease-fire and a negotiated resolution, one designed to ensure that Ukraine emerges as a sovereign, independent, reconstructed and prosperous country.

“Tell me how this ends,” Gen. David Petraeus asked Post writer Rick Atkinson a few months into the nearly decade-long Iraq War. Bringing this current war to an end will demand new thinking and challenges to the orthodoxies of this time. As the venerable American journalist Walter Lippmann once observed, “When all think alike, no one thinks very much.”

In September, the European Commission published a new ‘Pact on Migration and Asylum’ aimed at addressing the issue of irregular migration in the EU. Nadia Petroni argues the proposed measures will not help alleviate migration […]

Daniele Albertazzi and Mattia Zulianello – The Italian Right Sweeps to Victory in Umbria: What Now for the Second Conte Government?

Regional elections in Umbria on 27 October produced a clear victory for Matteo Salvini and the Italian right. Daniele Albertazzi and Mattia Zulianello write that with the Five Star Movement and Democratic Party failing to […]

Branko Milanović looks back at Ian Kershaw’s definitive work “Hitler – Nemesis” Branko Milanović is an economist specialised in development and inequality. His newest  book is “Capitalism, Alone: The Future of the System That Rules […]