Excellent facts and numbers: Residence by investment programmes are available in several EU countries. These programmes grant visas in return for investments in specified areas. Drawing on a new study, Kristin Surak examines the uptake of these programmes across the EU, the characteristics of applicants, and the nature of their investments. 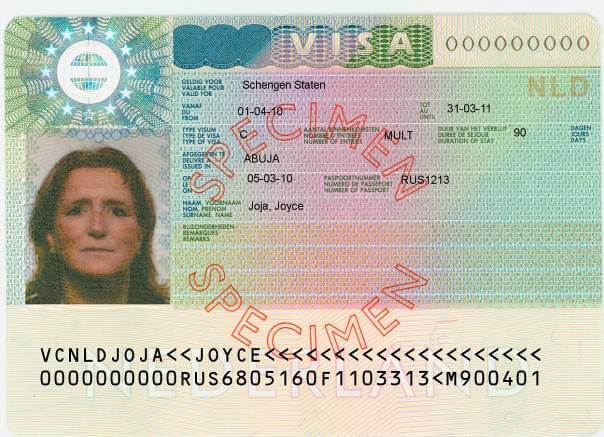 Who wants to buy a visa? The spread of so-called golden visa programmes over the past decade has raised many questions about these opportunities to gain a residence permit – for those who can afford it. All one needs to do is park around €250,000 or so in a specified investment area – usually real estate, bank deposits, or government bonds – and go through a standard application process, which can take just a few weeks. Spouses, children, and sometimes even parents can be included on the application, securing residence benefits for the whole family. Such programmes can be found around the world and are quite common in Europe, where half of all EU member states host them.

These options are attractive for several reasons: they secure the right to reside in the issuing country, they may bring a return on the investment, and they bring travel benefits within the wider Union. Since the Covid-19 pandemic, too, a new bonus has been noted as well: the opportunity to enter Europe even when borders are raised. The work-around has not been lost on wealthy Americans who saw their mobility options plummet during the height of travel restrictions. For much of 2020, an eagle-embossed blue passport was simply not enough to get into many countries. But because most EU member states allowed both their citizens and their residents to return, a golden visa could have done the trick in many places.

But who participates in these programmes? A lot of questions have been asked about benefits, risks, and even security issues around golden visa schemes, but without systematic quantitative research on programme uptake, such assessments remain speculative. In a recent study, I use new data to look into who and how many go for these options, which have been available in fourteen EU member states, including the UK before Brexit. 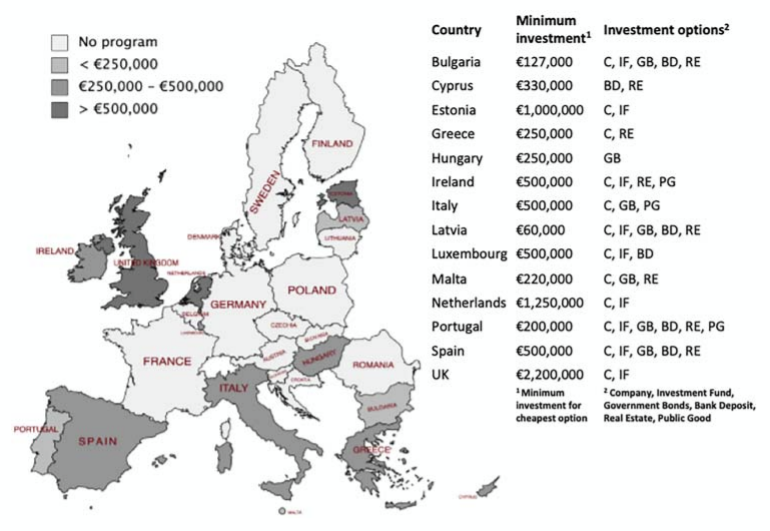 Across time, EU countries have approved around 40,000 applications for golden visas. However, the actual number of people gaining residence permits is much greater since each application includes an average 1.6 family members in addition to the investor. As such, over 100,000 people have gained EU residence through them. Yet within the Union as a whole, this represents a tiny proportion – about 1 percent or less – of longer-stay residence permits issued. As such, they’re not a very prominent way of gaining access to Europe. Nonetheless, smaller countries with popular schemes, like Greece and Portugal, can find that their golden visa programme accounts for more than 10 percent of resident permits issued in recent years. 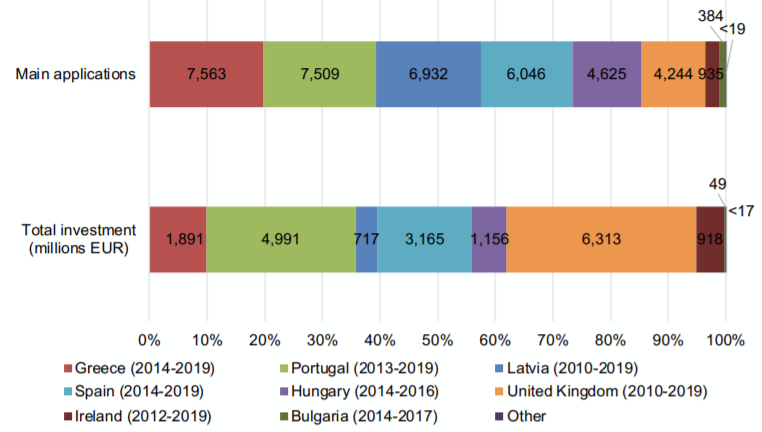 Note: Exact investment figures are available only for Portugal and Latvia. In all other cases, total investment is estimated by multiplying the number of applicants by the minimum investment amount. The ‘other’ category includes Estonia, Luxembourg, and the Netherlands, which have fewer than 20 applicants among them. Sources: Bulgaria: Investment Bulgaria; Estonia: Police and Border Guard Board; Greece: Enterprise Greece; Hungary: Immigration and Asylum Office; Ireland: Department of Justice and Equality; Latvia: Office of Citizenship and Migration Affairs; Luxembourg: Ministry of Foreign and European Affairs; Netherlands: Immigration and Naturalization Service; Portugal: Immigration and Borders Service; Spain: Ministry of Labor and Migration; UK: Home Office.

If fourteen EU member states have – or have had – programmes, not all have seen similar uptake. Some places, like Estonia, Luxembourg, and the Netherlands, have welcomed fewer than a dozen people in total through these measures, and most countries with programmes approve fewer than 500 applications annually. Instead, interest is concentrated on just a handful of options: in particular, Portugal, Spain, Latvia, and Greece. These four countries have accounted for 70 percent of all approved applications and almost 60 percent of all revenue generated.

Where do the investors come from? Almost 50 percent are Chinese, followed by Russians who constitute around one-quarter of the participants. Both countries saw the growth of substantial private wealth during the transition from communist to capitalist systems under continuing autocratic rule – a combination that stokes interest in investment migration options. Outside these two behemoths, the most popular countries of origin read as a list of political hotspots: Brazil, Turkey, Ukraine, South Africa, Iran, Egypt, Lebanon, Iraq. This finding aligns with research on demand for citizenship by investment programmes that shows that many investors see their new documents as an insurance policy or a way to hedge risks. Furthermore, demand is patterned by colonial connections: Portugal sees a disproportionate number of Brazilians, as does Greece with Turks and Latvia with Russians.

Figure 3: Proportion of applications approved by region of origin 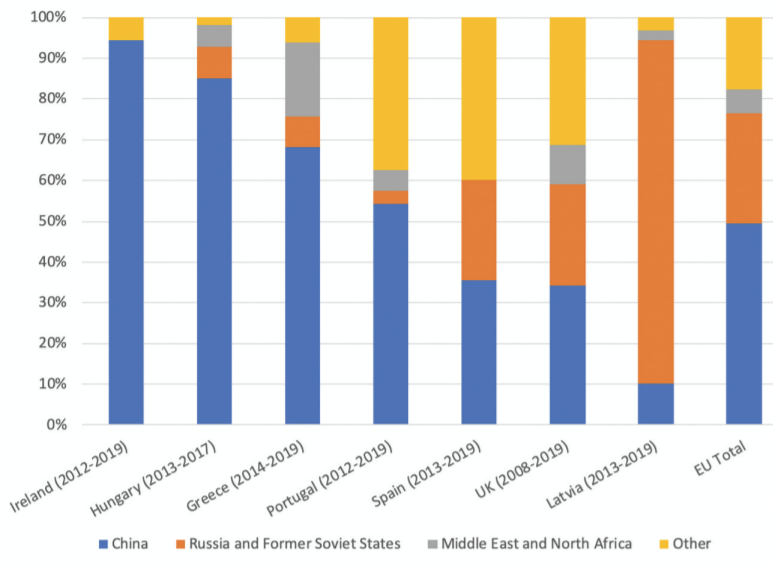 Migration is often a family decision, and the mobility opportunities offered by golden visa programmes are no different, with an average of 1.6 family members added to each application – a number that is growing. Indeed, some countries have expanded their family reunion provisions to draw in more investors. The result is that significantly more people gain residence than investment monies brought in. Yet these are still noteworthy, with the programmes now attracting over €3 billion annually to the EU. The most popular places, like Portugal, Spain, and Greece, attract around €750 million each year through the options.

Finally, some evidence suggests that that a few individuals are “serial investor migrants.” That is, they acquire citizenship through investment in a place like Saint Kitts or Dominica and then use their new nationality when applying for residence by investment. The end result is to multiply the options in their “mobility portfolio.” Though complete numbers are not available, there are at least 100 serial investor migrants, with most gaining residence in the UK, though some have acquired visas for Hungary, Ireland, Latvia, and Portugal. Indeed, the island federation of Saint Kitts and Nevis – whose entire population of 55,000 would fit into Arsenal Stadium – had the highest per capita uptake of the UK’s Tier 1 (Investor) visa.

The impact of Covid-19 on the programmes remains to be seen, and it will take some time for its impact to appear. Many government ministries slowed or stopped application processing during the pandemic, and travel to submit biometric information for the applications has yet to resume completely. The result is long backlogs in many countries. However, it is likely that the pandemic, as well as Brexit, will bring a change in the demographics of demand.

Principally, it is likely to increase. The pandemic has meant that even more wealthy people have felt hemmed in by borders and are likely to hedge the risk in the future by ensuring they can move smoothly across them and spend time in desirable locales. But the composition may change as well as more wealthy people from western countries, suddenly facing limited mobility, search for solutions. As a result, Americans and Brits may fuel a boom in demand for golden visas.

For more information, see the author’s accompanying paper in the Journal of Contemporary European Studies

Heiner Flassbeck – Italy: A Choice in Emilia Romagna – or How the EU is Constantly Dismantling Itself

Salvini will carry on, enormously strengthened, and sooner or later he will reach his goal. Heiner Flassbeck is an economist, as well as publisher and editor of  “flassbeck economics international” Originally posted in German at […]

Sergio Cesaratto and Stavros Mavroudeas – Revelli, SYRIZA and Render unto Caesar the things that are Caesar’s…

While the EU, the IMF, and Syriza are trying to sale the tale of a Greek recovery, the facts reveal another story. Sergio Cesaratto is Professor of Growth and Development Economics and of Monetary and […]

Danny Dorling – You may say “jam tomorrow”. But we say, “share today”

Rather than promising growth tomorrow, policy-makers should give more to younger generations today Danny Dorling is Halford Mackinder Professor of Geography, University of Oxford Cross-posted from Danny Dorling´s blog Slowing GDP growth We tend to […]