It seems that four decades after the conclusion of the Cold War people have forgotten that the world still faces a nuclear threat. 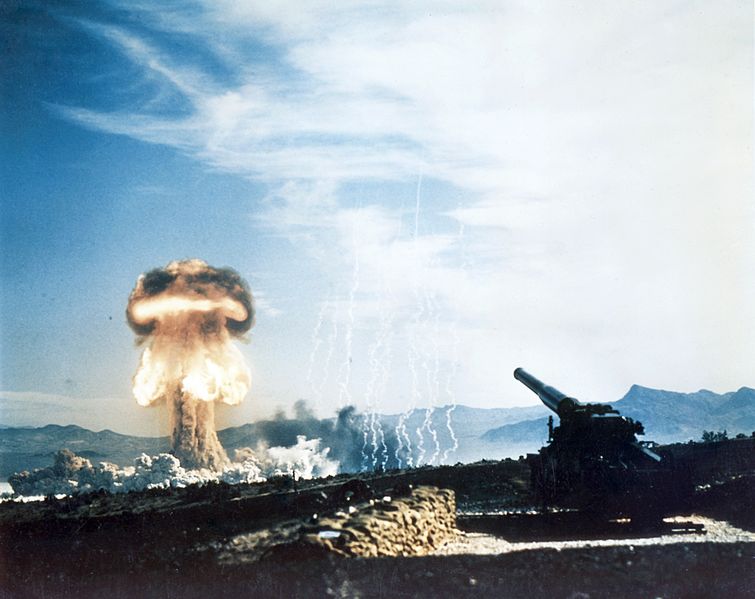 The risk of a nuclear war is becoming greater than it was in the first Cold War because Russia under President Vladimir Putin is much weaker – and therefore more likely to use nuclear weapons – than the Soviet Union at the height of its power under Nikita Khrushchev and Leonid Brezhnev. It is only as a nuclear superpower that Moscow retains parity with the US in their capacity for mass destruction.

Putin carried out some nuclear sabre-rattling at the start of his war in Ukraine byputting his nuclear forces on a higher level of alert, saying that he was determined to deter foreign interference in his military campaign. Many dismissed his threat as rhetorical at the time, but since then his ill-planned invasion has continued to falter, showing up Moscow’s conventional military forces as weaker than anybody had supposed.

Political leaders in the West now talk blithely of supporting regime change in Russia or imposing a no-fly zone on Ukraine, which would involve shooting down Russian planes and attacking anti-aircraft missile batteries inside Russia. These threats may not always be serious, but they are likely to be taken seriously in a paranoid Kremlin. With much of the Russian army tied down in Ukraine for the foreseeable future, Putin will increasingly look to his 1,000 to 2,000 tactical nuclear weapons to even up the balance against Nato in Eastern Europe.

Strangely, there was probably more concern in the West over Saddam Hussein using his non-existent WMD (weapons of mass destruction) in 2003 than there is about Putin using his vast and all-too-real nuclear arsenal today. The risk is not only real but it is growing as Putin’s military adventure in Ukraine looks like one of the greatest misjudgements of the last hundred years. It is becoming clear that Russia simply does not have the strength to conquer and pacify a nation of 44 million supported by most of the rest of the world.

But what makes the crisis doubly dangerous is that the Russian disaster in Ukraine was wholly predictable, even inevitable. What if the same poor judgement is at work when it comes to deploying and using nuclear weapons?

The second Cold War against Russia is turning out to be a lot more dangerous than was the first between the late 1940s and 1989. For more than 40 years, the menace of a nuclear war – Mutual Assured Destruction – hung over the world and was a constant preoccupation. Nuclear bunkers were built to safeguard government and military elites. American schools held drills to tell teachers, pupils and parents what to do in the event of a nuclear strike. The plot of the film Dr Strangelove, which turns around a deranged American general ordering a nuclear attack on the Soviet Union, seemed all too realistic.

Yet, since the end of the first Cold War, the threat of nuclear annihilation has been largely forgotten, though the means to carry it out are the same as ever. Nobody paid much attention as long-negotiated treaties regulating the deployment of nuclear weapons and other military dispositions were discarded or allowed to lapse. The Anti-Ballistic Missile Treaty was abrogated by the US in 2002, the Conventional Armed Forces in Europe Treaty was suspended by Russia in 2007. Three years ago, President Donald Trump abrogated the Intermediate-Range Nuclear Forces Treaty, while military-to-military contacts aimed at preventing an accidental confrontation between the US and Russia became infrequent.

This blithe disregard over the disappearance of measures designed to prevent a nuclear apocalypse stemmed from the fact that most people assumed that the threat of war between the US and Russia, which together possess 93 per cent of the nuclear weapons in the world, had disappeared.

In retrospect, this confidence seems strange because friction between the two great nuclear powers had been steadily increasing in Ukraine since at least 2014, while in Syria, American aircraft had killed Russian soldiers. The Russians asked what was the purpose of Nato, if it was not directed against them?

Putin put his own existence and that of his regime at risk by launching an invasion that could only have succeeded if the Ukrainians had been yearning for Russian liberators. Almost all the Russian units that were around Ukraine two weeks ago have now been deployed, but Russia is still far from winning a victory.

It may succeed in taking Kyiv, Kharkiv and cities, but only by the massed use of artillery, and even that outcome is uncertain. And while these sieges go on, people across the world will be watching pictures of dead and injured civilians caught by Russian bombardments as they try to flee their homes.

Suppose that the Russian army does finally take over the cities. It will have to garrison them and combat guerrillas in the countryside. Because the Russians do not have anything like the number of troops necessary to suppress a popular insurrection and have no local allies, they will presumably have recourse to terror, pummelling towns and villages from the ground and air and turning their inhabitants into refugees. Atrocities will feed popular demands in the West for tougher sanctions against Russia and more help for the Ukraine resistance. In Russia, Putin will seek to play the patriotic card and claim that Russia is under attack by inveterate enemies determined to destroy it.

And as the war in Ukraine increasingly sucks in other powers and Putin becomes more desperate, the likelihood of a nuclear exchange will increase.

The world capitalist economy is in a manufacturing recession now, but there are important indicators that the rest of the economy will join manufacturing soon. Michael Roberts is an Economist in the City of London […]

Simon Wren-Lewis discusses how the political divide that has become clear since the Brexit vote (and which is also clear in US support for Trump) is between towns and cities, not between regions. Cross-posted from […]

Steve Keen – “What is Money and Where Does it Come From?”

A long, but fun read for the weekend. Do enjoy! Final script & first sketches for Chapter One of “What is Money and Where Does it Come From?”   This is the final version of […]