The weakness of Boris Johnson’s government and of his political personality was the necessary consequence of a contradiction at the heart of the politics of Brexit.

Peter Ramsay is Professor of Law at the London School of Economics. He is also one of the founding editors of The Northern Star

This article originally appeared at The Northern Star 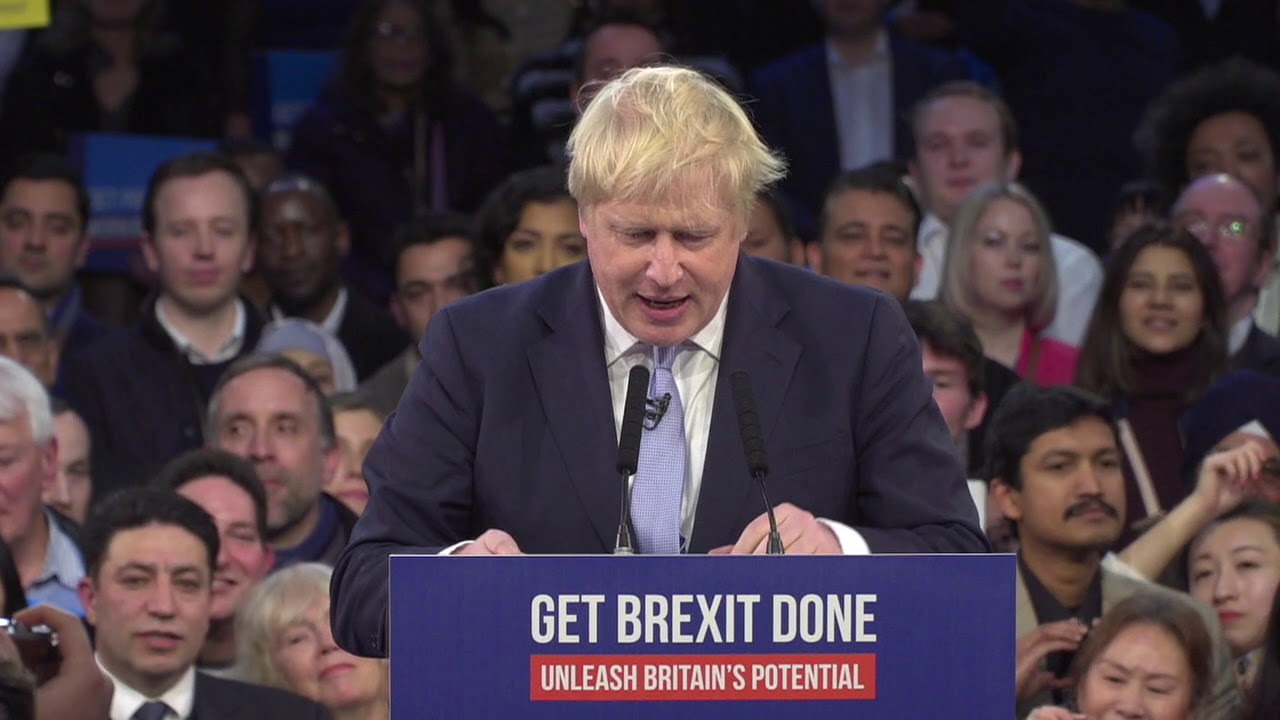 Boris Johnson will certainly go down in history as the prime minister who ‘Got Brexit Done’. The significance that history will attribute to the Brexit that he got done remains to be seen, however. Johnson did democracy an important service by ensuring that the majority decision of 2016 was enacted, and that democratic participation remained meaningful. He could not, however, advance the cause of democracy or national sovereignty much further than this.

Many supporters of Brexit see his downfall as the work of a Remain elite. A coalition of liberal journalists, disgruntled civil servants, Tory critics and opposition politicians have avenged themselves for Brexit by keeping a succession of government scandals, most of which were small beer by historical standards, constantly in the public eye. At the same time, the same critics had no substantial objection to his government’s most significant and disastrous policies: the Covid emergency regime and his energetic role in NATO’s war effort in Ukraine. Brexit supporters are right to fear that these liberal hypocrites now have some wind in their sails. A weakened Conservative government is vulnerable to a Blairite coalition of opposition parties that do not hide their hostility to national sovereignty, civil liberty and democratic government.

This story is true. But it is an inadequate explanation for anyone who wants to advance the democratic cause of Brexit and prevent its defeat. Of course, elite Remainers/Rejoiners will never forgive us for Brexit, and they will continue to scheme against it. We need to attend to what is allowing liberals to claw back lost ground.

One common explanation lies in Johnson’s own failings. His government was vulnerable to the liberals’ attacks primarily because he made nothing of the electoral mandate and the huge parliamentary majority that he won in 2019. Though he had the mandate and majority to mount a bold reordering of the state, economy and official culture following the UK’s departure from the EU, he did not attempt it. Instead Johnson drifted back into the globalist elite quagmire, pursuing the repressive inflationary policy of lockdown and the disastrous proxy war with Russia. ‘Levelling up’ was mostly talk; investment in new productive industries was barely to be seen; efforts to reverse the influence of the authoritarian liberals’ poisonous identity politics in the state bureaucracy and public education were limited and unsystematic, although they allowed for plenty of noisy culture war posturing.

Many see the explanation for this failure to deliver in Johnson’s peculiar political personality: a buffoonish toff with the common touch; an insouciant, light-minded opportunist; a paid-up member of the cosmopolitan elite turned populist. His political approach is apparently chaotic and, although he was the most left-wing Tory leader in generations, his departures from Thatcherite orthodoxy were improvised. Notwithstanding the immense political realignment he seemed to achieve in 2019, with northern Labour constituencies going over to the Tories for the first time, there was never so much as a hint that there might be a Johnsonism to replace Thatcherism and turn that realignment into a lasting political movement. This is all the more remarkable given that there is plenty of support for the idea that the electorate favours a Red Tory/Blue Labour combination of social conservatism and economic leftism, something that Johnson seemed well placed to deliver in 2019. But, in the absence of any new political movement, the Blairite blob has gradually been able to reassert itself. As with the ‘revenge of the Remainers’ explanation, these shortcomings of Johnson are real enough. But to blame his downfall on his own personal failings is to put the cart before the horse.

Brexit was the political work of Thatcherites (both inside and outside the Tory party), but it depended on the votes of millions whose discontent was a result of the very neoliberal consensus that Thatcherism itself established a generation ago. These voters supported Brexit for quite different reasons from the Tory Brexiteers. The Thatcherite case for Brexit makes some sense in its own terms. The UK’s political economy has always differed from that of Germany or France; the UK’s interests were consistently outvoted in EU institutions; and this divergence of interests only got worse as the EU became increasingly focused on the crisis of the Eurozone. British capitalism might take a short-run hit from Brexit but in the long term its interests lie elsewhere. However, in the 2018 British Social Attitudes survey a mere four percent of the electorate were supportive of the Thatcherites’ vision of low regulation, low tax, low public spending. Working class Leave voters, who were essential to both the referendum result and the Tories’ 2019 victory, supported Brexit in an effort to get their very different interests onto the agenda of British politics. Especially in those parts of England and Wales that the Westminster oligopoly had ignored in the decades of neoliberal ascendancy, Leave voters took the opportunity to overturn the status quo in the hope of improving labour market conditions and public service provision. In other words, the motivation for much of the vote for Brexit was flatly opposed to that of its Thatcherite leadership.

Johnson’s leadership of the referendum campaign and the subsequent struggle to enact the referendum result served to paper over this contradiction. Throughout the referendum campaign, and the Brexit crisis that followed, the Brexiteers were forced to tack against austerity, promising their new-found northern voters state spending, and stealing policy positions from Corbyn and Farage alike to get elected. Johnson’s populism was liked by Leave voters generally and he was willing to spend money, which reassured the Red Wall voters. But if, once in government, he had developed his election mandate into a full-blooded Red Tory programme of pro-worker conservatism, it would have rubbed up against his Thatcherite party, still dreaming, delusionally, of its buccaneering, low tax, free market Brexit. Since Johnson was not the kind of leader to articulate a principled, coherent programme, the underlying contradiction could be avoided for a while. Covid and Ukraine both supplied classic technocratic evasions: purported emergencies transcending everyday politics. These could be combined with some good, old-fashioned populist Brussels-bashing over the Northern Ireland Protocol, and migrant-bashing with Priti Patel’s showy Rwanda scheme. But after two a half years of uninspiring government, the inability to deliver on the 2019 mandate was increasingly exposed. Johnson became increasingly vulnerable as the Remainer revenge campaign unnerved an already frustrated party of Thatcherites. Without delivery on his mandate to excuse his misdemeanours in office, Johnson looked less and less like a winner for the Tories, giving the Thatcherites their opening.

Whoever replaces Johnson will nevertheless be stuck with the same contradiction between their mandate from Leave voters and the Tories’ basic political orientation. Indeed, the six-month long campaign to unseat Johnson was as politically lacklustre as his government, and showed that plenty of anxious Tory MPs are aware that they may be unelectable without him. The Tories have an opportunity to steal a march on the opposition in the culture wars by electing a leader who will become the first ever prime minister from an ethnic minority. But beyond that, the contenders’ policy platforms look like being a wearily familiar diet of tax cuts and deregulation, coupled with more culture wars posturing. Perhaps Suella Braverman or Penny Mordaunt will grasp the nettle, but it seems unlikely. Even a fresh-faced, potential new broom in the Conservative Party like Kemi Badenoch, despite appearing to recognise the scale of the challenge at hand, is unable to grasp that free markets are not the basis for reviving sovereignty.

On the contrary, the authority of the nation-state has been thoroughly undermined by the Thatcherite dogma that ‘there is no alternative’ to the market. Nor do markets lead to freedom of expression or conscience. Censorious authoritarian liberalism has established itself during the past 30 years of neoliberal supremacy. The degradation of national sovereignty and democratic freedoms is exactly what happens when politics is reduced to technocratic quibbling and hyperbolic culture wars. If the Tories do retreat back to the exhausted politics of the past then the authoritarian liberals may yet manage to do what the People’s Vote campaign could not, bringing clapped-out Blairism back to power through the abstention of a demoralised working-class electorate.

The lesson that the Johnson years should teach democrats is that populism’s invocation of the people is empty of political content. Johnsonian populism offers a textbook case of the collapse of populism into technocratic government. Populists in Italy, France, Hungary and elsewhere have talked a fine culture war, but evaded the tasks of national sovereignty. When Italian populists of the League and the Five Star Movement came into government in 2018, they quickly deferred to the old technocrats. By contrast, British populists under Nigel Farage put national sovereignty at the centre of their campaigning. But when Johnson stole Farage’s populist clothes and took them into government, he, like the Italian populists before him, fell at the first hurdle, having no alternative to the technocratic lockdown elite when Covid came along. And Johnson quickly followed this with bellicose Churchillian LARPing that put him right back in the middle of the globalist liberal elite and its foolhardy attempt to fuse humanitarian intervention with a rerun of the Cold War.

Populism can posture against cosmopolitan authoritarian liberalism, but it has no way to move beyond it. Populism is a way of exploiting popular discontent with the elite’s self-serving ideology, while avoiding the hard task of replacing that elite. To move forward requires a democratic movement that, by contrast with both populism and the Thatcherite Eurosceptics, does not merely indulge in the rhetoric of national sovereignty, but takes the political nation and its self-government seriously as the basis of its ideas and policies. Populism is an evasion of the hard political tasks this involves. Populists will all go the way of Johnson.

Branko Milanović – “The World Turned Upside Down” – a critical review

We do not even seem to know how Mao was spending his days—but whatever he was doing he was not running the government in the way governments are commonly run by autocrats. Branko Milanović is […]

On 12 September, the European Parliament voted to pursue disciplinary action against Hungary for breaching the EU’s core values. Angelos Chryssogelos argues that although the vote has frequently been explained with reference to the internal […]

DeSmog – New Study Reveals Billions of Dollars in Political Spending by US Trade Associations, Most of It on PR

Out of $3.4 billion spent by trade associations over 10 years, nearly $2.2 billion went towards advertising and promotion, with the oil and gas industry the biggest spender. By Dana Drúgmand Cross-posted from DeSmog Industry […]