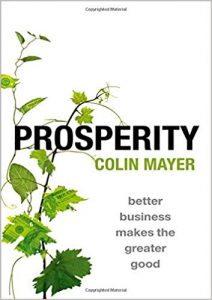 Capitalism needs a re-think – large swathes of economists and policy-makers would agree with that. But how do you change the nature of a company – that building-block of capitalism – radically enough to make the world a better place? Colin Mayer, professor at Oxford University’s Said Business School, has obsessed about this more than most, and he has some answers.

First, out goes Milton Friedman and the notion of “shareholder value” as a company’s primary goal. A company is there to create something and provide solutions. It should be able to define its “purpose”, and that is what should drive the decisions of all its executives, owners and board members. Companies which are run on those lines – and there are a few – tend to turn out more profitable and longer-lived anyway, while enjoying the goodwill of customers, employees, owners, managers and the world in general. Mr Mayer cites Bertelsmann, Bosch, Mars, Unilever and the John Lewis Partnership as examples. So many once-similar companies, such as Cadburys, Rowntree and GKN, gave up family control to fund their expansion and ended up in the hands of capitalist predators – shadows of their former selves.

Colin Mayer goes back to the origin of the corporation, in ancient Rome, the societas publicanorum which was there to serve not just its owners but the wider population. Mediaeval partnerships and early joint-stock companies were a means of spreading personal exposure to risky ventures such as shipping cargoes and building railroads. The British East India Company was more-or-less a licensed arm of government with its own army and legal system. All these were types of corporation. And they had a purpose – to achieve something beyond making a profit for providers of capital. But, in the 20th century, something went wrong.

The running of companies degenerated into a game of dodging taxes and regulators and “enhancing” shareholder value, with short-term gains masking the long-term hollowing out of many businesses. Worse, traditional accounting practices completely disregarded such factors as damage to the environment, use of finite resources without replacing them, the social effects of asset-stripping, or conversely the effect of a company contributing to the public good.

Mr Mayer wants that to change. A company has many types of capital besides its financial value: natural capital (its positive or negative contribution to the environment); social capital (its effect on society  –  for example when it burdens social services by sacking employees); human capital (its workforce); material capital (infrastructure and other fixed assets). All these types of capital should be considered when valuing a company, its viability and its contribution to society. If such values were taken into account many rapacious corporate takeovers would probably have been blocked or simply not considered.

British and American corporate culture, dogged by wide and dilute shareholdings, has made UK and US companies particularly prone to short-term management practices. The giant investment institutions such as BlackRock, Vanguard and UBS, which control large blocks of shares in top-listed firms, could in theory encourage longer-term management thinking, but their involvement in the governance of corporations is still rudimentary.

Corporate culture needs to change from within, but better regulation and tax policy can help. The widespread policy of granting companies tax relief on interest payments means that corporate capital is often weakened by too much debt rather than equity. That could be ended with the stroke of a pen.

Mr Mayer’s heaviest criticism, however, is reserved for the “useless” financial sector: “Nowhere is there a worse alignment between the provider and the purchaser.” He cites one US study which shows that in 130 years there has been literally no improvement in the productivity of the financial sector – though with fintech that may now finally be changing. He worries that the rise of the “shadow banking” sector means that increasingly corporate financing is being done outside the ambit of regulated banks. In the event of a widespread failure of shadow banks the economic consequences would not be dissimilar to that of the formal banking sector, he argues. There would be an impact on corporate financing, money-market investments, and the savings of investors. That may be so, but on this point I disagree with Mr Mayer. A failure among shadow banks should be digestible, that is, provided the regulated banking system is not heavily exposed to those shadow banks – as it was in the 2008 financial crisis. Any investor via the shadow banking system is laying himself open to the principle of caveat emptor – without state-backed deposit insurance or any too-big-to-fail guarantee. Why then should the state step in?

Mr Mayer thinks the risk of such a melt-down could be mitigated by oversight of banks and shadow banks on the principle of “functional equivalence”. i.e. a loan that looks like a bank loan would be regulated as such regardless of whether the lender is a regulated bank or not. This smacks of micro-supervision on a giant scale, so good luck with that.

The aims of this book are highly relevant to today’s debate on the nature and purpose of companies, private or public; on the question of how vital infrastructure is financed – given the failure of many public-private partnerships and private finance initiatives; on how the impact on the environment should appear on corporate balance sheets and investment decisions; how the social value of companies should be factored into their overall valuation; and the question of what wider responsibilities should come with owning shares, or managing a company.

There is some repetitive material in the middle of the book which might have been cut to make it a pithier read. Perhaps something to bear in mind for the next edition of a book which deserves to be widely read and taken note of.

The Case for a Four Day Week By Anna Coote, Aidan Harper, and Alfie Sterling

The Wealth Paradox: Economic Prosperity and the Hardening of Attitudes By Frank Mols and Jolanda Jetten