In 2017 a minimum wage was introduced (!) in Germany. It was only 8.84€ per hour. Leading economists like Hans Werner Sinn, Germany’s chief neo-liberal ideologue, predicted an increase of one million unemployed. Not only did unemployment not increase, it dropped. 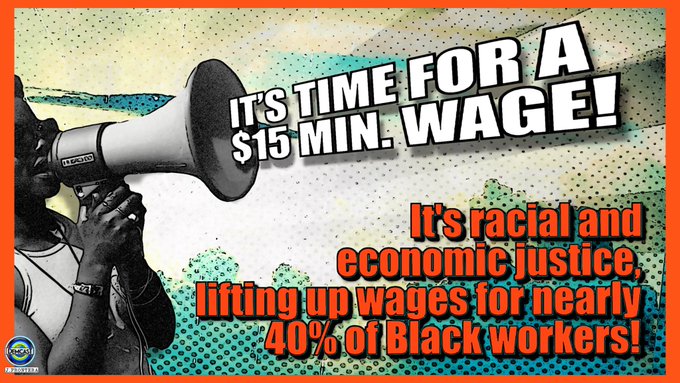 Capitalism’s “conservative” defenders yet again oppose raising the minimum wage. They fought raising it in the past much as they tried to prevent the Fair Labor Standards Act (1938) that first mandated a U.S. minimum wage. The major argument opponents have used is this: setting or raising a minimum wage threatens small employers. They may collapse or else fire employees; either way, jobs are lost. What is conveniently assumed here is a necessary contradiction between minimum wages and small business jobs. That assumption enables opponents to claim that not setting a legal minimum wage, like not raising it, saves jobs. The system thus presents very poorly paid workers with this choice: low wages or no wages.

“Liberals” in the United States have mostly accepted the assumption of that contradiction, the necessity of that final choice. However, they try to demonstrate that the social gains from a higher minimum wage would exceed the social losses from the reduced employment they admit. Their idea, in effect, is that a higher minimum wage would increase demand for goods and services. Any workers fired because of the minimum wage would be rehired elsewhere to meet the rising demand. Countless empirical studies by conservatives and liberals yield, as usual, correspondingly conflicting conclusions.

In the actual history of U.S. capitalism, the minimum wage has been undercut from the outset. In real terms (what the minimum wage can actually buy), its long-term decline began from a peak in 1968. It was last raised in 2009 (to $7.25 per hour) despite a rising consumer price index every year since then. U.S. business interests plus the “conservative” politicians, media, and academics they support have inundated the public with the idea that raising the minimum wage will hurt poorly paid workers (by losing mostly small business jobs) more than help them. This debate over the minimum wage, intensified whenever proposals to raise it gain public attention, has been “won” chiefly by the conservative/business side.

Despite its political effectiveness for conservatives and big business till now, their argument—like the entire debate—is flawed logically. Its underlying, shared assumption is unnecessary and inaccurate. It serves chiefly to undercut the level, purpose, and social effects of the minimum wage in the United States.

Few dare quarrel with the notion that in the U.S. today, paying the federal minimum wage of $7.25 per hour is an outrage against decency. It is among the very lowest minimum wages of industrialized economies: quite the achievement for one of the “richest countries in the world.” So the defence of such an outrage has always begun by focusing attention elsewhere. We are asked to sympathize with the small businesses whose profits and thus viability will be undone if they are required to pay a raised minimum wage. We are asked likewise to sympathize with the plight of minimum wage workers who will become jobless when their employer cannot pay a raised minimum wage. Thus the conclusion beloved by opponents of raising the minimum wage: it lies in the interest of low-paid workers and small businesses to join the opposition to raising the minimum wage.

So many flaws attend such logic that it is not easy to decide where to begin its demolition. We might note that it clearly implies that were we to drop the minimum wage even further, below $7.25 per hour, we might achieve lower unemployment rates. But that is so gross an idea that right-wingers rarely go there. They don’t dare.

There is a parallel example we can draw from the history of wage workers when they included children as young as five years old. The parallel logic then held that allowing child labour (with the oppression and abuses it entailed) was doing poor families a favour. Were child labour to be outlawed, capitalism’s defenders then insisted, two tragedies would necessarily follow. First, poor families would suffer an income loss because they could no longer sell their children’s labour power to capitalist employers for a wage. Second, businesses whose profits depended at least partly on low-wage child labour would collapse and render adults jobless too.

It is important to note that after sustained political agitation, child labour was in fact outlawed. The logic of its defenders was rejected and rarely resurfaced afterward even in right-wing and “conservative” literature. Former capitalist employers of children found other means (paying adults more, improving productivity, economizing on other inputs, and so on) to profit and grow. As we know, U.S. capitalism over the last century prospered without child labour. And where U.S. capitalists relocated abroad to employ children, opposition there has replicated what happened in the United States, albeit slowly. What happened to child tabor can and likely will happen as well to abysmally low minimum wages.

The debate over the minimum wage has been lopsided for a very long time. Uncritical media coverage of the debate has allowed big business to evade its proper share of paying to sustain a viable small business sector. Meanwhile, workers and small businesses pay taxes that favour big business. Most Americans want a thriving small business sector. Most also increasingly criticize big business: “antitrust” remains part of government regulation as well as a part of popular ideologies. We can and should correct the old debate now to enable a different political coalition to shape minimum wages in a different way from the past.

Young people between 15 and 24 are likely to experience the greatest difficulties in finding work in the years ahead. Their transition to their first job and, more generally, to making a life of their […]

So the coronavirus slump will be deep and long lasting with a weak recovery to follow and could cause a financial crash.  And working people will suffer severely, especially those at the bottom of the […]