Joining ‘tax cuts for growth’, the latest dodgy economics trend in the Conservative leadership contest is an obsession with the money supply. This might sound like an intuitive response to inflation, but it misdiagnoses the problem and risks making things even worse.

Simon Youel is Head of Policy and Advocacy at Positive Money 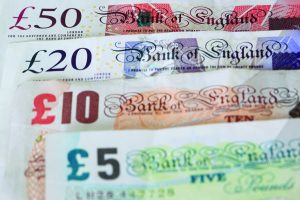 While he was in the running for leadership of the UK Conservative Party, Tom Tugenhadt told BBC Radio 4 that ‘what’s triggering inflation is the lack of sound money,’ and that ‘we have not been tough enough on the money supply.” He points the blame at quantitative easing (QE), the process by which the central bank creates new money by buying government bonds:

‘I’m afraid [that with] the QE that has been pumping up the economy and inflating a sugar-high of growth in different ways….what we’ve actually done is we’ve lowered the cost of money’.

His competitor Liz Truss echoed this theory, arguing in the leadership debate that we have inflation “because we have not been tough enough on the monetary supply”, and suggesting the central bank should be targeting this directly. Former party leader Iain Duncan Smith also chipped in on Sky News to blame inflation on the Bank of England “printing huge sums of money”.

When people talk of ‘printing money’, they often conjure up images of Weimar Germany and wheelbarrows full of banknotes we are shown in school, which seems to have seared into the public psyche the idea that it is the printing of new money itself which always leads to high inflation. The reality is usually more complex.

The implication of the ‘money printing’ story is usually that when governments and central banks create more money, they are simply throwing newly printed notes into the economy (perhaps by helicopter, as in Milton Friedman’s famous parable). But the reality of how QE works is rather different. Firstly, there’s the minor point that QE doesn’t involve the central bank printing any new notes, but rather the creation of central bank reserves (the money that commercial banks hold in their accounts at the central bank).

Secondly, and more importantly, there is the fact that these central bank reserves are not handed out for free, but are exchanged in return for government bonds. These bonds are extremely ‘money like’, in that they are highly liquid and can be easily exchanged for money. In essence, this means the central bank is simply swapping one form of public debt (or ‘money’) for another, which in itself creates no new purchasing power overall. The difference between these two forms of public debt collapses when interest rates are low, as they have been over the past decade. What is happening is essentially the state deciding to have more of its debt held in the form of central bank reserves rather than bonds. And this isn’t the state imposing its will on the private sector; those holding government bonds have volunteered to exchange them for ’cash’.

This is not to say that QE has no impact. The main way QE affects the economy is through the ‘portfolio rebalancing’ channel. The central bank typically buys bonds from institutional investors like pension funds who, rather than spending the money they’ve received, will look to invest it elsewhere. This increases demand for other assets like housing, and has fuelled inflated house prices, but it has little impact on the consumer price inflation politicians are more worried about. Eventually some of this money may trickle down into the real economy, but to blame inflation on this process specifically is blind to the more obvious causes of inflation, such as supply shocks and surging energy prices.

So why did central banks do QE during the Covid crisis? The simplest answer is that liquidity was drying up as markets panicked and sold off bonds in the ‘dash for cash’, at the same time the government needed to undertake huge spending in response to the pandemic. If the central bank hadn’t stepped in and created money to buy these bonds, it is likely that bond prices would have collapsed and yields on government debt surged, increasing the cost of government borrowing. It is doubtful whether this is really a scenario Conservative MPs would have preferred. Whether the Bank of England’s intervention could have been done better or offset with other policies (such as taxes on the wealthy) are better questions, but ones which are being ignored by focusing on the money creation itself.

This obsession with the money supply appears to be a revival of ‘monetarism’, a school of thought which claims that inflation is always a monetary phenomenon, and so the way to control inflation is through controlling the money supply. Monetarism was a key influence for the early years of the Thatcher government (and to a lesser extent previous governments), and it was an abject failure even on its own terms. Policymakers struggled to find a measure of the money supply that was an adequate target, and inflation continued to rise despite their best efforts. This was not least because they focused on targeting the supply of state money (such as central bank reserves, banknotes and coins), whereas the vast majority of money in the economy is credit money created by private banks. Eventually inflation was brought down under Thatcher, but only after high interest rates engineered a recession and high unemployment. If you make enough people poor enough, prices will have to come down.

There are important conversations to be had over whether monetary policies like QE should be relied on to manage demand. But laying the blame for our economic woes on money printing is a distraction.

Rather than being the root cause of our problems itself, the use of QE to stimulate the economy is a clear sign that politicians aren’t doing enough with fiscal policy (taxing and spending). Meanwhile, introducing ‘tighter’ monetary policy won’t do much to bring down inflation without causing a recession, especially when the inflation is driven by supply shocks.

Strangely, Liz Truss has suggested the Bank of Japan (BOJ) as a model to replicate, perhaps because they have lower inflation rates than any global north country. Ironically the BOJ was the first to introduce QE and has been creating huge amounts of money to buy up government bonds, in a bid to try and get inflation up to target since the bursting of a huge asset bubble in the 1990s brought in a deflationary spiral. Unless Truss wants the Bank of England to do the same with Britain’s housing bubble, it’s not clear how she intends to emulate the Japanese while getting tough on the money supply.

Conservative leadership contenders like Truss are right that the Bank of England’s mandate shouldn’t be set in stone. The mandate should be continually reviewed to ensure it remains fit for purpose and reflects the challenges of the time, as we saw when Rishi Sunak updated the Bank’s mandate to support the Net Zero transition last year. But reviving failed monetarist attempts to target the money supply is entirely the wrong direction.

Robin McAlpine – Liberal Democracy has Failed because it has Abandoned Democracy

This has to be the best and most thorough micro-analysis of the failings of Liberal Democracy. Just replace Scotland with the name of your nation, do the same with the names, organisations, etc, substituting with […]