This newest phase of UK University Strike has entered its fourth an final week. This strike is about much, much more than economic demands. It is about saving universities, one of the fundaments of our Western Civilisation, from being transformed into commodities. 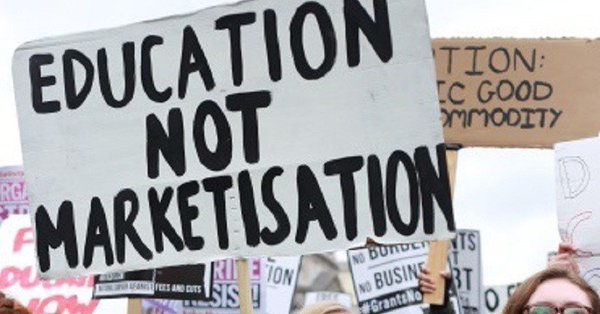 By the end of this week, staff at 74 Universities will have striked for 36 days between 2018 and 2020 in what is the biggest strike in the history of Higher Education in Britain. Striking has not been easy for any of us. We stood on the picket lines for hours every day, braved ice cold temperatures, snow, rain, and storms. So far, strikers have already sacrificed more than a month of pay. Many will face financial hardship, as several employers are taking a punitive approach and threaten to take all strike deductions from the current round of strikes in one month, rather than spreading it across three, as union branches have requested. Despite the considerable impact of the unresolved dispute on the well-being of students and staff, the employers, after 24 days of striking, are still reluctant to make any serious offer and appear to be deaf to their staffs’ concerns. At the time of writing, the threat of further balloting and escalation of the dispute into the summer months is looming.

Colleagues have written about the human side of the UCU strikes (e.g. Emily Hart and Sam Woodford in BRAVE NEW EUROPE) reflected on the amazing and consistent solidarity we have been receiving from students, and on how the UCU strikes have reanimated a sense of community long thought lost at British Universities. Colleagues also wrote about the wider societal implications: Lee Jones highlighted the important connection between our working conditions and the creeping marketisation of the sector under conditions of late capitalism; Michael Mair predicted a tectonic shift in the power relation between University managers and staff, and Phil Leeke (all in BRAVE NEW EUROPE) emphasized that we are fighting for the very soul of the University. I’d like to reiterate and add to both Michael’s and Phil’s points.

Beyond the industrial dispute over pensions, pay and equality, the UCU strikes have raised important questions about the very way, Universities are run. How can senior managers explain the blatant corruption that has been leaking into the mainstream media over the last two years? What justifies vice chancellors taking home salaries of more than £ 300,000 per annum, while several of their own institutions’ casualised teaching staff have to go to food banks to get by? Why is the blatant culture of top-down managerial bullying that has become rampant across the sector not addressed? And, importantly, how does the current mode of governance of Higher Education affect University staff and students?

To contextualize, the severe cuts to public financing of UK Universities during the last two decades, the introduction and increase of student fees to up to £9,500 p.a., which are now Universities’ main source of income (see the UK Parliament’s research briefing from 16 Dec 2019 for detail: https://researchbriefings.parliament.uk/ResearchBriefing/Summary/CBP-7973) signify a creeping marketisation of British Higher Education, which seems to have accelerated since 2012. This marketisation brought about a marked increase in private sector style performance management. Professional Development Review (PDR) meetings with line managers used to have career development as their main purpose, but have now morphed into a performance management tool, designed to control and monitor staff. What was known as the Research Assessment Exercise in the 1990s has transferred into the Research Excellence Framework (REF). In addition, new performance measurement tools were introduced, the Teaching Excellence Framework (TEF) in 2017, and a new Knowledge Exchange Framework (KEF), which is to be launched this March 2020. These new ‘excellence’ frameworks/performance management tools are designed to control and discipline academics and to subject them to ever increasing performance pressures. Working at British Universities increasingly feels like being trapped in a giant (student-) income generating machinery that is also a panopticon – forever line managed and subjected to increasingly unachievable targets, designed to ensure that employees are always vulnerable, while senior managers are not held accountable by anyone – except by the campus trade unions.

This new, hyper-capitalist mode of work in the marketised panopticon machinery University kills creativity and innovativeness – traits that are widely considered necessary in order to be able to produce high quality academic work. What we are experiencing here is indeed, in Phil Leeke’s words – a ferocious attack on the very soul of the University.

In their eagerness to control & manage workers in Higher Education, the makers of REF, TEF and KEF have, furthermore, shown a blatant disregard for principles of measurement accuracy, validity and indeed for the very principle of academic integrity itself. The most blatant example is, perhaps, the TEF measure. It is made up of student destinations & earnings, drop-out rates, and student satisfaction scores from the National Student Survey (NSS) – the combination of which is supposed to measure ‘teaching excellence’. However, nowhere in its guidance documents does TEF define, what is meant by ‘excellence’. The Royal Statistical Society, the UK’s leading professional body for statisticians, has between 2016 and February 2019 repeatedly raised serious concerns about a lack of transparency in how TEF was constructed and pointed out several fatal flaws of the data and calculations used (see here for detail:f). All these flaws render the TEF measure utterly invalid. Yet, despite these warnings, no changes to TEF have been made. The Ministry for Education and UK Funding Councils happily continue to use this debunked and utterly invalid measure. Their disregard for scrutiny and for the evidence provided by the RSS is unethical. The irony is staggering and reminiscent of a Monty Python satire: Institutions who openly disregard both evidence and knowingly violate the very principle of academic integrity use invalid evidence obtained through usage of poor measurement instruments to scrutinize academics.

The irony of this bizarre situation could be funny if the consequences of such poor practice weren’t so damaging for the sector. TEF and REF have huge ramifications for Universities’ survival, because in today’s highly marketised sector, they depend on performing well in University rankings for their (student and funding) income, alas British University rankings rely heavily on TEF and REF scores.

So, what can and should University workers in Britain do? A good start is to join their local trade union branch and to join their colleagues on the picket lines. The UCU has consulted on the TEF and REF and has called for both to be scrapped. The current strike action is about far more than just pensions, pay and equality – it is also about the very way, Higher Education in Britain is governed and run. Fruitful and creative discussions about alternatives have already begun on the picket lines, they shall be continued beyond. University workers do not need to be line managed.

We have enormous resources in innovativeness, critical analysis and creativity. We can put this creative potential to excellent use and change the way Universities are run towards a more democratic and sustainable approach. Some academics and institutions are already successfully exploring alternative concepts in practice, such as co-operative University models. We can fight the demon of managerialism and we can win, once and for all. We are the University – so let’s reclaim it!

Pierre Haroche – Whose Backyard? Realism and the shifting balance of stakes in Ukraine

Did NATO expansion into Russia’s sphere of influence provoke the conflict? Pierre Haroche is a Lecturer in International Relations and International Security at Queen Mary University of London Cross-posted from LSE EUROPP  Photo: Oleksandr Ratushniak/Creative […]

Dean Baker – Coronavirus, the Stock Market, and the Economy

Seeing what occurred on the Asian stock markets this morning, we thought we would post this. Dean Baker is a Senior Economist at the Center for Economic and Policy Research (CEPR) Cross-posted from Dean Baker’s […]