Everyone is fearful of inflation because this was pounded into their heads by politicians and mainstream media over decades. It is all they know. But as Steve Keen writes, it is all about debt deflation.

There are many pundits arguing against government action now, on the basis that it will cause hyperinflation, and/or give our children an unsustainable burden of government debt to carry in the future. Here is a sample of such assertions.

The extreme measures taken by the U.S. government and the Federal Reserve to combat the COVID-19 pandemic could push the U.S. into an episode of hyperinflation and boost gold, according to Peter Schiff.

Hysteria has forced the UK into lockdown, crashed the economy and will kill more than coronavirus (UK, The Sun, March 29th)

Hysteria has been fanned by broadcasters with round-the-clock 24/7 crisis bulletins and correspondents declaring: “Protecting public health must come before protecting the economy.”

Wrong. We MUST protect the economy — industry, commerce, retail and financial businesses without whose taxes our precious NHS will shrivel, not grow.

The cost of this lockdown on schools, sport, gyms, pools, golf and civil liberty is incalculable — and not just in hard cash.

We are building a colossal national debt which will take our children’s and grandchildren’s lifetimes to pay off.

The idea of central banks helping governments spend more has raised concerns about a rise in inflation and even drawn parallels with the disastrous hyperinflation of 1930s Germany and 1990s Zimbabwe.

Central bankers dismiss such comparisons, saying those cases involved unstable governments printing notes and handing them out to the public.

But JP Morgan strategist Jan Loeys said that if central banks eventually shift from their existing bond-buying programmes to direct funding of government spending, then inflation – which is currently low – might reawaken.

“It would also ultimately result in an unsustainable central bank balance sheet and is incompatible with the pursuit of an inflation target by an independent central bank.”

The idea of central banks helping governments to spend more using monetary financing, whereby a central bank prints new money for governments to use rather than the governments acquiring money through taxation or borrowing has raised concerns about a rise in inflation in the future.

It has even drawn parallels with the disastrous hyperinflation of 1930s Germany and 1990s Zimbabwe.

There is no doubt that we’re in an unprecedented situation in economics as well as in health—one look at the US initial weekly unemployment claims data is enough to confirm that. So it’s quite possible that applying any existing experience or any existing theory—including mine—could lead to conclusions that turn out to be wildly wrong. 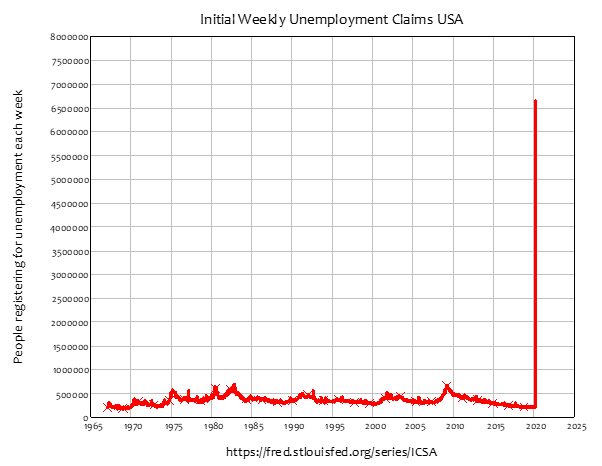 That said, my expectations are that, in the absence of the sort of government rescues that are now being tried around the world, the likely outcome of this crisis is serious deflation. This will be caused by a mechanism that I call “Fisher’s Paradox”, in honour of Irving Fisher, who first identified it as the primary cause of the Great Depression.

Fisher argued that the Great Depression was caused by the twin coincidence of too high a level of private debt, and too low a level of inflation. In this situation, debtors resorted to distress selling, cutting their prices in order to attract a cash flow to themselves rather than their competitors. But because everyone was doing it, prices fell across the board, taking GDP down with it. Debts therefore fell less than GDP, and the private debt ratio actually rose. In his words:

if the over-indebtedness with which we started was great enough, the liquidation of debts cannot keep up with the fall of prices which it causes. In that case, the liquidation defeats itself. While it diminishes the number of dollars owed, it may not do so as fast as it increases the value of each dollar owed. Then, the very effort of individuals to lessen their burden of debts increases it, because of the mass effect of the stampede to liquidate in swelling each dollar owed. Then we have the great paradox which, I submit, is the chief secret of most, if not all, great depressions: The more the debtors pay, the more they owe. The more the economic boat tips, the more it tends to tip. It is not tending to right itself, but is capsizing. “The Debt-Deflation Theory of Great Depressions” (Fisher 1933, p. 344)

Fisher’s Paradox was ignored by mainstream economics, because they subscribe to the fantasy model of banking known as “Loanable Funds”, in which banks are simply intermediaries between savers and borrowers. Fisher was not so stupid (well, not after he was effectively bankrupted by the Great Crash of 1929 anyway). Unlike today’s idiotic mainstream economists—here’s looking at you, Ben Bernanke (Bernanke 2000) and Paul Krugman, amongst many others—Fisher knew that a bank debt was very different to a debt between one non-bank and another:

the payment of a business debt owing to a commercial bank involves consequences different from those involved in the payment of a debt owing from one individual to another. A man-to-man debt may be paid without affecting the volume of outstanding currency. for whatever currency is paid by one, whether it be legal tender or deposit currency transferred by check, is received by the other, and is still outstanding. But when a debt to a commercial bank is paid by check out of a deposit balance that amount of deposit currency simply disappears. Booms and Depressions: Some First Principles (Fisher 1932, p. 15)

The empirical data bears Fisher out: America’ private debt to GDP ratio rose between 1929 and 1933 while the level of private debt was actually falling: 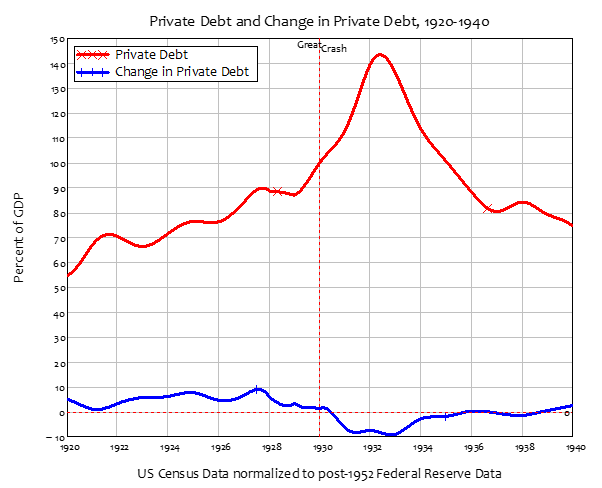 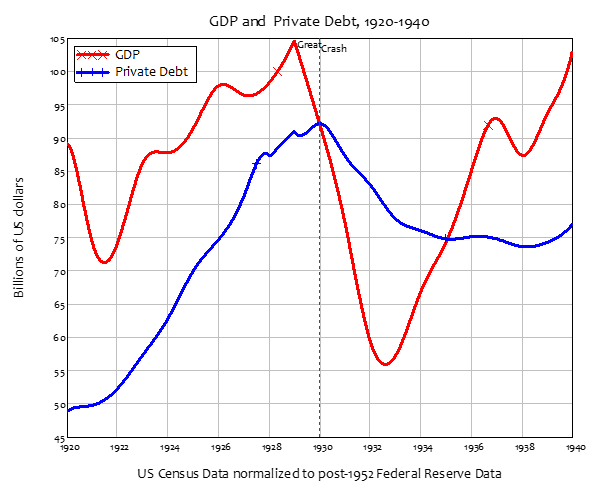 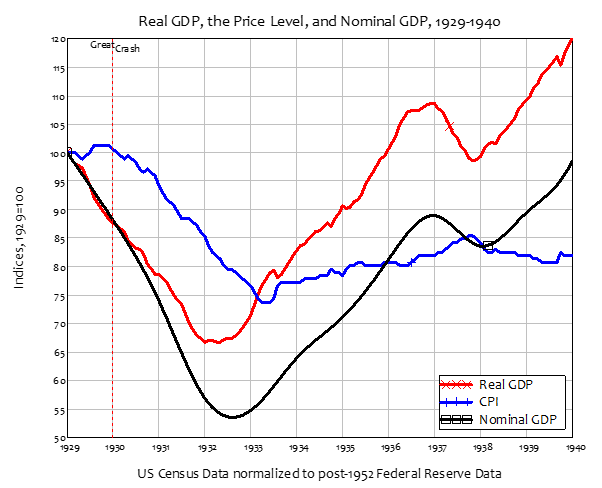 This is why reflation, by Roosevelt’s New Deal (and also his “Bank Holidays”, which allowed insolvent banks to be wound up and their depositors funds transferred to solvent ones), was so important. If the injection of new money by the government hadn’t happened, this private sector chain reaction of liquidation leading to falling prices and an ever-rising debt level could have continued unabated: “The more the economic boat tips, the more it tends to tip. It is not tending to right itself, but is capsizing.”

I don’t care whether you’re a raving Austrian (Hi Peter!) or a raving Marxist, you don’t want this to happen. This is Hyman Minsky’s Financial Instability Hypothesis in the absence of a government sector, and as I showed in my PhD thesis and 1995 paper (Keen 1995), the end result is an economy with an infinite private debt ratio and zero employment.

What’s the relevance of this historical story to today’s situation? It is that the Coronavirus crisis has hit when we still haven’t addressed the run-up of private debt that caused the Great Recession in 2007. Private debt today is higher than it was at the peak of the Great Depression. 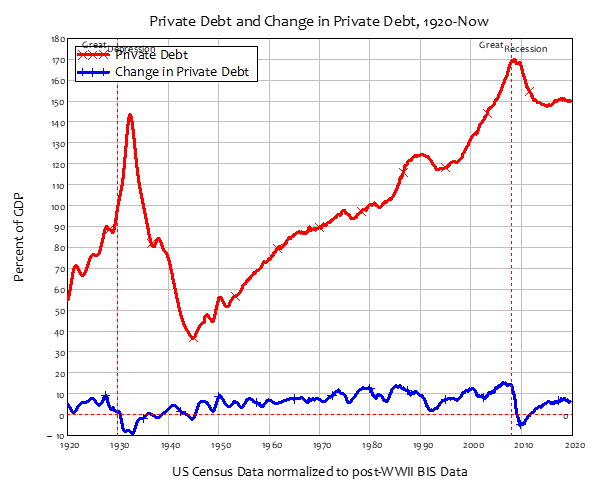 We are therefore on the brink of a debt-deflation, and our policymakers don’t even know it because they take advice from Neoclassical economists who don’t understand the role of private debt and credit in the economy. We need a Modern Debt Jubilee now, or otherwise the damage the Coronavirus is doing to our health and capacity to produce now will be followed by the devastation of our financial system as well.

With the Coronavirus smashing both wages and profits in the US and global economies, the last thing we need is for workers that can’t pay their rents and mortgages, and firms that can’t pay their rents and service their corporate debts, to go bankrupt now. Inflation, which is already low, will turn negative, and the private debt ratio will explode once more, as it did in 1930-1933. Bankruptcies would cause a chain reaction of further failures, taking the banks down as well as the debtors. There would be no floor, especially since the Coronavirus has smashed not just demand but supply as well. Money would be destroyed by both the attempt of debtors to service their debts, and by the collapse of the banking sector as almost all debts turned bad. 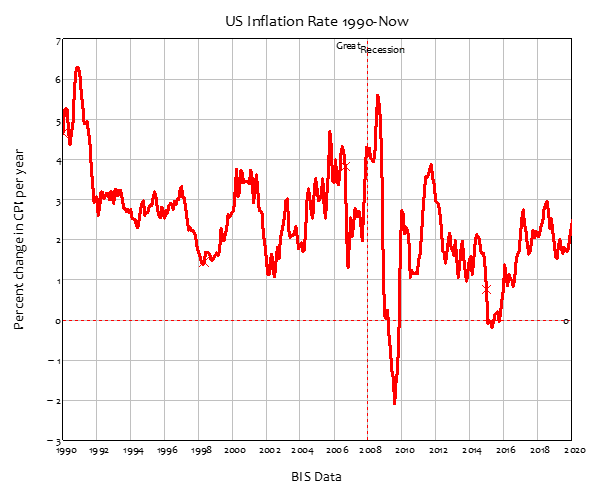 So even if a massive injection of government money now would cause inflation in the future, the alternative is far, far worse.

There’s still a lot of fossil-fuel lending going on. Lucasz Z Paul David Richard Griffiths, EM Normandie – UGEI Over 450 of the world’s banks have committed to a new initiative at the COP26 UN […]

Richard Murphy – Helicopter money is the last thing that we need

Why Richard Murphy considers helicopter money is the wrong policy for Britain at this time. Actually he is updating the contrary relationship between blind GDP stimulus and stopping the climate crisis. Richard Murphy is Professor […]