The EU does not care about democracy or justice in Bulgaria, just cheap labour for Western Europe. So do not expect anything new. 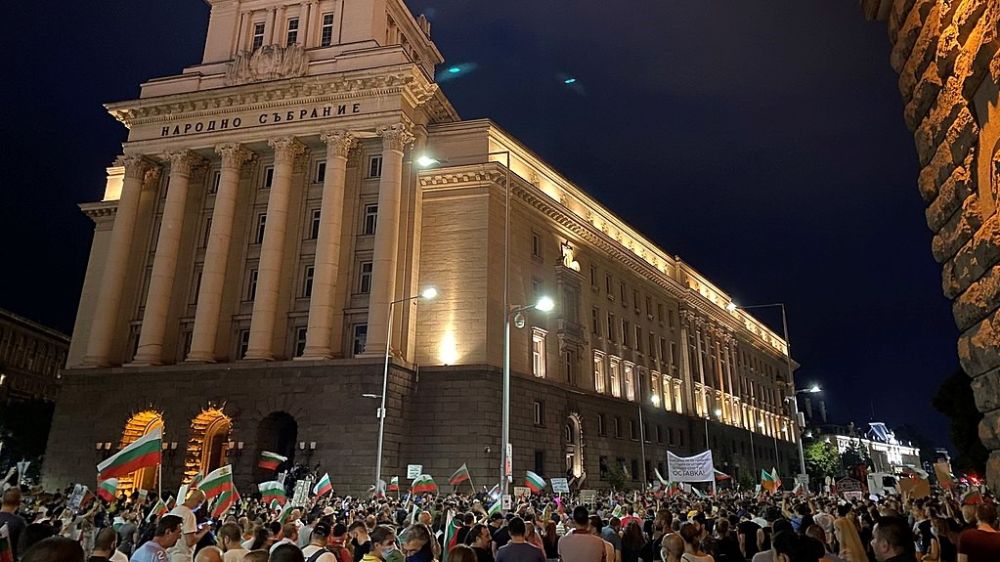 2020 Bulgarian protests next to the Party House, the office house of the National Assembly (Sofia, Bulgaria). Image: Ceep (Creative Commons)

After three consecutive legislative elections in 2021, Bulgaria is heading for another this Sunday, 2 October. The previous government was brought down by a vote of no confidence in June, the first time this has happened in Bulgaria since the democratic transition in 1990. The vote was triggered by the decision of There Is Such a People (ITN), a new populist party created only two years ago, to “stop the agony” by withdrawing its support from the governing coalition.

The collapse of the four-party governing coalition, however, did not come as a surprise. The governing parties (the social-liberal PP, the socialist BSP, the populist ITN, and the DB alliance of liberals, conservatives and greens) were too ideologically diverse to make decisions in almost all policy domains. How did Bulgaria get here? And what will Bulgaria’s future be after this Sunday’s vote?

Contrary to other post-communist countries, Bulgaria soon developed a relatively predictable party system, characterised by a two-bloc opposition between the socialist BSP and the conservative Union of Democratic Forces (SDS). However, the appearance of the former Bulgarian Tsar’s party (the National Movement Simeon II) in 2001 put an end to the fragile stability that had endured until this point.

At the same time, new anti-establishment parties have started to appear. Perhaps the most prominent case is that of Attack, an anti-Muslim far-right party with parliamentary representation between 2005 and 2021, when it was replaced by another pro-Russian and anti-lockdown party (Revival).

According to the latest polls, up to four populist parties have a credible chance to get into parliament this time round. Electoral support for such parties has more than doubled in the last decade, making party cooperation more and more difficult. Considering the war in Ukraine, the Covid-19 crisis, and the current high inflation rates we only can expect another increase in levels of polarisation.

The election in April 2021 was held at the end of the previous parliamentary term and was won by an electoral alliance between the then-incumbent party (GERB) and the conservative SDS. However, as none of the other parliamentary parties wanted to cooperate with the alliance, new elections had to be scheduled for July.

This time it was the populist ITN that won by a very narrow margin. However, ITN refused to cooperate with any other party. Consequently, and due to the excessive fragmentation of the legislature, new elections became inevitable. Surprisingly, a new formation (PP – We continue the change), created around former ministers in the caretaker government appointed by President Rumen Radev in May, won the third elections, which were held in November.

Under huge social pressure, politicians were more willing to cooperate this time. As a result, a very heterogenous coalition government between the newly created PP, the populist ITN, the socialist BSP and representatives of their historical opponents (DB) was formed in mid-December. Given their ideological differences, experts warned of its fragility, predicting that new elections were just a matter of time.

Instead of competing on the traditional left/right divide, since 2001 Bulgarian parties have contested elections on the basis of an insider/outsider, status quo/change, and lately, pro/anti-GERB basis. Because all parties have promised in their campaign pledges not to cooperate with GERB and its partner the SDS, the only alternative has been diverse coalition governments.

Such ideological incoherence has become even more prominent due to the war in Ukraine, Gazprom’s decision to cut gas supplies for Bulgaria, and the Northern Macedonian issue. The BSP is pro-Russian and opposes, together with the ITN, lifting Bulgaria’s veto on North Macedonia’s accession to the EU. This is in clear contrast with the PP and DB which, alongside the opposition alliance (GERB-SDS), have a pro-European position and support both sanctions against Russia and the French proposal for Northern Macedonia.

All of these issues appear to have weakened the importance of the pro/anti-GERB dimension and are shifting party competition towards a conflict over pro-Russian and pro-European positions. This is characteristic of other post-Soviet countries like Latvia, Moldova, and Ukraine.

The creation of a new national-conservative and pro-Russian party, Bulgarian Rise, has further increased the fragmentation of the country’s party system ahead of the 2022 election. Meanwhile, growing support for the anti-establishment Revival is leading to further polarisation. Alongside these trends, Bulgarian politics continues to be characterised by a refusal to cooperate among political parties, which stems from the old pro/anti-GERB divide. Add to this the emergence of a further dimension of competition between pro-Russian and pro-European perspectives, and the future – as we predicted not so long ago – can only be trouble and permanent instability.

This is especially likely if political parties continue, after more than 30 years of democracy, to fail voters’ expectations and remain uncooperative. This, coupled with the current low levels of trust in political parties and the continuous decline in voter turnout might put into question the legitimacy of the results, making yet another election a possibility at the beginning of next year. Bulgaria is thus in danger of becoming a real trendsetter in Europe, where rather than elections producing representation, it is representation that brings about elections.

Jason Hickel – Climate Catastrophe: A Response to Hans Baer’s “Elephant in the Sky”

Climate disaster reaches academia routine. Jason Hickel is an anthropologist who works on political economy and global justice. He teaches at Goldsmiths, University of London. His most recent book is The Divide: A Brief Guide […]

Michael Roberts looks at the Great Davos Neo-Liberalism Show and what is on offer – and what this has to do with reality. Michael Roberts – Economist in the City of London and prolific blogger […]

The German Greens, with its economics minister Bobby Habeck at the forefront, have jettisioned their election promises regarding a clean energy transition and more. Hauke Benner is a former journalist and decade long activist against […]