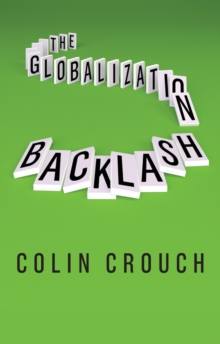 The reaction of ordinary people to globalization gets the blame for many upsets including, for example, the surprise election of Donald Trump in America in 2015, and Britain’s “Brexit” vote in 2016. A popular, or populist, view persists that globalization is responsible for stealing jobs, enriching capitalists and threatening home-grown cultures.

But Colin Crouch, a sociologist and political scientist, Professor Emeritus at Warwick University, makes a careful plea for us not to demonize globalization: globalization just needs to become “smarter” and better regulated. For all its faults it has been a mechanism for digging many countries out of poverty.  The trouble starts later, when nationalism and elitism take over and pervert the process of distributing the new wealth. Result: violence, social injustice and the enrichment of the few.

Mr Crouch would like to see a multi-level world in which local communities, nation states and whole groups of countries co-operate and complement each other, fitting inside the global framework like Russian dolls of different sizes, to the benefit of all. The buzz-word is “subsidiarity”, a much-used EU concept, whereby as many decisions as possible are devolved downward, from the national or supra-regional level to decision-makers ever further from the centre.

The book runs first through the economic arguments and counter-arguments for a world that is either confined to nation states, or one that embraces globalization. Then it does the same for the political and cultural cases for and against globalization. Mr Crouch finds it useful to think of these arguments as parallel to the epic battle in the 18th Century between the Enlightenment and the ancien régime. The trouble with what Mr Crouch calls “hyper-globalization” – totally free of regulation – is that it ends up benefiting only big corporations and the very rich.

So what is the answer? It is certainly not putting globalization into reverse, which would just make the world poorer, he argues. The answer is “smart” globalization which is properly regulated by international bodies and does not kowtow to giant corporations. The EU should lead the charge: “No other organization stands as strong a chance of leading the world to a more civilized globalization than the EU,” says Mr Crouch. The EU’s international institutions are already doing this to some extent, on environmental issues, promoting fairer distribution and facing up to cartels, he argues. He also puts in a good word for the European Parliament, which is still a baby and should be given a chance to foster transnational democracy.

Mr Crouch paints a future for globalization based more on hope than probability, given past experience. The EU, though perhaps not the bastion of neo-liberalism that some accuse it of being, is quite a fortress when seen from the outside. Can the EU truly lead the rest of the world to a more civilized globalization when it has a habit of erecting its own barriers? Mr Crouch is also quite optimistic about the ability of international bodies – living examples being the IMF and the World Bank – to steer sectoral growth where needed without creating moral hazard or getting things horribly wrong, as they have in the past.

This is a worthy attempt to make sense of the economic, political and cultural facets of globalization in one book. And it ends on an optimistic note. Mr Crouch sets his hopes on a younger generation who will more easily accept the idea of multi-tiered loyalties – to community, city, nation, clusters of nations such as the EU. And ultimately the entire world?

The Finance Curse by Nicholas Shaxson

Book review by David Shirreff The problem outlined in this book has deep roots and it shows no signs of going away. The “finance curse” pervades many Western economies, from tiny tax havens to big […]

Book review by Mathew D. Rose It takes courage these days to write a book critical of the EU, especially from a leftist perspective: to do so in Austria even more so. Austria, like Germany, […]