Currently the market is flooded with books about climate change. Many more are on their way. The message of most of these is “The situation has gone from grim to grimmer”. Just as polar bears eventually lost their shock value, so too will these doom and gloom books, if that is not already the case. So which books should one read? 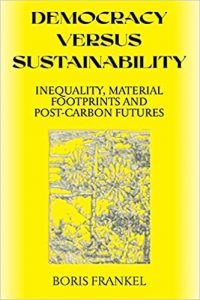 In the meantime I assume that almost everyone who has media access has formed their own opinion concerning climate change. Either they have comprehended how dire the situation is or are on their way to this realisation, are successfully suppressing the fact, or are simply in denial. The US environmentalist Bill McKibben recently insightfully remarked “We spent a long time thinking we were engaged in an argument about data and reason, but now we realise it’s a fight over money and power.” With this in mind, it is time to move on and focus the discussion on what to do and how. The task ahead of us is formidable. The whole basis of our consumer culture and the identity it has provided us with is under threat. The party is over, but what comes next?

Boris Frankel’s “Democracy versus Sustainability” poses exactly this question: “how best to begin the task of minimising social inequality while altering the current environmentally unsustainable use of material resources?” Frankel systematically goes through an incredible number of solutions, programmes, and movements that are wrestling with these issues. So if you have reached the point where you understand that there is no individualistic solution to climate change and programmes will be on a very broad scale from community, to nation, to the whole planet, then this is the book to get you up to speed.

What is pleasant about Frankel is that it is clear from the beginning that the root cause of the climate crisis is the carbon capitalist economic system. This frees him to start examining which “socio-economic” developments should replace it, focussing “on the deeper struggles over material resources and biodiversity that will shape future societies”, while at the same time achieving social justice. This will be determined by, and hence the title of the book, the conflict between democracy and sustainability.

The first major question raised by Frankel is if emergency powers or “normal politics” would best serve to master the necessary changes to create a sustainable society. The former implies the loss of democratic processes and civil rights. This may seem something of an irrelevant decision as currently capitalist power decides in both instances, so the outcome is equally negative. As Frankel so aptly points out: “If the pandemic is a dress rehearsal for climate emergency measures, then heaven help us.” If you look at the current world situation, the question of hegemony, military and economic for the major capitalist nations, is the primary issue. That is certainly not a productive starting point for mastering climate change.

As we have witnessed in the so-called developed nations, liberal-democracy – a system whereby every few years the citizenry choose between various factions of a neo-liberal political elite – has enabled governments to ignore climate change while preventing urgently needed effective programmes. Internationally the situation is no different, as COP26 brutally demonstrated.

On the other hand, Frankel has his doubts concerning what he calls “simplistic versions of direct democracy”. Without a doubt this is necessary and practicable at a local level, but climate change is not solely a local or national question, but will also have to be dealt with at a global level, where direct democracy becomes impossible.

According to Frankel we are witnessing a conflict between the capitalist political class that places priority on “jobs, income, and material well-being”, propagating privately financed (but with public guarantees and subventions) technical fixes for the climate, resulting in green growth. This includes cementing the already existing distribution of wealth and power. On the other side degrowth and eco-socialism that argue a green capitalist growth model is an illusion and will have little effect in turning round climate change or provide an environmentally sustainable economy. Nor will it provide for the social and material justice that is the basis of a climate neutral society. As Frankel points out, the division between technical and political problems “is artificial, as they are inseparably fused.” The question is, can one really put the two political groups in direct opposition? The one is extremely powerful, well equipped with forces of repression, propaganda machinery, and wealth. The other is at best bringing itself into formation. Frankel’s claim that “the protracted political impasse in North America, Europe, Japan, and Australia is between various pro-market conservatives and Right-wing authoritarians opposing reform-orientated businesses, centre/Left parties, and social groups”, may not accurately reflect the current balance of power and opinion.

In his book Frankel mainly looks at the second group, as he sets out to “analyse how past and present theories and movements of social change – whether anti-capitalist or post-capitalist in their green or other forms – understand and attempt to deal with the major problems in the present-day world.“ He does so with a thoroughness that is truly impressive, providing the reader with an overview of current discussions concerning potential solutions. Frankel took on a Herculean task and it is worth reading the book alone for this aspect. He manages to be relatively fair in his evaluations, citing what he sees as the strengths and weaknesses of the various approaches. Frankel does not employ some sort of faux-fairness, but is hard hitting where he sees deficits, clear where he sees positive elements, and tolerant where processes are still ongoing. He has the advantage that he has an explicit position concerning democracy, social equality, and environmental sustainability. He is constantly weighing up the relationship between the two. He seems to come down harder on some of the degrowth groups, which is a pity as it probably does more damage to his narrative than refuting the strategies of these groups.

Frankel does not stand on the sidelines carping. At the end of his book he offers what he considers the crucial elements necessary to reinstate democracy and sustainability. These range from government interventions, a universal basic services scheme (UBS), to a job guarantee, to name a few.

The opposition to extractive capitalism and the environmental destruction it perpetrates is – unfortunately – in a very early phase of development. The above quote from McKibben seems not to have fallen on fertile ground among climate scientists yet. On the one hand one should not be impatient and intolerant, on the other we do not have much time and the slow take up is frustrating. Frankel has the political nous that we need to mobilise political movements, which alone “have the power through their struggles to force changes to ecologically unsustainable government and business practices”. Without winning the support of a majority by offering a just transition this is not going to happen. We have a long way to go. This contribution by Frankel is a positive contribution to facilitating that process.

There is one caveat: chapter 1, “From Carbon Capitalism to Post-Carbon Democracies” is in my opinion mistakenly placed at the beginning of the book. It is theoretical and does not directly address the issue at hand. Maybe jump to chapter 2 and return to it later. Whatever you do, do not let it discourage you from continuing to read the book.

Democracy Versus Sustainability by Boris Frankel

Just as Angela Merkel’s reputation as the world leader of Liberal Democracy – not difficult while Donald Trump was in office – is fading following a series of fiascos, she has been outflanked by the […]

Book Review by Ben Wray Everyone interested in the politics of Europe should have this on their bookshelf. It is remarkable that it hasn’t been done before now, but Hugrée, Penissat and Spire – three […]