After two years absence from Catalan soil, exiled ex-president Carles Puigdemont addresses a massive rally in Perpignan (French Catalonia). Saturday 29th February has witnessed the biggest ever political rally in the history of what is called Northern Catalonia (or French Catalonia, capital Perpignan, Perpinyà in Catalan). Here Toni Strubell and Núria Bassa analyse the implications of this event that may seem like pre-election antics or a nationalist outcry to some, but which many observers are judging to be a major public statement in favour of human rights and a more democratic Europe in which people have the right to decide their future. 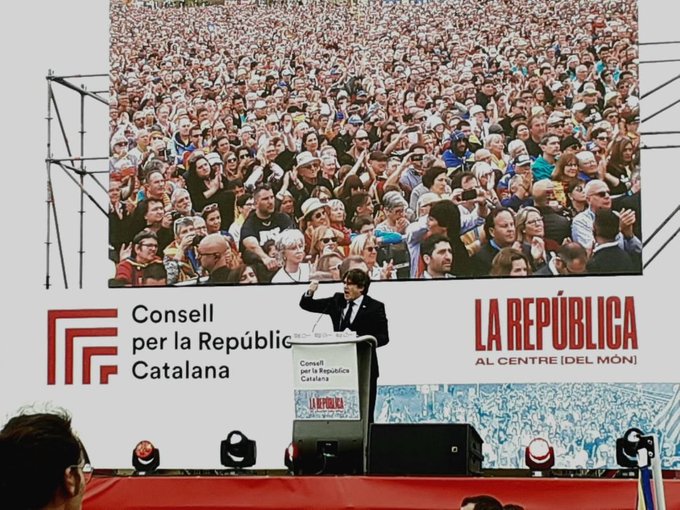 The southern French city of Perpignan (population 120.000) was literally overrun this Saturday by over two hundred thousand demonstrators (according to organizers) in a massive rally organized by the Republican Council of Catalonia. French police sealed off the motorway leading from Spain, preventing hundreds of buses reaching the city’s vast Exhibition Park.

The main purpose of the event, was to mark the return to Catalan soil – albeit under French rule since 1659- of ex-president Carles Puigdemont, accompanied by ex-ministers Toni Comín and Clara Ponsatí, two years after their move to exile in Belgium (Puigdemont and Comín) and Scotland (Ponsatí). Now all three have acquired full legal immunity due to their election to the EU Parliament, although the EU postponed their taking up office for months. This  has enabled them to visit France without fear of being arrested.

In his speech, president Puigdemont had words of gratitude for the people of northern Catalonia, where over 6000 ballot boxes were hidden in preparation for the 2017 Referendum. Not one of them was intercepted by the Spanish police when transported southwards. He also said that is was now time to finish off the independence process that was stalled in 2017 when the Catalan government was suspended. As a result of that suspension, half of its members went into exile while the other half were sentenced to up to thirteen years prison after a long and controversial trial.

Puigdemont also called for “permanent mobilisation” and “control of the territory” until independence is attained. He defined the last two years -in which Catalans have suffered relentless repression by the Spanish government – as an exercise in “holding our ground” in preparation for a more robust plan to reinstate the Catalan Republic which was briefly proclaimed on October 27th 2017. Particularly bold were the words of ex-minister Clara Ponsatí, who described the current negotiation table between the Catalan and Spanish governments as a “farce”. Likewise, ex-minister Comín – mastermind behind the Catalan Republican Council – called for the need to “stop paying taxes to the Spanish monarchy” and demanded that the EU fulfil its foundational mission of “saving democracy”.

The reason why demonstrators of all ages and denominations (a majority from the Spanish side of the frontier) responded to this call in such numbers is that it marked the full cycle of events since Puigdemont began his long haul in exile in October 2017, after the October 1st Referendum. He has now almost fully consolidated his legal status in Europe after courts in Belgium and Germany turned down orders issued by Spain’s Supreme Court calling for his extradition to Spain.

Indeed, this was the first occasion Puigdemont was able to appear before a major rally thanks to the immunity he earned when elected MEP. This was also the case with Comín and Ponsatí, but not by ex-vice President Junqueras, who, though elected MEP, is now serving a 13-year sentence for “sedition” along with eight others. Nonetheless, despite the refusal – so far – of several European courts to extradite them, a request before the European Parliament for the waiving of their immunity as MEPs does continue to pose a threat to their future status.

Perhaps the most surprising aspect about this largely independentist demonstration today was the support it has received from the Catalan authorities north of the border. Although the sense of identity and the feeble presence of the Catalan language in this region cannot be compared to the situation in southern Catalonia, the whole Catalan “Procés”, and the repression arising from the October 1st Referendum, have triggered off an unprecedented wave of sympathy in the north.

In contrast with the stiff measures demanded by the State authorities for the celebration of the event, local authorities have been most accommodating. Indeed, hundreds of mayors have signed petitions in favour of the Catalan political prisoners in the past few months. The presence of the famous “yellow ribbons” is significant in the North too. Likewise, Perpignan city council offered full support for the event from day one, with official receptions for the three MEPs at the City Hall on the Saturday morning. Puigdemont had even been guest of honour at the popular USAP team’s rugby match against Rouen, the day before, and unveiled a plaque with his name, alongside those of legendary players of the past, at the stadium. The solidarity for his cause could not have been more explicit in a land where Catalan nationalism is far from dominant.

If one thing was made clear at the rally today, however, it was that the threat to democracy in Europe is now a major issue. All speakers at the event addressed this question. As one spokesperson said after the meeting: “This was not a “nationalist” festival. It was an open appeal to the foundational values of Europe in the sense that it must be the people’s decision, and not Supreme Court rulings, that decide a nation’s will and destiny”. Now the question is whether the European Parliament’s verdict on the decision to waive Puigdemont’s immunity will remain unaffected by the rally or not.

Some feel that it may even raise feelings of apprehension in states wary of awakening national minorities –not to mention a demand for stricter democratic standards– within their own frontiers. This is certainly a brand of fear that the Spanish authorities –led by European foreign commissioner Josep Borrell– have tried to heighten at every available occasion. However, these attempts at discrediting Catalonia have often backfired, as have the extradition-orders so far, revealing Spain to be the authoritarian, corrupt, and Franco-friendly regime that many Catalans have for the last decade being attempting to rid themselves of.

The Catalonia crisis is an opportunity for Europe to re-define sovereignty, statehood and European democracy Cross-posted from DiEM25     The EU’s response to the crisis in Catalonia has been hypocritical and logically incoherent. It […]