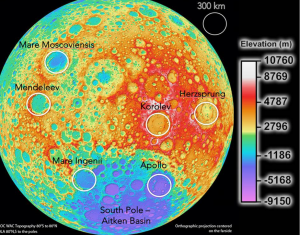 The only six sites on the farside of the Moon suitable for telescope arrays of around 200km across. NASA

When it comes to the Moon, everyone wants the same things. Not in the sense of having shared goals, but in the sense that all players target the same strategic sites – state agencies and the private sector alike. That’s because, whether you want to do science or make money, you will need things such as water and light.

Many countries and private companies have ambitious plans to explore or mine the Moon. This won’t be at some remote point in time but soon – even in this decade. As we set out in our recent paper, published in the Transactions of the Royal Society, this will spark tension on the ground unless we find ways to manage the situation imminently.

So far, much of the debate around exploring and mining the Moon has focused on tensions in space between state agencies and the private sector. But as we see it, the pressing challenge arises from limited strategic resources.

Important sites for science are also important for infrastructure construction by state agencies or commercial users. Such sites include “peaks of eternal light” (where there is almost constant sunlight, and hence access to power), and continually shaded craters at the polar regions, where there’s water ice. Each is rare, and the combination of the two – ice on the crater floor and a narrow peak of eternal light on the crater rim – is a prized target for different players. But they occur only in polar regions, rather than at the equatorial sites targeted by the Apollo programme in the 1960s and 1970s.

The recent successful landing of Chang’e 5 by China targeted a relatively smooth landing site on the lunar nearside, but it is part of a larger, phased programme due to take China’s space agency down to the lunar south pole by 2024.

India tried a more direct polar route, with its failed Chandrayaan-2 lander crashing in the same region in 2019. The Russian Roscosmos, collaborating with the European Space Agency, is also targeting the south polar region for landings late in 2021 and, in 2023, at Boguslavsky crater, as a test mission. Next, Roscosmos will aim for the Aitken Basin in the same region in 2022 on the to prospect for water in permanently shadowed areas. A number of private companies also have ambitious plans for mining the Moon for resources.

Strategic resources that aren’t in the polar regions tend to be concentrated rather than evenly distributed. Thorium and uranium, which could be used for radioactive fuel, are found together in 34 regions that are areas of less than 80km wide. Iron resulting from asteroid impacts can be found within broader territories, ranging from 30-300km across, but there are only around 20 such areas.

And then there is the poster boy of lunar resources, mined in dozens of science fiction films: Helium-3, for nuclear fusion. Seeded by the Sun in the powdery crushed rock of the lunar surface, it is present in wide areas across the Moon, but the highest concentrations are found in only about eight regions, all relatively small (less than 50km across).

These materials will be of interest both to those trying to establish infrastructure on the Moon and are later targeting Mars as well as commercial exploitation (mining), or science – for example creating telescopic arrays on the lunar far side, away from the growing noise of human communications.

How then do we deal with the problem? The Outer Space Treaty (1967) holds that “the exploration and use of outer space shall be carried out for the benefit and in the interests of all countries and shall be the province of all mankind.” States do not get to claim parts of the Moon as property, but they can still use them. Where this leaves disputes and extraction by private companies is unclear.

Proposed successors to the treatment, such as the Moon Agreement (1979), are seen as too restrictive, requiring a formal framework of laws and an ambitious international regulatory regime. The agreement has failed to gain support among key players, including the US, Russia and China. More recent steps, such as the Artemis Accords – a set of guidelines surrounding the Artemis Program for crewed exploration of the Moon – are perceived as heavily tied to the US programme.

In the worst case, this lack of framework could lead to heightened tensions on Earth. But it could also create unnecessary duplication of infrastructure, with everyone building their own stuff. That would drive up costs for individual organisations, which they would then have reasons to try to recoup in ways that could compromise opportunities for science and the legacy we leave for future generations.

Our best initial response may be modest, taking its cue from overlooked sites on Earth. Small terrestrial resource pools, such as lakes bordered by several villages, or fish stocks are often managed through approaches developed locally by the key players involved.

These suggest that a first step toward lunar-resource governance will be creating agreement among users. This should focus on the nature of the resources at stake, how their benefits should be distributed, and, crucially, the worst-case scenarios they seek to avoid. For example, actors will likely need to decide whether the peaks of eternal light should be managed as a patch of high-value real estate or as a volume of energy output to be shared. It may also be worth deciding on a case-by-case basis.

Another challenge will be fostering compliance with the governance arrangements that are devised. To that end, lunar users would be well advised to build shared installations, such as landing and supply facilities, to function as carrots that can be withheld from misbehaving actors. Such partial solutions will be difficult to add after a country or company has made irreversible investments in mission designs. Clearly, the time to devise these approaches is now.

Recent calls for economic justice, and particularly intergenerational justice, suggest a new post-crisis moral political economy could be emerging Adam Standring is a PhD student at the Universidade Nova de Lisboa, Portugal Cross-posted from the […]

Jo Michell is a Senior Lecturer in Economics at the University of the West of England, Bristol Cross-posted from Critical Macro Finance For some time now I’ve been arguing that not only does austerity have real effects but also financial implications. […]

The free market? Let us count the public money behind its vaccine. Marshall Auerback is a researcher at the Levy Economics Institute of Bard College, a fellow of Economists for Peace and Security Cross-posted from […]