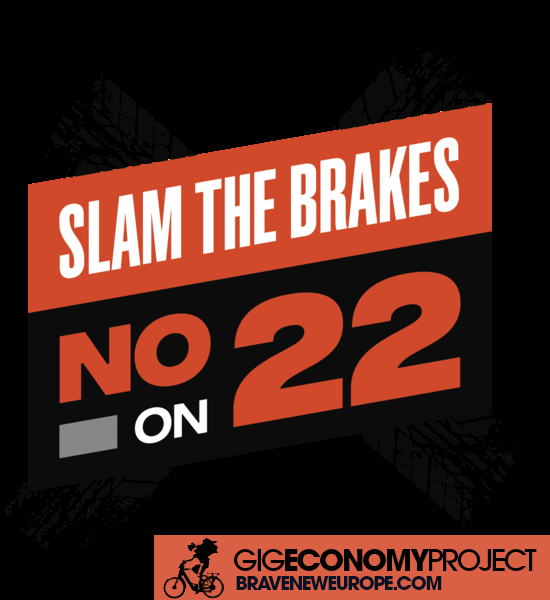 Proposition 22: when popular legislative initiatives are used to promote a campaign that seeks to deny basic labour rights

Uber, Lyft, and other companies in the platform economy have set a new record by spending $181.4 million to campaign for a ballot initiative. Proposition 22 seeks to prevent California’s AB 5 law, passed in September 2019, from recognising the employment of app drivers and delivery drivers and treating them as employees rather than independent contractors (or self-employed workers).

On 18 September, California’s Democratic Governor Gavin Newsom signed AB 5 with no exemptions for drivers and employers who interact with digital apps. In response to the passage of AB 5, Tony West, the legal director of Uber Technologies’ carpooling company, stated: “Drivers will not be automatically reclassified as employees…We will continue to respond to allegations of misclassification in arbitration and in court as necessary, as we do now.”

Who is behind the campaigns for Proposition 22?

Immediately thereafter, in October 2019, the app-based transportation platform companies introduced a legislative referendum initiative that will run parallel to the vote for the US presidency on 3 November. Brandon Castillo, spokesman for the campaign, declared at that time: “We are going to spend what it takes to win”. As of 4 September, the ‘Yes on Proposition 22‘ campaign had received $181.4 million, the largest amount of funds ever received by a legislative initiative campaign in California. Lyft, Uber and DoorDash each contributed approximately $48 million, InstaCart provided approximately $28 million and Postmates contributed approximately $10 million. The opposition ‘No on Prop 22’ campaign received $4.8 million. The International Brotherhood of Teamsters and SEIU-UHW West (labour unions) provided approximately 52 percent of the total campaign funds.

What would passage of Prop 22 mean?

AB 5, which recently became law, replaces the common law standard with the ABC standard for determining whether a worker is an employee or an independent contractor in California. Effective January 1, 2020, employing entities must classify their workers as employees unless they meet all conditions of the ABC criteria:

A) The person is free from the control and direction of the hiring entity in connection with the performance of the work.

B) The person performs work that is outside the usual course of the hiring entity’s business.

C) The person is customarily engaged in an independently established trade, occupation, or business.

Instead, the passage of Proposition 22 would define application-based drivers as workers who (a) provide delivery services on an on-demand basis through a business’s online-enable application or platform or (b) use a personal vehicle to provide prearranged transportation services for compensation via a business’s online-enabled application of platform, regardless of whether they are under the control and direction of the platform, whether the platform is their sole employer, or whether the worker is established as a contractor beyond the activity they perform for the platform.

AB 5, which became law in January of this year, included exemptions for numerous categories of work, but not for drivers and delivery drivers. On 10 August, the San Francisco Superior Court ruled that Uber and Lyft violated AB5 and misclassified their workers. Attorney General Xavier Becerra responded: “The court has intervened and agreed: Uber and Lyft must end the illegal misclassification of their drivers while our litigation continues.” Both Uber and Lyft stated threateningly that unless the court ruling was postponed, their companies could suspend operations on their applications within California. Then, on 20 August, the First District Court of Appeals in California delayed the verdict being brought into force until Superior Court Judge Schulman’s ruling.

The companies argue that Prop 22 would give drivers rights and minimum wages that they do not receive as independent contractors. However, the University of California Berkeley Labor Center has estimated that the minimum wage incorporated in the measure would actually be only $5.64 an hour, taking into account the different provisions of the initiative. The truth is that the main beneficiaries of the campaign are Uber, Lyft and the other companies in the platform economy. Uber and Lyft have publicly acknowledged that reclassifying their drivers as employees would end their business model. Uber has lost $15.7 billion and Lyft $4.2 billion in the last three years, and both say they could never be profitable if they had to reclassify drivers as employees.

That’s why these companies have made it clear that they are willing to invest tens of millions to win this historically important vote for the platform economy, even if it means making clear their lack of scruples and morals. Their survival is at stake and depends on denying thousands of workers basic labour rights, including a living wage, access to unemployment and social protections for workers, and the right to unionise. Although the battle is extremely uneven, the representatives of the drivers and delivery drivers who form the opposition to Proposition 22 are confident they can win.

The future of the transport and distribution sector based on digital applications will be decided on 3 November. We will know if money has beaten democracy once again, or if on the contrary the obligation to recognise workers’ labour rights is definitively established for these companies. This would also happen in the very homeland of these companies, where this industry is more powerful politically and economically, which could set a precedent that could extend globally. We all have a lot at stake in this vote. Show your support and solidarity to the comrades in the campaign against Proposition 22, they will need it.

This applies to the whole of the EU: When governments reduce their debt, the debts of private households and companies increase. And when companies do not invest as well, who has to go into debt? […]

Mike Wallace – Why is the EU so Interested in the Sahel Region of Sub-Saharan Africa?