Another tile in the mosaic that is climate crisis.

Valerie Vande Panne is a writing fellow and chief correspondent at Local Peace Economy, a project of the Independent Media Institute.

This article was produced by  Local Peace Economy , a project of the Independent Media Institute. 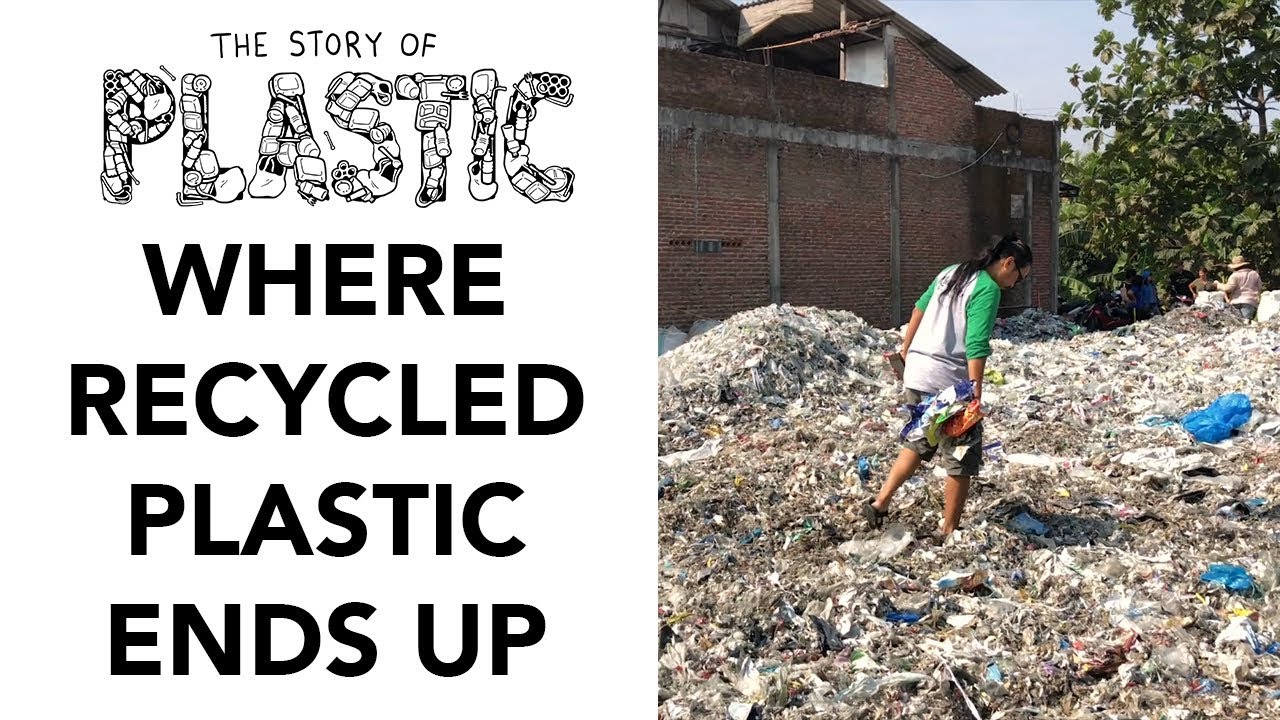 Our story begins in the 1950s. The classic promotional film shows the good American housewife, just like June Cleaver, dropping a large bowl on the kitchen floor. Miraculously, it doesn’t break. Rather, it bounces. Plastic had found its way into the American home, and the world would never be the same.

So begins “The Story of Plastic,” a new documentary from Deia Schlosberg that looks at how we got into this plastic mess, and how we get out of it.

The film—spoilers ahead!—examines plastic’s extraction, transport, refining, production, distribution, consumption, and disposal. That final step—disposal—is the one receiving much of the media attention these days, with dramatic videos of plastic beaches and sea creatures having plastic extracted from various parts of their bodies. But that’s not where we should be looking.

The point made by examining the entire life cycle of plastic is that we will never—no, never—solve the problem of plastic simply by dealing with the end waste products.

The bigger questions we would be wise to ask are who is making it, and why?

The who may or may not surprise you, and includes ExxonMobil, Chevron, Shell, Dow DuPont, Conoco Phillips and more. You get the idea.

Plastic is a waste product of oil and gas, and those companies could have paid to dispose of the waste properly—but instead turned the waste into “a whole galaxy of things to make life better on earth,” the documentary quotes, including fabrics, insecticides, cosmetics, and weed killers. Ninety-nine percent of what plastic is made of is fossil fuels.

Worse, the film makes a shocking point: “of all the plastic that has ever existed, more than half was produced in the last 15 years and 91 percent has never been recycled.”

The film uses old instructional films from the 1950s and ’60s to explain the origin—after all, plastic hasn’t been around that long. After the denial of the Great Depression, consumers were encouraged to spend, especially on plastic products, which were hailed as the greatest invention of the time—something durable that will last forever.

We’re not just talking about your grandma’s Tupperware you might begrudgingly inherit. It’s single-use plastics that are made of material that lasts forever—and are totally unrecyclable, yet exploding in production, use, and waste.

“Trash only becomes trash after it has served a useful purpose,” says Ronald Reagan in one of those black-and-white instructional films from the mid-century shown in the documentary. The propaganda was meant to shift the focus from the problem of plastic waste to littering.

That’s a problem too, the film explains: It’s easy to blame the consumer. But that blame obscures massive issues of big oil and gas corporations that are not asked to change their behavior.

You can skip the straw all you want, but at the end of the day, that won’t stop them from making ever more disposable plastic waste products that can’t be recycled.

The waste is piling up, while citizens are forced to shoulder the burden of cleanup, via their taxes.

Worse, corporations are receiving massive taxpayer subsidies to create the mess in the first place: “The cost to produce new fossil-fuel-based plastic is kept artificially low, with oil and gas subsidies: $5.2 trillion annually. This disincentivizes the use of recycled content and other alternatives,” the movie says.

While the plastics industry brags—in footage shown in the documentary—about investing $1.5 billion to find plastic waste solutions, the documentary also points out $204 billion-plus in taxpayer subsidies is going to build more than 330 new petro production facilities.

Recycling might sound like a not-so-bad solution, and there is certainly plenty of propaganda and recycle-recycle-recycle chants, yet, according to the documentary, only 2 percent of plastic is effectively recycled into something useful. Most is downcycled one time, such as into a plastic bag, and then it goes to a landfill or incinerator, where it pollutes further.

Worse, waste that was once shipped to China and forgotten is now here for us to deal with. No other country has the capacity China had, so now waste is, quite literally, piling up in people’s backyards.

The film also has graphic images of recycling plant wash water from what little is recycled dumping back into estuaries and drinking water. Then it’s melted and releases volatile organic compounds. There is no place for this stuff to go—it’s toxic to life as we know it at every turn. And of course it’s the poor suffering the most, drowning in a sea of plastic, unable to drink the groundwater, suffocating from the polluted air. It’s mostly poor marginalized women who work in the trash piles of recycling centers, separating it out for recycling.

So the taxpayer, the citizen, is paying to both create the problem and attempt to deal with the environmental catastrophe at the product’s end of life, while oil and gas companies just keep getting richer.

The documentary is peppered with “Mad Money” clips in which Jim Cramer hosts special oil and gas guests bragging about moving markets in Asia and Africa from fresh local foods to fast and packaged foods. As consumers clamor for electric vehicles and renewable energy, it’s an exciting time for plastics to hedge the oil and gas bets.

In other words: Oil and gas know people are moving toward renewables, so they are doubling down on plastics, especially in the so-called “developing world.” The climate change conversation cannot—indeed, must not—be had without plastic.

Of course, the documentary concedes, we do need some plastic, such as that used in high-tech products, particularly in emergency medicine. Life-saving devices to prosthetics, heart valves to helmets offer an argument for some degree of need for the fossil fuel product.

Yet life-saving products make up a minute amount of the plastic produced. The biggest issue is single-serving packages that are not recyclable that are aggressively marketed, especially in the “developing world” by companies including Unilever, Nestlé, and Procter and Gamble. Unfortunately, many people in the “developing world” associate access to such products as status symbols of the West. Cultures that, for thousands of years, bought loose products from bulk bags, refilling everything from glass bottles of oils to canvas bags of beans, now purchase single sachets of everything from oyster sauce to shampoo.

Somehow, in the perversity of hypercapitalism, the purchasing of more plastic is considered “developed.”

In an hour and 25 minutes, “The Story of Plastic” covers the whole chain of problems from resource extraction to incineration, the web of plastics infrastructure working to increase amount of plastic in the world, championed from the investor world to the White House to the U.S. government’s allies in the oil-rich Middle East.

It also takes a horrifying look at the battle between American citizens and Big Oil in the upper Ohio River Valley: the target of a massive new fossil fuel corridor, to export plastic. The frontlines of these battles are quite literally in our own backyards. Just look at a map of the U.S.’s oil and gas pipelines. Then google “pipeline explosion.”

The documentary hails efforts to ban plastic bags, yet it is clear there is so much more to do. And, at the end of the movie, the viewer is left with the anxiety that, indeed, the situation is urgent. We will not recycle our way out of this mess.

Prevention—turning off the oil and gas tap and all of their subsidies—isn’t radical, the film asserts. It’s the first thing we should do, to make companies accountable for the life cycle impacts of their products.

The film makes the point: We cannot keep supporting oil and gas’s bottom line forever. They need to be held accountable. Now. They need a bill for cleanup, and they need to be legislated into creating biodegradable packaging. They will not do that unless it is legislated.

To continue to create products based on petrochemicals is not a solution.

“People have a hard time picturing life without plastic, and that’s where people are duped,” notes activist and concerned citizen Elise Gerhart in the documentary.

As effective at telling the story of plastic as it is, the film might leave viewers feeling rather hopeless, drowning in the plastic despair of the reality of our situation, thanks to oil and gas. And the film doesn’t dig deep into the myriad of human health and development consequences of plastic—although it does touch on them. Plastic is crossing the blood-brain barrier. People and other living things are dying. Our great-great-great-great-great-great-grandchildren require we take action now.

Helpfully, the film does end with the actions we absolutely must take. And the viewer is left with a new, deeper understanding of the issues at hand—something we would all be wise to comprehend.

After all, as the movie notes, oil and gas can’t keep duping us into thinking we need a world filled with plastic.

Anti-government protests in Romania have made international headlines, with over 400 people left injured following clashes between protesters and police on 10 August. Dennis Deletant writes that the protests are a symptom of a growing […]