An excellent analysis of the many elements resulting in the destruction of Europe’s forests and environment. 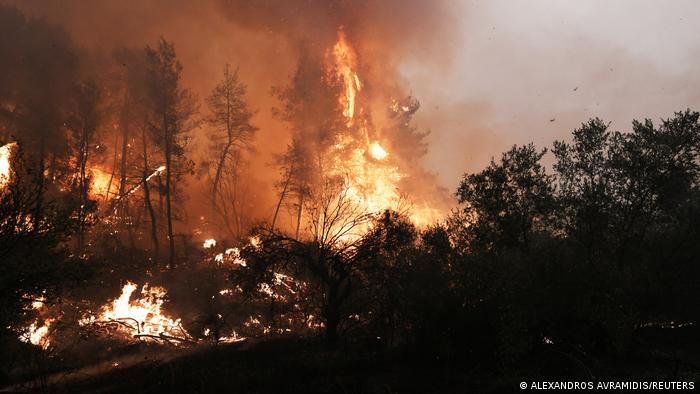 After the second world war, Greece’s countryside experienced two debilitating human surges – an exodus of villagers, then a most peculiar human invasion of its fringes. These two surges, aided by a weak state and abetted by the climate crisis, have turned the low-level drama of naturally redemptive forest fires into this summer’s heart-wrenching catastrophe.

After heatwaves of unprecedented longevity, wildfires across the summer months have so far destroyed more than 100,000 hectares (250,000 acres) of ancient pine forests. They have blackened swathes of Attica, scorched parts of ancient Olympia and obliterated north Evia’s magnificent forests – whose rural communities lost their homes, not to mention their livelihoods and landscapes.

To these petty-bourgeois dwellings, which by the 1980s were strewn all over Attica, the mid-1990s added middle-class suburbia. Villas and shopping malls gradually invaded inland wooded areas bordering Athens, at a speed that reflected the economic growth fuelled with money borrowed from EU banks or provided via EU structural funding.

It is as if we were looking for trouble. Fire is a natural ally of Mediterranean pine forests. It helps clear the ground of old trees and allows young ones to prosper. By helping themselves to the wood daily and by employing tactical burning every spring, villagers once prevented these fires from running amok. Alas, not only did circumstances force the villagers to abandon the forests but, when they and their descendants returned as atomised urbanites to build their summer homes inside the untended forests, they did so bearing none of the traditional communal knowledge or practices.

Europe’s famous north-south economic divide has a counterpart in Greece’s forests. In countries such as Sweden or Germany, forests were intensely commodified. While this spelled the demise of ancient forests, and their replacement with arid plantations, farmland or grazing pastures, at least the countryside was not abandoned the way Greece’s was. In a sense, the sorry state of Greece’s countryside, the swift and unregulated urbanisation, and our feeble and corrupt state are all reflections of the country’s atrophic capitalism.

Greek governments had been aware of the unsustainability of our model of land use since wildfires began to take revenge on us in the 1970s. Deep down, they knew: we had, collectively, violated nature, and now nature was exacting its long and drawn-out revenge. Convinced, however, that their re-election chances were doomed if they dared tell voters that maybe they should give up on the dream of that cabin in the forest, abandon the plan to suburbanise pine forests, governments chose the easy path: they blamed warm winds, fiendish arsonists, bad luck, even the odd Turkish saboteur.

Collective responsibility was the first casualty of every inferno. On 23 July 2018, at a seaside settlement north of Athens known as Mati, a demonic fireball incinerated 103 people within minutes – including a friend. The cause was obvious to anyone willing to take a disinterested look at the way the dense settlement had been inserted into an ageing pine forest, with narrow lanes offering no realistic chance of escape from the inevitable fire.

Alas, neither the government nor the opposition dared to admit the obvious: that we should never have allowed that settlement to be built. Instead, they yelled at each other endlessly, playing a blame game that disrespected the victims, society, nature.

Even when governments tried their hand at modernising their practices, they made things worse. In 1998, in a bid to professionalise firefighting, the bush firefighting unit (hitherto run by the forestry commission) was disbanded and folded into the urban fire brigade. The resulting economies of scale came at a cost: the termination of the large-scale forest clearing effort that the bush firefighting unit used to undertake every winter and spring.

Following an urban bureaucracy’s natural instinct to favour hi-tech solutions, and to look down upon traditional practices, the unified fire brigade effectively withdrew from the forests and concentrated instead on a strategy of setting up firewalls around built-up areas, while bombarding forest fires from the air – using aircraft that more often than not cannot fly due to adverse conditions.

Then, in early 2010, came the Greek state’s undeclared bankruptcy. Soon, dozens of EU and IMF officials – the infamous troika – would arrive in Athens to impose the world’s harshest austerity programme. Every budget was ruthlessly slashed, including those aimed at citizen and nature protection. Thousands of doctors, nurses and, yes, firefighters were fired. In 2011, the fire brigade’s overall budget was cut by 20%.

In the spring of 2015, a senior fire brigade officer told me that at least another 5,000 firefighters were needed to offer basic protection in the following summer. As Greece’s finance minister at the time, I drew up plans to exact savings from other parts of the budget to rehire a modest number of firefighters and doctors (2,000 altogether). Upon hearing this, the troika immediately condemned me for “backtracking” and issued a clear warning that, if I insisted, the negotiations at the Eurogroup would be terminated – shorthand for announcing the closure of Greece’s banks.

Since then the only real change has been the steady rise of temperatures, courtesy of accelerating climate breakdown. This summer’s firestorm was utterly foreseeable – as was the inability of our state to respond effectively. And the EU? Did it send dozens of staff to micromanage events on the ground, like it had done when imposing austerity? Unlike the assistance Greece received from individual European governments, including post-Brexit Britain’s, the EU institutions were conspicuous by their absence.

The terrifying question is: what next? The spectre of a new threat to Greece’s forests is hanging over the land. It is the current rightwing government’s eagerness to subcontract reforestation to private multinational businesses. In search of a quick euro, they peddle fast-growing, genetically modified trees that have no place in the Mediterranean and are inimical to our flora, fauna and traditional landscape. Unlike the awful impact of the state’s bankruptcy on our people, which one day we hope to reverse, this assault on our native forests will be irreversible.

Dean Baker – Why Pay Less? The US Strategy for Vaccinating the World

Why open source medicines offer so much to society – but less to pharmaceutical corporations. Dean Baker is a Senior Economist at the Center for Economic and Policy Research (CEPR) Cross-posted from the CEPR Blog […]

Simon Bramwell – The shaping of History: THE PEOPLE VERSUS SHELL

On 22 April, XR co-founder Simon Bramwell and six other rebels appeared at the Southwark Crown Court, charged with causing 25K worth of criminal damage to Shell’s London headquarters.  In a historic ruling, six of […]

Spanish companies are clocking up profits and dividends at the expense of their workforce, especially young Spaniards, as well as to the detriment of society. No wonder young graduates are going for less glamourous jobs, […]