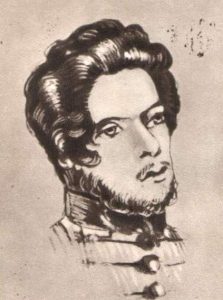 Karl Marx as a student

Michael Heinrich’s projected biography of Marx that is supposed to consist of four volumes is an extraordinarily ambitious undertaking. Only the first volume “Karl Marx and the Birth of Modern Society” has been published so far. It covers the years before Marx’s birth (because it deals with his parents) and goes up to his doctoral dissertation done in 1841, when he was 23.

The biography is extraordinarily ambitious for three reasons.

First, Heinrich’s work is so detailed that it seems that almost nothing that Marx or his correspondents have written had escaped his attention. He is, of course, helped in this by the enormous collections of MEGA and MEW that were publishing for years everything from Marx’s youthful poems to his enormous reading notes. (As Heinrich writes, Marx’s surviving reading notes, that he started making when he was around 17, comprise 40 volumes!).

Second, Heinrich seems to have read closely all the previous biographies of Marx and is often very severe in his judgment, especially of the two recent ones by Gareth Steedman Jones (“Greatness and Illusion”) and Jonathan Sterber (“A Nineteenth Century Life”). As Heinrich points out, the problem is that many biographers rely on what earlier biographers have written (Franz Mehring’s Marx biography written in 1918 was especially influential)  and they simply copy things without checking. For Heinrich, this would not do—so in a number of cases he takes earlier biographers to task for being compilers of the copy-and-paste type rather than researchers.

Finally, and most impressively, Heinrich’s objective is to explain Marx’s lifelong intellectual journey This means that for a person with such vast interests and voracious intellectual appetite like Marx, Heinrich needs to provide intellectual history of “everything” from German Romantic poetry to Prussian state ideology to philosophy of religion to post-Aristotelian Greek philosophy (and this in book 1 only). One shudders to think of the enormity of the task in the next three volumes. Thus, the book begins increasingly to look more like the intellectual and political history of the 19th century Western Europe and Prussia than a biography of Marx.

But this is needed to understand the evolution of Marx’s thinking. While these intellectual movements are in most biographies dismissed in a couple of paragraphs, or at best in a page or two, in Heinrich they are of essays-like lengths. For example, parts of Hegel’s philosophy, the split into the “Young Hegelians” and “Old Hegelians’ (the traditional split of whose accuracy Heinrich is not fully convinced), the philosophy of religion derived from Hegel and the various  theological battles within Prussian Protestantism and between Protestantism and Catholicism are discussed at some 40-50 pages. Add to that the political implications of these seemingly abstruse and turgid metaphysical arguments, and we are in the thicket of the intellectual-political history of Prussia after the 1830 French Revolution and the dynastic succession in Prussia herself. Karl Marx hardly makes an appearance in these pages—but the objective is clear: we cannot understand Marx’s writings without understanding the discussions he was engaged in at the time.

Depending on one’s intellectual taste, some of these ideological currents may be of more or less interest: is one more interested in German poetic romanticism, folk tales, brothers Grimm, Heine, or in Hegel’s Phenomenology of Spirit, “natural theology”, and the various interpretations of the Old and New Testament?  Other than giving to the reader the idea of the breadth of Heinrich’s coverage I will not discuss any of these intellectual movements simply because my knowledge of them is inadequate.

So I would focus on two things which have to do with Marx’s life and intellectual evolution.

Marx’s father (Heinrich) plays an important and admirable role. His treatment of precocious and somewhat egotistic (as the father mentions twice) Karl as an equal, with whom at an early age he is engaged in many intellectual discussions, is exemplary. There are very few as supportive and generous fathers. Equally impressive are father’s leniency and patience (despite a couple of small conflicts) toward Karl during his studies in Bonn and Berlin, when Karl at times wrote home infrequently, took only the classes that he was interested in (“If you have leisure…I shall be glad if you could draw up for me a concise plan of positive legal studies that you will have gone through the year”; p. 201), and kept on spending significant amounts of money. At one point, Karl’s expenses amounted to ½ of Heinrich Marx’s not inconsiderable lawyerly income (p. 216). (Heinrich Marx was one of Trier’s top lawyers).

The situation for Heinrich Marx became even more fraught because Karl was engaged, at first secretly and then openly, to the daughter (Jenny von Westphalen) of a close family friend.  She was four years older (big age difference in those days), her commitment to Karl was serious (she broke off the previous engagement), and she placed her full trust into a 21-year old who went to study in a big city, while she stayed at her parental home (women were not admitted to universities).

Not surprisingly somewhat fearful Heinrich Marx writes to his son: “She is devoted to you body and soul and you must never forget it; at her age she is making a sacrifice that ordinary girls would certainly not be capable of” (p. 198). Obviously had Karl changed his mind, the likelihood of Jenny, despite her good family connection, of finding another suitable husband –whom in principle she also needed to love—at the age of 27 would have been severely diminished.

There is only one point where I thought one could have a slightly different interpretation that Heinrich. In explaining Marx’s evolution from his Abitur (17 years old) to poetry-writing to his “conversion” to philosophy, Heinrich, unlike other authors, draws a straight line. While other biographers think that Marx abandoned poetry simply because he realized that he was not a good poet, Heinrich has an alternative explanation.

In his Abitur essay Marx sees the ideal future occupation for a young man (like himself) as contributing to the happiness of others: “Man’s nature is so constituted that he can attain his perfection only by working for the perfection, for the good, of his fellow-men. If he works only for himself he may perhaps become a famous man of learning, a great sage, an excellent poet, but he can never be a perfect, truly great man” (p. 107). Heinrich thinks that Marx original interest in poetry was propelled by the same desire: making the world better through artistic creation. But as he realized that this falls short of transforming people’s lives, he gradually transited towards the more serious field of philosophy.

I wonder however if Heinrich, despite Marx’s undoubtful brilliance, overestimates consistency of thinking in a 17- or 18-year old. It could be that Karl picked up poetry for the same reason that many young people at that age have an urge to express themselves in romantic terms, especially if they fall in love and feel the need to send tokens of their admiration  to their beloved (as Marx did by  repeatedly sending his poems to Jenny). It may not have had much to do with betterment of humankind.

Around the same time, in his first two years of Berlin studies, Marx was influenced  by a famous legal scholar Eduard Gans who as a liberal was the main opponent of the ultra-conservative legalist Friedrich Carl von Savigny. A couple of sentences from Gans, contrasting historical roles of the haves and the have-nots, read like excerpts from “The Communist Manifesto”. Heinrich accepts Gans role in Marx’s evolution, but dismisses its “lasting influence” (p. 172). However, it is noticeable, although Heinrich does not mention it, that among the list of classes taken by Marx in Berlin, apparently the only professor whose classes he took twice (Criminal Law and Prussian Law) is Gans. In addition, these were the only classes where his grade  was “exceptionally diligent” (pp. 170; 211).

One is looking forward to the other three volumes. If they are like the first, it will be an incredible “tour de force” since Heinrich will have to cover everything  from philosophy to political science to political economy to agricultural techniques to military strategy to anarchism—and indeed the political history of the 19th century Europe and the world. A gigantic undertaking that only very few people in the world can bring to fruition.

Marx was one of them. But he failed to write his autobiography.

Craig Murray – Donziger: A Tale For Our Times

We have been very sparing in our coverage of Brexit, as we felt most articles were based upon speculation, not facts. In the past week more tangible information has become available, so we thought we […]

Claude Poissenot – Why France’s ‘gilets jaunes’ protesters are so angry

Claude Poissenot, Université de Lorraine France’s “gilets jaunes” protests of December 1 were marked not only by their anger and violence, but also by the variety of those taking part. The violence of the protests […]