A brilliant comparison, especially as Norway is held up as a paradigm of reducing CO2. It even has a $1.32 trillion wealth fund with which to build a carbon free economy. 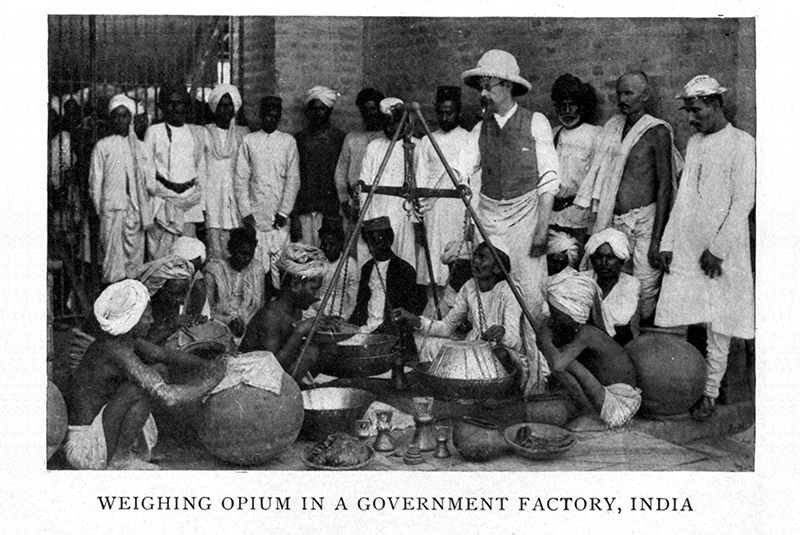 In the eighteenth century, English-led East India Company gradually managed to control most of India. Its rule was a disaster for India, but made many directors and stockholders of the company exceedingly rich. The wealth enabled many of them to play important roles in English political, intellectual, and business life. As Adam Smith, an uncompromising critic of the Company, wrote: “The government of an exclusive company of merchants is, perhaps, the worst of all governments for any country whatever.” Faced with so many depredations, the British government finally took away the monopoly of Indian trade from the company in the midst of the Napoleonic wars.

This led the Company to redouble its efforts elsewhere: to trade with China. The problem with China was that nothing that company could sell to the Chinese was of interest to them. There was a lot that the company wanted to buy from China (porcelain, tea) but nothing to sell. Until it came to the idea of using opium produced in Bengal to sell to China. Despite the ban that the Chinese government had put on opium imports there was domestic demand for it. To overcome the ban, and in order to sell a widely addictive substance that for ethical reasons it could not sell anywhere else, the company decided to engage in a war to open Chinese ports. This was the origin of the infamous Opium War whose final outcome in 1842 was the opening of five Chinese “treaty ports”, cession of Hong Kong. and extraterritoriality for foreigners living in China. The “century of humiliations” had begun. And the company could finally sell to far-away foreigners something of whose consumption they themselves disproved.

Norwegian government is one of the most active government in highlighting the threat of the climate change. It tries to replace almost entirely country’s use of gas-fueled cars by electric cars. It is proud of the decrease of the footprint of its consumption. It funds international activities that are supposed to limit and reverse deforestation in the world. Yet at the same time, for half century, Norway has been one of significant world producers, and even more so important exporters, of oil and gas (for gas, the third largest in the world), and some 50% of the value its goods exports consist of gas and oil. Moreover, the government has recently decided to expand exploration and production of gas and oil in one of the areas that the very same government acknowledges are most sensitive to climate change—the Arctic Circle.

Norway thus increases the production and sales of a commodity that herself deems noxious, and sells it, like the East India Company did with opium, to fairway foreigners while staying domestically clean. “Money has no smell”.

Norway’s behaviour is not only surprising because it is hypocritical: the virtue-signaling stands in a manifest contrast with what the government does. It is even more striking when looked at in the context where many climate-change activists in their struggle to reduce emissions try to convince poorer and middle-income countries of benefits of lower production and consumption.

The question can then be asked: if they are so clearly unable to convince of the benefits of climate control the population and the government of the richest country in the world, what type of arguments do they plan to use to convince Mexico, Gabon, Nigeria, Russia to reduce production of gas and oil? These are countries whose incomes are a fraction of Norway’s: for example, the median-income person in Nigeria has one-twentieth (not a typo: 1/20) of the real income of the median-income person in Norway.

I could fully understand that Mexico or Nigeria refuse to reduce production of gas and oil because without it, there would be significant impoverishment of their population. But there will no impoverishment of Norwegian population—by any reasonable metric. Norway, a country with a very high income (GDP per capita of 66,000 international dollars, 20% higher than that of the United States) and with this income fairly equally distributed amongst its citizens (Gini coefficient of 26), should be able to give up the production of its “opium-equivalent”. But there is apparently no political support for such a measure, as the current government in its new decision about a more extensive exploration and production seems fully assured of majority support.

There is here a very important lesson for all climate change activists. They need, as I have many times insisted, to think much more seriously about the trade off between economic growth and climate change control. While in their models, the advantages of controlling climate change are incontrovertible, when they come to policies that need to be implemented, from taxes on airplane fuel, to taxes on petrol (which provoked the Gilets Jaunes movement in France), they face popular resistance. The popular resistance is due to the unwillingness of almost anyone in the world to accept lower income. Climate change activists might talk in their conferences about people “thriving” on lower incomes, but when offered that alternative, even the citizens of the richest country in the world decline it.

If we want to really confront –as opposed to just talking—climate change we should first, be rid of extreme hypocrisy (as this one), and second, design policies that would be acceptable to the population. And we should start with rich countries, not only because historically they have been the most important contributors to climate change (through historical accumulation of emissions) but because they should be able to bear costs more easily than the rest.

Kubko/Shutterstock.com Matthew Adams, University of Brighton Following the 2015 Paris Agreement to hold the global increase in climate to below 2℃ above pre-industrial levels, the UN’s Intergovernmental Panel on Climate Change (IPCC) was asked […]

This month, the energy consulting firm Wood MacKenzie gave an online presentation that basically debunked the whole business model of the shale industry. Justin Mikulka is a freelance writer, audio and video producer living in Trumansburg, NY Cross-posted from […]