What occurs when government breaks down?

You can read the first part of this book review here 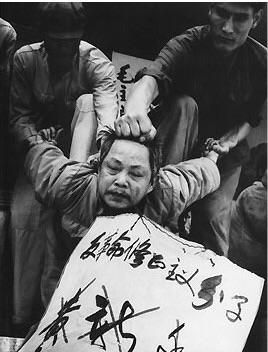 Yang Jisheng’s “The world turned upside down” (whose methodological approach I reviewed here) is an extraordinary rich book. The ten-year period that it covers, from 1966 to 1976, was an amazingly turbulent period in Chinese history, with implications that do not carry over only for China to the present, but that have response (and precedents) in the rest of the world.

When it comes to the narrative alone, Yang’s book is fascinating. It is impossible to describe in a short review the chaos wrought by the Cultural Revolution that Yang studies not only chronologically, but in various parts of China. A part of the challenge of describing what was happening lies with the decentralized nature of anarchy and violence that engulfed the whole country. The reader often thinks of analogies with Stalin’s Great Terror, but the differences are perhaps even more telling. While the Great Terror was a centralized terrorization of certain groups and individuals, often specifically selected by Stalin, the Cultural Revolution was a decentralized permission to settle accounts given to everybody. Thus the nature of conflict varied from one locality to another, from one town to another.

The beginnings in the Summer of 1966 were limited to high-school and university students and were almost entirely Beijing-based. It was a permission, even encouragement, given to high-school kids to take over schools and universities, berate and humiliate teachers, and do as they please. If one were to do the same thing anywhere in the world, the results would have been the same: the kids would enjoy “turning the world upside down”, as the young Nero and Commodus did. At that early stage, the attacks were mostly directed against “the five black categories”. Offspring of high government and party officials (all studying at various Beijing universities) were often in the lead, using a bizarre “blood lineage” theory that, they argued, gave them the right to rule in virtue of being of the right class (and genetic) background.

The escalation was not only geographical, as the student movement widened to cover all of China, but “sectoral” as well. Mao first authorized the movement to spread among workers, and encouraged the alliance of revolutionary students and workers (a thing which, by the way, eluded the “revolution” in France only a year later), and finally – despite the strong opposition from the military – allowed the “support-the-left” movement to sow havoc in the Army as well. The military was asked to supply weapons to the left factions, or to ignore such factions’ stealing or simply taking the weapons themselves.

The country thus within some twelve months descending into a full chaos led by a bewildering number of factions with quasi identical names (e.g. “The Red Alliance” against “The Revolutionary Alliance” in Daoxian, p. 351) which all fought in order to further Mao Zedong thought. “Thousands of large-scale armed conflicts throughout the country resulted in deaths of more than a hundred thousand people” (p. 228). At the risk of simplification, it could be said that the factions can be divided into two groups, and Yang uses the two groupings consistently through the book: rebel and conservative factions.

The rebel faction was originally started by the children of the nomenklatura but then gradually was taken over by malcontents, low-paid workers, and those with grievances, or just a taste for violence, that is, those who had most to gain from anarchy as well as by those who ideologically believed in “the permanent revolution”. As Yang explains,

“A genuine rebellion requires taking political risk, but the old Red Guards [the original rebel faction] with their privileged backing, had little to fear from attacking teachers…When the situation of the Cultural Revolution changed and the parents of the Red Guards were attacked as capitalist roaders, the old Red Guards openly protected the cadres and attacked the rebel factions, and in that way become a conservative faction in name as well as practice, however they might disavow the label” (p. 151).

Was the rebel faction a people’s faction? The negotiations in Shanghai between the rebel faction of the workers and the city government eerily resemble those between Solidarity and Polish government, some 13 years later. So, workers in Shanghai and workers in Gdansk united? The difference was that in Shanghai workers had the support from the top, namely from Mao, who in 1967 “allowed China’s people to enjoy the freedom of association enshrined in the constitution, [and] mass organizations proliferated” (p. 149). So, revolution of freedom, or “revolution because of lack of freedom”? Moreover “The Sixteen Articles [the CPC rules on handling the Cultural Revolution] prevented party committees from attacking the rebel masses, while giving the masses the freedom and confidence to rebel, and the higher the rank of the leader denounced, the more revolutionary the critic was considered to be” (p. 154).

Against the rebel factions were arrayed the conservative factions, supported by most of the top military (old marshals whom Mao alternatively cajoled and berated), the government apparatus, health and education workers, factory managers, and all those who wanted to impose some kind of order over a society that was looking more Hobbesian by the day.

Yang’s unstated, but clear, objective in the book is to overturn the current official narrative. The officially-sanctioned view of the Cultural Revolution is that most of the crimes were committed by the “rebel faction” and that eventually the country was saved thanks to those who managed to ensure the return to normal life. But, Yang writes, “mainstream public opinion has blamed all the evils of the Cultural Revolution on the rebel faction, but the vast majority of victims died while the rebel faction was suppressed under the new order of military and administrative bureaucratic control” (p. 230). In that revision of official history neither Liu Shaoqi, who initially, whether for opportunistic or genuine reasons, supported the Cultural Revolution, nor (especially) Zhou Enlai are spared at times scathing comments. (Deng Xiaoping hardly appears in the story.)

The “new order”—which basically means a major turning point in the Cultural Revolution—occurred when Mao himself personally witnessed the chaos of pitched armed battles in Wuhan in August 1967, and had to flee the city. It was followed by investigations and suppression of the rebel faction, linked to the May 16 [1967] incident when the rebel faction directly accused Zhou Enlai.

The three central chapters of the book (chapters 16-18) describe in gory detail the enormity of the massacres. “The cleansing of party ranks” gives a review of local campaigns against various class enemies (who in many cases were the same people who previously themselves conducted campaigns of cleansing of the enemies); the next chapter describes the cases of famous victims, mostly scientists and old party members (in a way strongly reminiscent of Roy Medvedev’s “Let History Judge”) and the most gut-wrenching chapter describes the appalling massacre conducted at the local level by whatever faction managed to do it against neighbours. The randomness and brutality of killings (including ritualistic murders and cannibalism) is both shocking, and not entirely unexpected for those who know, from history, that humans freed from any constraint and given a license to kill, will often do so. We are not there in the presence of a systematic targeted killing, as performed by the Nazis and Stalin’s Great Terror, but of decentralized massacres common to Civil Wars.

It is a book that anyone interested in Chinese or communist history should read. But it is a book whose main messages are about the role of government, freedom from constraint, and human nature.

The problem with understanding the effects of globalisation on inequality is the information being used and how it is interperted. Branko Milanović gives some insight into trends and how they are and can be explained. […]

John Weeks – Towards a definition of populism