The IMF, which until the crisis of 2008 was the temple of orthodoxy, has begun a revision of those principles; at least in theory, because often the prescriptions have not moved away from the traditional dogma. 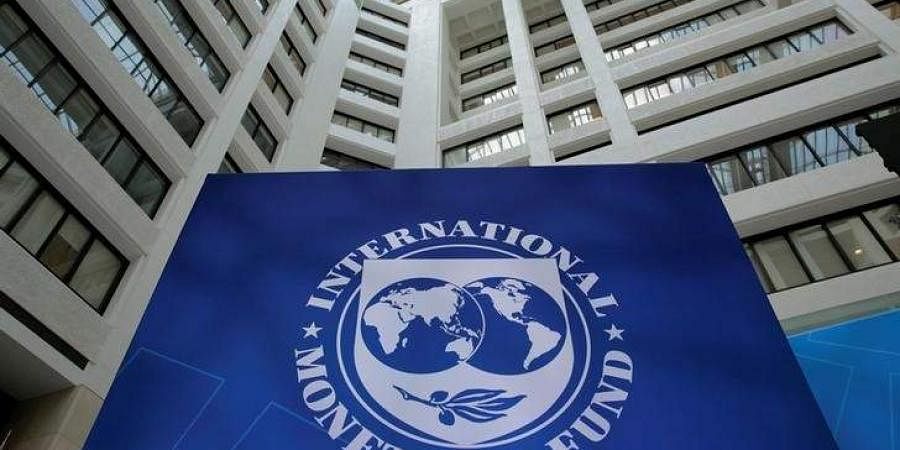 Under the hard blows of the real economy, all the cornerstones of the neo-liberal economic theories that have dominated since the end of the 1970s are falling one by one. The reports of the international institutions, which until yesterday were relentlessly repeating the prescriptions of those theories, have been radically changing tones and recipes for some time now.

The International Monetary Fund (IMF), for example, which until the crisis of 2008 was the temple of orthodoxy and implacably imposed the dictates of the “Washington consensus” on the unfortunate countries that asked for its help, under the direction of Dominique Strauss-Kahn and then thanks above all to the former chief economist Olivier Blanchard (with Christine Lagarde as director), has begun a revision of those principles; at least in theory, because often the prescriptions have not moved away from the traditional dogma.

In the newly released “Fiscal Monitor”, the IMF takes other important steps in the demolition of the dominant doctrine of the past 40 years. The most relevant from this point of view is perhaps the one that reevaluates public investments, which not only do not displace private investments – contrary to what has been claimed so far – but rather stimulates them: an intervention by the state of 1% of GDP would increase private investments by as much as 10%. Beyond the small numbers (always questionable and susceptible to strong changes depending on the situation) what counts is the principle, after decades in which public intervention has been demonised. Of course, Keynes said these things almost a century ago, but that seemed to irritate no one.

Not only that. The pandemic has shown that spending on health is not a luxury, but something indispensable, because it is necessary to be able to deal with events of this kind that – as we have seen – can cripple the economy. Not only because of the lockdowns (which are necessary, says the IMF), but also because, even when there is no complete shutdown, the fear of getting sick hinders a whole series of activities that are done in normal times. Nor is the environment missing as a priority. Its protection must be transformed into an opportunity for development, with incentives for “clean” energy and heavy taxes on those who pollute, whicg revenue must be used for the benefit of those damaged by the transformation. It does not seem to be the same International Monetary Fund that only a short time ago was among the executioners of the Greek people. Of course, now we will have to see if and how it will apply these fine principles to those who ask for its help. For the moment it this seems improbable. A study quoted by Bill Mitchell reports that in 76 out of 91 loans that the Fund has granted to countries in difficulty because of the pandemic, very harsh conditionality has been imposed: cuts in health spending, assistance to the unemployed, services, and civil servant salaries.

But proposing a strategy for overcoming the crisis and development radically different from the one that has guided the world since the 1980s is the UNCTAD Report. And its tone is of great urgency. “The life of future generations – said the general secretary, Kenyan Mukhisa Kituyi – and even of the planet itself, depends on the choices we will all make in the coming months”. UNCTAD, as is well known, is the UN body that deals with trade, development and finance and therefore has a global vision.

Many developed nations have responded to the previous crises with austerity policies: we must not repeat this dramatic mistake, the report reiterates, which has caused a “lost decade”. But this is not inevitable, it is a question of political choices. And it supports the statement with an econometrics exercise that compares a scenario in which fiscal stimuli to the economy are modest, 1.2%, with another scenario in which spending is instead 3.1%. In ten years the average growth in the second case would be almost double that of the first (3.8% instead of 2); thanks to this growth the debt/GDP ratio would fall, despite the higher expenditure. Fiscal policy should also be accompanied by an industrial policy that directs investment to clean energy, environmental protection, a more sustainable transport system, and social protection systems. 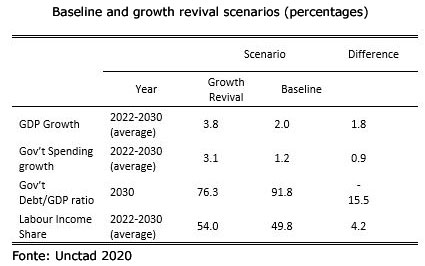 The plan also foresees that wages should increase more than GDP, 54% instead of 49.8 in the baseline scenario. This would only be a “compensation”: with neo-liberal policies, the share of wages has fallen everywhere, even by ten percentage points. 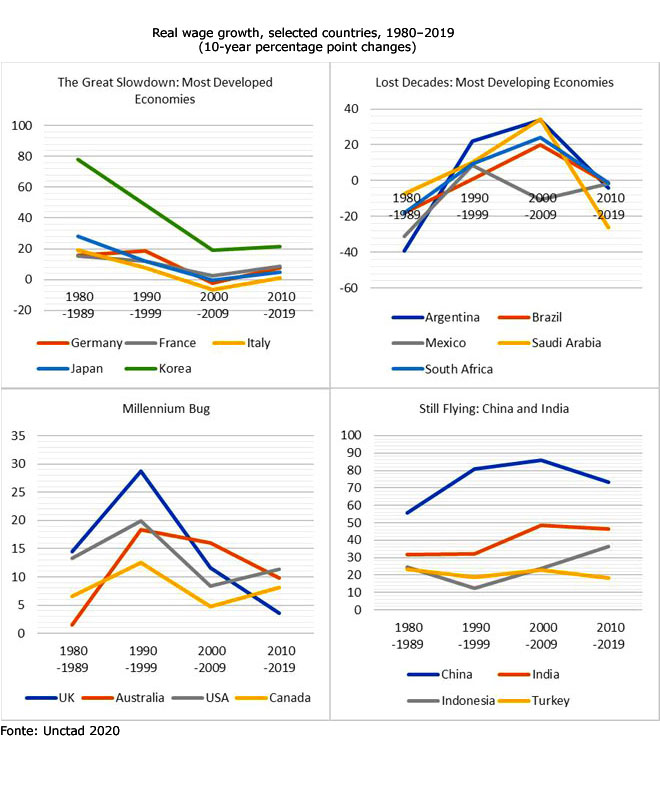 The Report places great emphasis on the intolerable inequalities generated by the policies of the past decades, which are not only unfair, but also negatively affect the functioning of the economy. And the need for the recovery plan to be agreed and managed globally, not least to address another serious problem, that of debt stifled developing countries, the costs of which not only absorb resources, leaving too few for development policies, but particularly at this stage prevent sufficient resources from being devoted to the fight against the pandemic. At the moment, the Paris Club (a group of 22 wealthy nations that are renegotiating the debts of developing countries) has suspended payments until next December, but only to a few countries and for an amount – at the moment – of 14 billion dollars. Suffice it to say that by next year, high-income developing countries will have to face plans to repay foreign public debt of between 2,000 and 2,300 billion dollars and medium- and low-income countries of between 600 and 1,000 billion dollars.

Meanwhile, the Report points out, listed companies included in the Standard & Poor’s Index alone have spent $1 trillion a year buying their own shares instead of investing it in productive investments. The world of finance is another element highlighted in the Report: what is happening makes it clear that large corporations have too much power to influence politics and get the rules they want approved. In fact, recalls the Report, after the last crisis caused by a finance without rules, nothing has changed.

UNCTAD makes some operational proposals, which would need multilateral approval.

– Financial support to strengthen the emergency health response to COVID-19 in developing countries through a Marshall Plan for health recovery financed through increased development assistance commitments, international fiscal reform, and enhanced multilateral financing mechanisms, on a scale that builds resilience and stimulates recovery.

– An International Public Credit Rating Agency to provide objective assessments based on experience of the creditworthiness of sovereign countries and corporations, including developing countries, and to promote global public well being. This would also help to promote competition in a highly concentrated private market.

Until recently, those who supported ideas such as those mentioned here were inevitably marginalised, both in the political and academic spheres. It has taken two historical crises for even international institutions to begin to take note of the glaring failures of the dominant theories. The unprecedented emergency of the pandemic led governments to take decisions that were completely at odds with what had been preached until now, but many voices from the bastions of power rushed to specify that these were provisional measures due to the state of emergency, suggesting that, once the crisis was over, there would be a return to “conventional wisdom”. Wrong ideas die hard when they serve to justify the privileges of the ruling classes.

Sam Pizzigati – Tax the Rich? We Did That Once

In the early 1960s, America’s richest faced a 91 percent tax rate on income in the top tax bracket. The current top-bracket rate: 37 percent. Sam Pizzigati writes on inequality for the Institute for Policy […]

Meanwhile, the EU’s institutional barriers to long-term reform remain formidable. Marshall Auerback is a market analyst and commentator This article was produced by Economy for All, a project of the Independent Media Institute Until March […]