The UN Climate Change Conference in Bonn began on 6 November. It is interesting to note that Germany’s reputation as an environmental leader is based on anything but facts. Protestors decided to highlight this hypocrisy. Also the conference itself is being called into question as it becomes a stage for those responsible for climate warming.

Negotiations are now underway at COP23, the 23rd round of UN climate talks in Bonn, Germany. But the day before countries sat down to the arduous task of tackling climate change, 3000 people were taking matters into their own hands, occupying a coal mine only a few miles away from the conference centre. However, despite the relatively small physical distance, the two groups may as well be worlds apart. While the protestors call for an end to the age of fossil fuels and want to break industry’s grip over the negotiating process, those in charge want to keep that message well away from the talks.

At the UN climate talks, the EU is accustomed (by contrast to the US) to the status of ‘climate leader’. Many point to the German transition to renewable energy, or ‘energiewende’, as a key example. However, the talks are taking place in the heart of German coal-land, and just a few miles down the road is Europe’s biggest open-pit coal mine, also the continents single biggest source of CO2. Since the energiewende, Germany’s consumption and export of brown lignite coal has increased. That’s why thousands of people took the decision to break the law and enter the mine together in an act of civil disobedience to call for an immediate phase-out from coal. If Germany and the EU were not going to stand up to the coal industry and protect the climate, then they would. 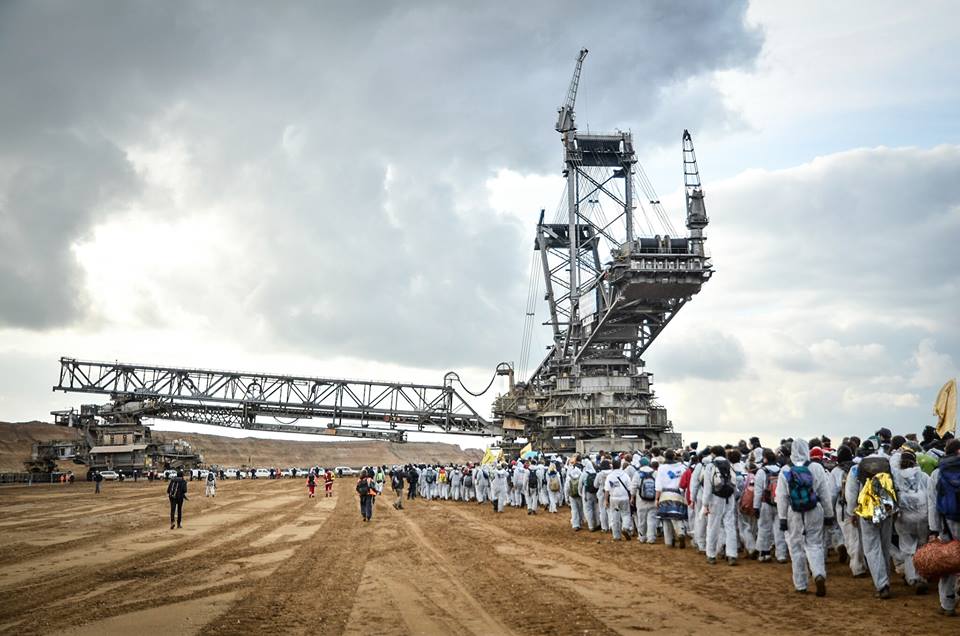 As well as those who entered the mine, over a thousand people stood on the edge in solidarity, led by the Pacific Climate Warriors whose island homes in the South Pacific would be underwater if fossil fuel use continued.

You can watch a video of the Pacific Climate Warriors and activists from around the world using their bodies, their culture and their spirits to demand an end to the era of fossil fuels near Bonn ahead of COP23 here. [https://www.facebook.com/350.org/videos/10155987740257708/]

The Pacific Climate Warriors recently launched their Declaration on Climate Change, in which the message to world leaders was clear: end the era of fossil fuels and kick big polluters out of the climate talks. Profit should not come before people and the planet.

Yet back at COP23 here in Bonn, which is officially hosted by the Pacific island of Fiji, big polluters are among the sponsors: BNP Paribas and Iberdrola. BNP recently announced it would no longer finance fracking or tar sands activities, which is positive news, but it remains committed to fossil fuel projects such as Liquified Natural Gas (LNG) terminals which don’t primarily deal in fracked gas. Iberdrola has also been on a big PR offensive to rebrand itself as a clean energy giant, but is still betting on not-so-natural gas – a fossil fuel with a devastating climate impact that has no role in a clean energy future, according to a new scientific study.

As well as sponsoring the talks, big polluters profiting from climate change are stalking the corridors. However, Fiji’s COP23 President has called for a special ‘Open Dialogue’ session during the negotiations to discuss the issue of conflicts of interest and whether those causing the problem should be having a say on how to solve it. There’s a big push from civil society group and governments to address the issue, but the EU and US have been blocking progress, more concerned with protecting their fossil fuel industries than the climate.

Talking to a Dutch negotiator on Tuesday, he argued that oil and gas company Shell (one of the world’s biggest polluters) should be part of the process, and was against excluding them. Shell has friends in very high places: at national level, the new Dutch finance minister even used to work the oil and gas major, before taking a spin through the revolving door to government. Recent research from CEO showed how influential the gas lobby has been in Brussels, with Shell as one of the biggest spenders. The industry as a whole spent more than a hundred million euros in 2016 and employed over a thousand lobbyists, with the result that the EU appears to be locked into 40-50 more years of fossil fuels.

The negotiator also admitted that the Dutch government had accredited the Confederation of Netherlands Industry and Employers (VNO-NCW), the national member of BusinessEurope, a notorious blocker of climate action. Not only does VNO-NCW get to attend closed-door negotiations, it also gets a daily briefing from the government.

With the fossil fuel industry so present in policy making, it’s no wonder the talks – and climate action – are moving at a glacial pace. That’s why it’s time to end their grip over climate and energy policy. There are still two weeks of negotiations to go, and whether you’re inside the talks trying to kick big polluters out or inside a coal mine shutting down the diggers, the battle lines are drawn: polluters and their profits vs people and the planet.

For further reading, take a look at our latest report, The Great Gas Lock-In, which looks at the fire-power of the gas industry and its presence as an effective lobbying force in Brussels and national capitals. Another recent publication released in time for the COP, Polluting Paris, assesses how Big Polluters are undermining global climate policy

This article was written before the collapse of the planned government and helps explain  the EU political elite’ panic.. The 5 Star Movement is right. Although convicted of tax-dodging or corruption you can be a […]

This is a long piece, but we felt it was worthy of being posted in its entirety. John Weeks is Professor Emeritus at SOAS, University of London, and associate of Prime Economics On 5th January 2018, […]