The problem of riders having no space to wash and use the toilet affects women in particular, and has been raised with the digital platform companies but with little to no action taken

Trade union CCOO has opened up part of its Barcelona headquarters to app-based food delivery workers, commonly known as ‘riders’, to wash and use the toilet, and has condemned the digital platforms for failing to provide these basic sanitary conditions for its workers.

With temperatures in Barcelona reaching over 30 degrees, the space, at 16 Via Laietana, provides fresh water fountains and toilets for all riders, regardless of whether they are a member of the union.

“Thus, they deny them access to the toilets in their offices and premises, and the possibility of getting water. This lack of access to toilets is generating a situation of great concern and patience among the community, as they do not have a place where they can carry out their needs.

“This problem is particularly serious for working women, who are unable to access hygiene areas during their menstrual period.”

In July, riders for the Spanish food delivery platform Glovo protested outside its headquarters in Barcelona to demand access to toilets, rest areas when waiting for pick-up’s and battery chargers for their bicycles.

Carmen Juares, trade union organiser at CCOO, shared an image on social media of a device some riders have had to use to urinate while working. 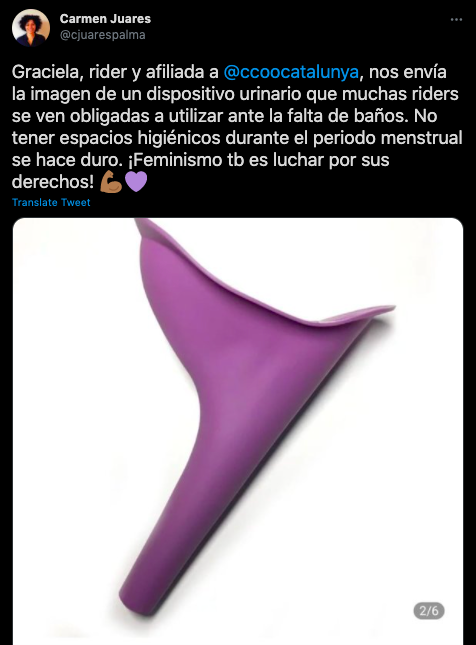 “Graciela, rider and affiliate of CCOO, sends us the image of a urinary device that many riders are forced to use due to the lack of toilets,” Juares writes. “Not having hygienic spaces during the menstrual period is hard. Feminism is also fighting for your rights!”

The problem of lack of sanitary conditions for riders is not exclusive to Spain. In November last year, The Guardian reported that major fast-food restaurant chains including McDonald’s, KFC, Nando’s, Subway and Wagamama have denied delivery workers access to restaurant toilets, a decision which the UK Government’s workplace health & safety body, the Health & Safety Executive, said was unlawful.

“As a woman I can hardly just pop behind the bins like the lads, and besides, that’s illegal, unsanitary and disgusting,” Lana, a courier in North London, said. “This whole situation is humiliating, degrading and unhealthy and it’s affecting my income – I’ve only been able to book single three-and-half-hour shift because there’s no guarantee I’ll find a loo, I can’t risk booking in for a six-hour shift.”

One rider, Kenya Scarlett, told Huck Magazine in April that she stopped drinking water on 12-hour shifts to try to avoid using the toilet.

“I started becoming delirious, dehydrated and not having the energy to cycle,” she said.

Scarlett, who took time off work because of the problem, said she had also seen women “forced to change their tampons in the streets”.

“It’s not only a mental health issue – it’s a health and safety issue,” she added.

One week until ‘Riders Law’ comes into force

The CCOO’s initiative comes just over a week before the Spanish Government’s ‘Riders Law’ comes into force, which will create a presumption of employment status for digital platform workers in the food delivery sector.

The four big companies in the sector in Spain – Just Eat, Glovo, Uber Eats and Deliveroo – have all responded to the new Law differently. In line with its shift in policy across Europe,

Just Eat has already moved to an employee model for riders, albeit largely via sub-contracting. A collective bargaining agreement is currently being negotiated between Just Eat and Spanish unions CCOO and UGT, and will be the first of its kind in Spain if agreed.

Glovo has proposed a mixed-model, hiring 2,000 employees directly while continuing to operate a self-employed model for the majority of its riders, albeit with changes which the company claims will make it compliant with the Riders Law. This change includes allowing riders to set their own prices for deliveries, a move which will create a race-to-the-bottom on pricing among riders. CCOO and UGT are preparing to take the company to court after 12 August for operating illegally.

“We are going to demand that the Ministry of Labor move a file in this situation and we are going to file a complaint. In fact, we are evaluating whether to file a criminal complaint,” Ruben Ranz, from the UGT, said.

“The most embarrassing thing about this new model is the downward auction that forces the distributors to put up the price to the orders and stick between them. Whoever puts high prices will not receive orders. It is shameful that they download it on the ‘riders.”

Uber Eats has not publicly announced its plans, but have let it be known to riders that they plan to use a sub-contracting model which appears to be similar to that of Just Eat.

The decision of Deliveroo has caused most agitation, as it has decided to pull out of Spain all together. This decision, which is thought to partly be about the Riders Law and partly about the company’s low market share in Spain, has on the one hand re-ignited opposition to the Riders Law from the far-right party Vox and anti-Riders Law groups of riders, while on the other hand has led leftist activists and campaign group RidersXDerechos to say ‘good riddance’ to the company if it is not willing to abide by labour laws.

This ia a further excellent article explaining the current stand-off between Catalonia and the Spanish government. Sergi Cutillas is an economist and worked in the financial sector before taking up his work as a financial […]

Michelle Meagher, Nicholas Shaxson: The US is taking on its corporate monopolists – now the rest of the world must follow

As Joe Biden’s administration starts to challenge the democracy-warping powers of giant multinationals, Britain and Europe risk being left behind Michelle Meagher is co-founder of Balanced Economy Project, competition lawyer and author of ‘Competition Is […]