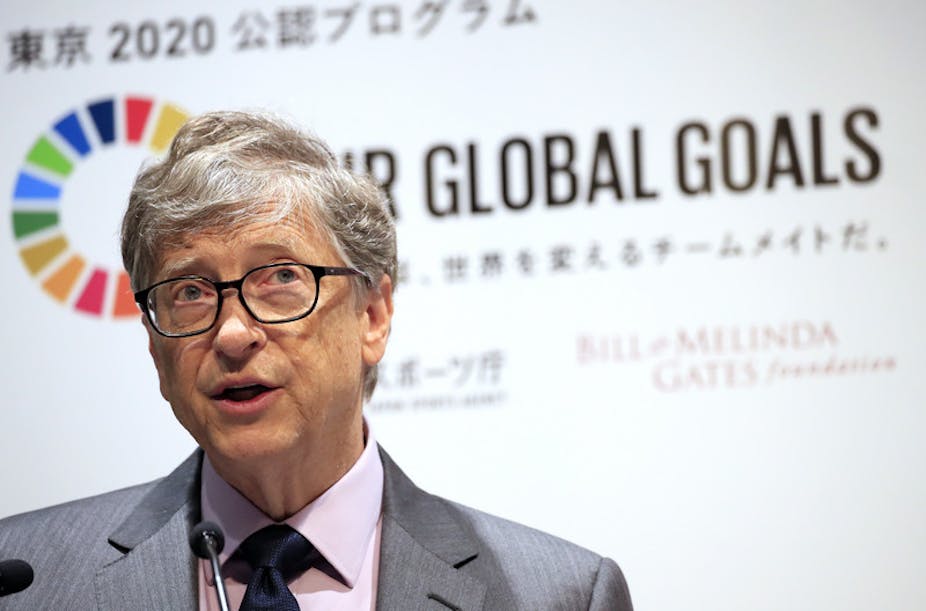 The coronavirus pandemic has produced a surge in philanthropic giving from some of the world’s wealthiest people. Bill and Melinda Gates, longstanding champions of global health, have committed funds to research the disease and manufacture a vaccine when one becomes available.

Jack Dorsey, co-founder of Twitter, has pledged US$1 billion (£816 million) for “global COVID-19 relief”. Then there are Jack Ma, Li Ka-Shing, George Soros, Giorgio Armani and Jeff Bezos – other examples of billionaires giving staggering amounts of money to help alleviate the suffering caused by this global crisis. It is not surprising that they have enjoyed widespread praise and acclaim.

Indeed, it is well deserved. But the situation also illustrates a profound imbalance in society.

Consider for a moment whether you would agree to be a slave. Let’s say a kindly benefactor offered you a better standard of living than that which you currently enjoy, or can realistically aspire to, and credibly promises to treat you very well. The only condition is that they would own you.

Would you accept the offer? My suspicion is that most people would not.

Slavery is incontrovertibly wrong, though it is important to understand why. The depictions we see in popular culture often emphasise the cruelty and exploitation. These are terrible, but they are not at the core of what’s wrong with owning another person.

If they were, then we would not have a problem with the idea of a kindly benefactor. The real problem with slavery lies in its structure as a social relationship, specifically with the distribution of power.

Philosophers like Philip Pettit have spent the past few decades putting forward a conception of liberty that uses slavery as the archetype of “unfreedom”. Unlike Thomas Hobbes or Isaiah Berlin, he doesn’t think of freedom as the absence of interference, but the absence of arbitrary interference.

Pettit argues that the problem with slavery is not that the slave is interfered with in a cruel or exploitative way, but simply that their owner has the capacity to interfere in their choices at will. Well treated slaves may be in an enviable condition compared with abused slaves, but they still have no control over an owner’s power to interfere. This is what it means to be dominated.

Even in circumstances where an owner is benevolent, the slave will be aware that their choices are based on the master’s tacit permission. And if we are worried about domination, we must worry about billionaire philanthropy.

This becomes acute in times of crisis, because it leaves matters of life and death in the hands of a few powerful individuals who lack any constraints on their power other than their own conscience. Freedom is at risk when the imbalance of wealth and power is so stark. How healthy can it be that so many people in the world are utterly dependent on the generosity of billionaires?

The provision of healthcare for millions of people rests on their goodwill and nothing else. They choose what to give, how to give it and who to give it to. They establish large organisations that have a profound influence on public bodies.

The Gates Foundation, for example, is the largest funder of the World Health Organization after the United States. The foundation’s influence shapes the global health agenda in a way that has been already been described as a “cartel”. Now that Donald Trump appears set to stop American funding for the WHO, the foundation will be even more important. Indeed, it has already committed an additional US$150 million.

This crisis has laid bare the raw power of the state as millions of people have been forced into quarantine and isolation. Even in such times of crisis, we try to minimise that arbitrary power through checks and balances, the rule of law, and democracy. Yet few seem concerned about the power of private organisations. These are organisations that are as powerful as some states, but lack constraints and accountability.

In short, too many people in the world have to rely on the generosity of philanthropists – it’s a stark illustration of the gap between the very rich and the very poor, and the lack of freedom the very poor have.

These are not trivial issues. They will decide who lives and dies.

I do not think that most billionaire philanthropists have bad intentions, quite the opposite in fact, but that’s irrelevant. As I argue in my recent book Global Poverty, Injustice and Resistance, domination is a structural relationship. It is about the distribution of power between human beings.

You might say that the world is a better place for having billionaire philanthropists in it. That is true, but it is not enough. No one with such power can be above scrutiny.

In A Theory of Justice, the political philosopher John Rawls claimed that moral progress was made when people stopped killing captives in war and enslaved them instead. He is correct – it is better to be a slave than a corpse. But that does not mean anyone should be content with being a slave.

Once the COVID-19 pandemic has passed, we will take time to mourn our dead and celebrate everyone who helped save lives, including people like Bill and Melinda Gates. But then we should ask why so many lives depended upon the munificence of billionaires rather than transparent, accountable and adequately funded public agencies.

We should ask why we don’t have stronger international organisations that are not beholden to wealthy states or persons. We should ask why billionaires are allowed to endow immensely wealthy, tax-protected philanthropic trusts, rather than paying more taxes. We must ask why health was treated as a privilege, not a right.

Richard D. Wolff – The U.S. Is Borrowing Its Way to Fascism

“Fascism merges private capitalism and the state. Political power then enforces capitalism’s basic rules: the economic dominance of the major shareholders and their top directors and managers.” Do not panic, Wolff is writing about the […]

This is something most people dare not even contemplate: after the coronavirus we shall not return to the world as we knew it. It is a tragic opportunity, but as we recently wrote, “The Coronavirus […]

It has been extremely irritating to constantly read in articles about the Paradise Papers that what is being reported is not illegal. This is not necessarily correct and is certainly not necessary. A journalist is […]