5 March 2021 was the 150th anniversary of the birth of Rosa Luxemburg, the great revolutionary socialist of the Polish-German labour movement.  Luxemburg’s contribution to socialist ideas and to the struggle to replace capitalism is too manifold for a short blog post to do her justice.  So I won’t attempt to do a proper job here.  Instead, I shall offer a few comments on her contribution to Marxist political economy along with some suggestions for some very useful critiques of her work. 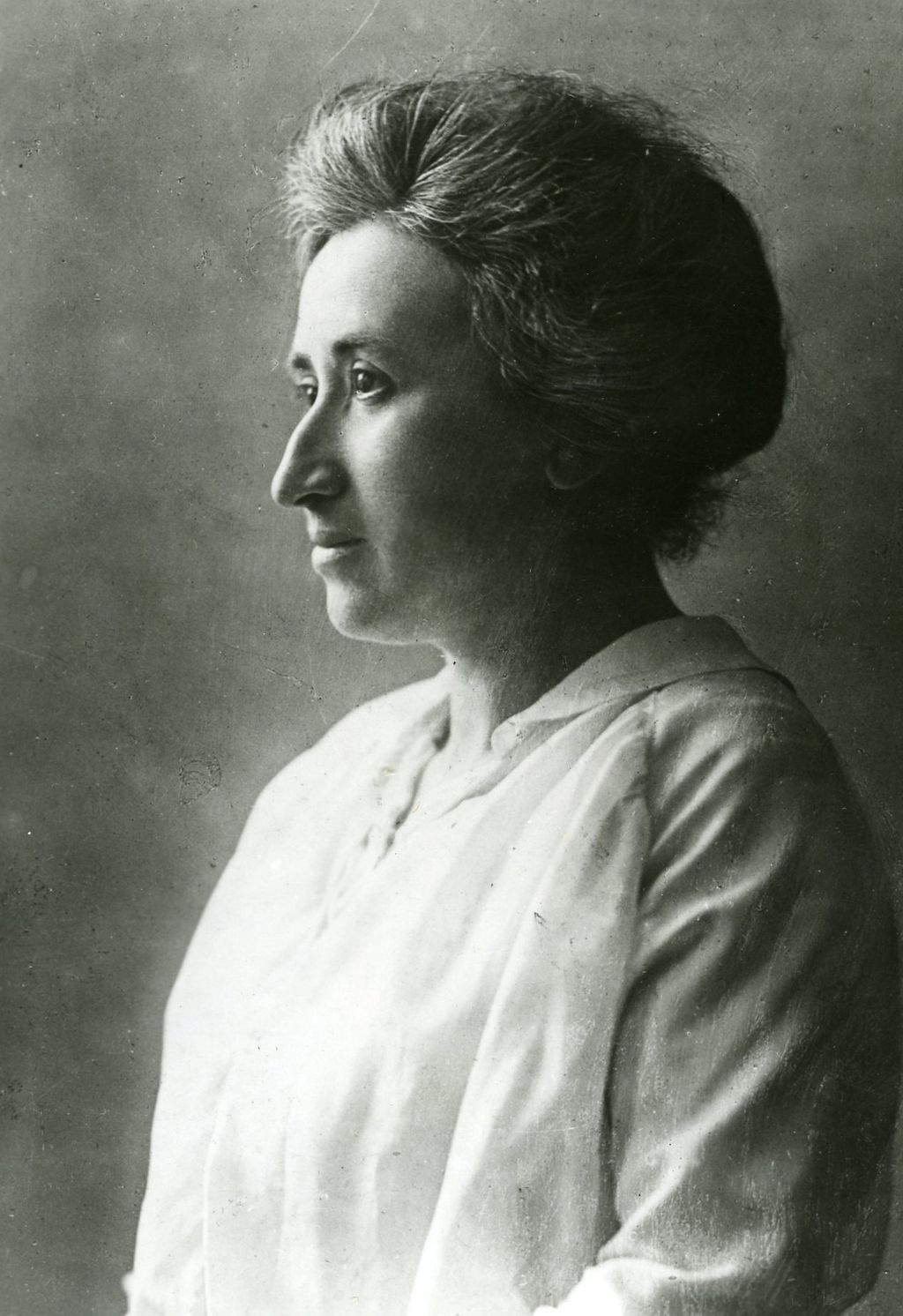 Since the 1970s there has been a Collected Works in German. But more recently, there is a new Complete Works in English, edited by Peter Hudis, in fourteen volumes.  As Hudis explained in an article in Solidarity 356 (11/3/15: bit.ly/hudis-rl), “given the amount of time, care, and attention that she gave to developing her major economic works, it makes sense to begin the Complete Works with her contributions to the field of Marxian economics and those fill the 1200 or so pages of the first two volumes.”

Luxemburg’s four actual books (three published, and a larger one never completed) were all about economic theory: The Industrial Development of Poland, The Accumulation of Capital, the Anti-Critique, and the Introduction to Political Economy.  She was a formidable economist by all standards, and one who reckoned that economics was “her field”. Her most famous work was The Accumulation of Capital in which she set out to refute the reformist views of Bernstein and Kautsky, the German Social Democrat leaders, that capitalism would not ‘collapse’; and the theory of Rudolf Hilferding, the Austrian Marxist that monopoly and finance capitalism would provide a degree of stability for capitalist accumulation.

As is well known among Marxist circles, Luxemburg attempted to refute these views in her book by arguing that there was an inherent tendency for capitalist accumulation to overreach the market for buying the goods and services being produced.  In her view, that showed that capitalism could and would get into crises; and moreover, it also explained imperialist expansion.  To avoid  crises of overproduction at home, capitalism was forced to search for new markets overseas and find buyers for its goods in the non-capitalist sectors of the world.

She argued that Marx’s analysis of crises fell short here.  Marx had failed to see in his reproduction schemas in Volume Two of Capital that this was the ultimate cause of crises: namely the overproduction of capital goods relative to demand (both from capitalists and workers in the imperialist countries), forcing capitalism to find that demand from the colonial non-capitalist peasants.

She was not afraid to take on Marx as well as other leading theorists.  As she concluded in her Anti-Critique: “Marxism does not consist of a dozen persons who have granted each other the right to be the ‘experts’, before whom the masses are supposed to prostrate themselves in blind obedience, like loyal followers of the true faith of Islam. Marxism is a revolutionary outlook on the world that must always strive toward new knowledge and new discoveries… Its living force is best preserved in the intellectual clash of self-criticism and in the midst of history’s thunder and lightning”.

There are many effective critiques of Luxemburg’s thesis.  I can list a few papers here that go into those critiques in much more detail than this short post.

I think the most effective critique of Luxemburg’s crisis theory came from Henryk Grossman.  Grossman acknowledged Luxemburg’s work.  He agreed with her that the expansion of imperialism was due to the capitalist system’s proneness to economic crises. But he differed from Luxemburg in regarding imperialism as a factor which offset the tendency for the rate of profit to fall, not as the need for capitalism to find markets for over-production. Imperialism was a counteracting factor to the key underlying cause of crises and ‘breakdown’ in capitalist production, namely the tendency for the rate of profit on capital to fall over time.

Lenin was also critical of Luxemburg’s explanation of imperialism.  In his famous book on Imperialism, he argues that imperialism is the result of capitalism’s need to export capital which arises “from the fact that in a few countries capitalism has become ‘overripe’ and (owing to the backward state of agriculture and the poverty of the masses)” and “capital cannot find a field for ‘profitable’ investment.”  Grossman went further than Lenin: “[W]hy,” then, “are profitable investments not to be found at home?…..The fact of capital export is as old as modern capitalism itself. The scientific task consists in explaining this fact, hence in demonstrating the role it plays in the mechanism of capitalist production.”

Luxemburg knew from reading Marx’s Capital about the law of profitability, although Marx’s notes on Capital, Grundrisse, were not available to her. But she dismissed the law as irrelevant to capitalist crises.  For her, the law was a long-term thing. Indeed, it was so long-term, as she famously put in Anti-Critique, when answering criticisms of her Accumulation book, that “There is still some time to pass before capitalism collapses because of the falling rate of profit, roughly until the sun burns out”.

But Marx did not see the law of profitability as something in geological time but very relevant to human time.  “When Adam Smith explains the fall in the rate of profit from an over-abundance of capital, an accumulation of capital, he is speaking of a permanent effect and this is wrong.  As against this, the transitory over-abundance of capital, over-production and crises are something different.  Permanent crises do not exist.” (Theories of Surplus Value).

Peter Hudis has added an interesting anecdote to Luxemburg’s rejection of Marx’s ‘most important law in political economy’. He wrote to me in an email:  “what is less well known, is the person she is responding to” in dismissing the relevance of the law of profitability in crises. “He was an anonymous reviewer of ‘The Accumulation of Capital’ in ‘Dresdener Volkszeitung’ of January 1913.  Several years ago, when I was editing ‘The Letters of Rosa Luxemburg’, I managed to track down that the author was Miran Isaakovich Nakhimson. Born in 1880, he joined the Bundists in 1898 and became known as one of its most prominent political economists. Although virtually forgotten today, he was a considerable presence at the time.”

Hudis goes on: “It’s fairly clear from Luxemburg’s correspondence that she was particularly irritated by Nakhimson’s critique–which is interesting, since he was virtually alone among her critics in going after her for neglecting Marx’s law of the rate of profit. In a letter to Franz Mehring in February, 1913, she writes, “Too bad that Nackhimson has a slap in the face coming to him, but perhaps in the end this would be too great an honor to give this scoundrel and expert at confusion.”  A little harsh, it seems, on the Bundist economist.

Rosa Luxemburg was murdered by the Freikorp troops under the control of the Social Democratic government during the 1919 uprising.  Nakhimson was murdered by Stalin’s NKVD in 1938.  Both economists were revolutionary fighters for socialism and suffered a similar fate, if by different hands.

Norbert Häring – How does Germany’s Monopolies Commission combat market concentration? By making sure that no good data is available

Norbert Häring has wirtten an excellent piece of how Germany avoids regulating monopolies. Although in other areas the German government is staunchly ordo-liberal, with regards to monopolies it has abaondoned these principles. Norbert Häring is […]

Antonio Lettieri – Italy and the disappointing history of the Euro

Italy is the only country where the old establishment parties have been swept away from the scene. The clash with the European commission has been focused on compliance with the rules – a sort of catechism – […]

Jeremy Leggett is a British social entrepreneur and writer. Cross-posted from Future Today The schoolchildren on strike from school today in more than 100 countries are staging a global protest essentially about the failure of […]