Milton Friedman’s doctrine, the favouring of free markets and small government, prevails today, and the resulting tendency towards corporate monopolies, despite well-meaning proposals for better “rules of the game”. 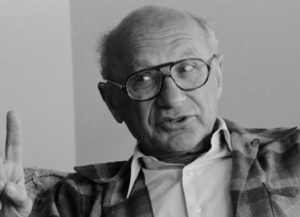 The Stigler Center at the Booth Business School of the University of Chicago has just published an e-book commemorating Milton Friedman’s pronouncement on the valuable and virtuous role of modern capitalist corporations. Named after leading neoclassical economist George Stigler, the Stigler Center wanted to honour the work of Milton Friedman in justifying capitalist corporations as a force for good.

For those who don’t know, Milton Friedman was the leading economist of the ‘Chicago School’ in the post-war period and the renowned exponent of ‘monetarism’ ie that inflation of goods and services prices is caused by changes in the quantity of money circulating in an economy.  Friedman was notorious for his support of ‘free markets’, small government and dictatorships (he gave advice to the Pinochet dictatorship in Chile in the 1970s).  See my 2006 review of Friedman’s work in my book, The Great Recession, p119.

What interested the Stigler Center was Friedman’s view on corporations, the form that modern capitalist companies have taken since the late 19th century, replacing most firms directly owned by their managers (family owned or partnerships).  The ‘Friedman doctrine’, as it has been called, says that a firm’s sole responsibility is to its shareholders.  And as such, the goal of the firm is to maximisse returns to shareholders.  Corporations are there to maximise profits and that should be their sole aim, without any distractions of ‘social responsibility’ or other ‘external’ concerns. Indeed, if firms or corporations do just that, in the world of free markets, gains to the whole community will follow: “there is one and only one social responsibility of business—to use its resources and engage in activities designed to increase its profits so long as it stays within the rules of the game, which is to say, engages in open and free competition without deception or fraud.” (Friedman).

The Stigler book aims to defend and promote Friedman’s characterisation of the aim of capitalist corporations. But it also contains essays by those who disagree.  I won’t discuss the details of the essays defending Friedman’s doctrine; I prefer to look at the arguments of those who disagree. But let’s start by saying that Friedman is clearly right: the aim of capitalist firms or corporations is to maximise profits for their owners, whether directly owned or through shareholders. And he is right to say that any other motives or aims adopted can only detract from achieving that profit.

Of course, where Friedman is wrong is to assume that capitalism’s drive for profits in a ‘free competitive market’ will benefit all, not just capitalist owners, but workers and the planet. It’s nonsense for defenders of Friedman in the Stigler book, like Kaplan, to conclude that “Friedman was and is right. A world in which businesses maximise shareholder value has been immensely productive and successful over the last 50 years. Accordingly, business should continue to maximise shareholder value as long as it stays within the rules of the game. Any other goal incentivises disorder, disinvestment, government interference and, ultimately, decline.”

But the critics of Friedman’s doctrine from the Keynesian/heterodox economists fall into a trap. Their line, as argued by Martin Wolf and Luigi Zingales, is that Friedman’s doctrine fails because there are no free competitive markets in modern capitalism.  Corporations have become so big that they have become ‘price makers’, not ‘price takers.’  As Wolf puts it, the big corporations do not keep to the rules and regulations for a ‘level playing field’ in markets: “corporations are not rule-takers but rather rule-makers. They play games whose rules they have a big role in creating, via politics.”

The implication of this critique of the Friedman doctrine is that if corporations kept to “the rules”, then capitalism would work for all.  In other words, there is nothing wrong with private corporations producing for profit and exploiting their workers to do so.  The problem is that they have become too big for their boots.  We need to regulate them so that, in making their profits, they all compete fairly with each other and also take into account the “externalities”; ie. the social consequences of their activities.

This critique assumes that competitive capitalism is a ‘good thing’ and works.  But would competitive capitalism, if it existed or were imposed by governmental rules, deliver a ‘fair and just society’?  In the days when ‘competitive capitalism’ supposedly existed, namely in the early 19th century, Friedrich Engels pointed out that free trade and competition in no way provided an equitable and harmonious development of production for the benefit of all.  As Engels argued, while the classical economists offer competition and free trade against the evils of monopoly, they fail to recognise the biggest monopoly of all: the ownership of private property for a few and lack of it for the rest. (See my book, Engels 200). Competitive capitalism did not avoid increased inequality, damage to the environment, extreme exploitation of its workers and regular and recurring crises in investment and production. That was precisely because the capitalist mode of production is for profit (as Friedman says) – and from that, all else flows.

Yes, said, Engels, “competition is based on self-interest and self-interest breeds monopoly.  In short competition passes over into monopoly.”  But that does not mean monopoly is the evil that must be banished and that a return to free markets and competition (within the rules set) would work. This is the trap that some left economists fall into when they talk of the evils of ‘state monopoly capitalism’. It is not monopolies as such, or their ‘capture’ of the state, that are at the heart of the argument against Friedman’s doctrine.  It is capitalism as such: the private ownership of the means of production for profit. This is the strongest critique of Friedman’s justification of the corporation.

This is not only a wrong analysis of modern capitalism; it is utopian in the extreme.  How can any of the above inequities described by Wolf be ended while preserving capitalism and the corporations?  We only have to consider the never-ending story of banking folk and their connivance with the corporations to hide their profits from national governments.  According to the Tax Justice Network, multinational firms shifted more than $700 billion in profits to tax havens in 2017 and this shifting reduced global corporate tax receipts for national governments by close to 10%.

Carbon-emitting fossil fuel corporations have shifted billions of profits into various tax havens. In 2018 and 2019, Shell earned more than $2.7 billion – about 7% of its total income in those years – tax-free by reporting profits in companies located in Bermuda and the Bahamas that employed just 39 people and generated the bulk of their revenue from other Shell entities. If this oil-and-gas major had booked the profits through its headquarters in the Netherlands, it could have faced a tax bill of about $700 million based on the Dutch corporate tax rate of 25%.

And then there are the FAANGS, the big tech corporations which have amassed huge profits during the COVID-19 pandemic while many small companies go to the wall.  They dominate software and distribution technology through intellectual property copyrights and suck up any competition.  Governments around the world are now considering how to regulate these giants and bring them under the “rules of the game”. The talk is of breaking up these ‘monopolies’ into smaller competitive units.  I’m sure that Friedman would have approved of this solution as part of his ‘doctrine’.

But would it solve anything really? More than a century ago, US antitrust regulators ordered the break-up of Standard Oil. The company had grown into an industrial empire that produced more than 90 per cent of America’s refined oil output.  The company was broken up into 34 ‘smaller’ companies.  They still exist today.  They are named Exxon Mobil, BP and Chevron.  Do Wolf, Stiglitz and opponents of ‘monopoly capitalism’ really reckon that the ‘Standard Oil’ solution has ended the ‘irregularities’ of the oil corporations, improved their ‘social responsibilities’ and environmental safeguards globally?  Do they really think ‘stakeholder capitalism’ can replace the corporation and do the trick? Regulation and the restoration of competition won’t work because all it means is that Friedman’s doctrine continues to operate.

Civio – Half of MEPs do not disclose any meetings with lobbyists

Meetings with dozens of assistants and thousands of civil servants fly under the radar of the EU’s transparency register. The heads of the pharmaceutical industry, EFPIA is one of the most active lobby groups. In […]