It is becoming increasingly clear that with its decline liberal democracy is going into endtime mode. World leaders are acting like reckless school children and we should all be terrified 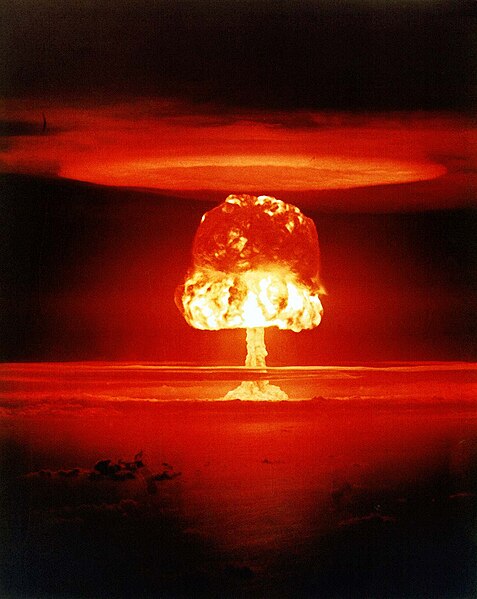 If you’re not scared just now you should be. The world is petrifying, and it is so for a simple reason – almost without exception it is being run by unruly children who lack wisdom, patience, tolerance or foresight. Yet my god are they in love with themselves, even as they push us further and further towards a real risk of the demise of civilisation.

Soon I will be unable to write the words that follow, because soon the provocations that Western powers are currently accelerating will kick off some kind of war. And when that war kicks off the armies of liberal centrist commentators will condemn those who point to the escalations and provocations that brought us to the precipice.

We will be accused of whataboutery, or siding with the enemy, or being useful fools, or that perennial favourite ‘haters’ who ‘hate America and the free world’. So let me set out my case before the liberal centrists have an enemy bogeyman to hide behind to deflect from their complicity in the horrors to come.

Right now the power-drunk forces of Western global dominance have clearly seen the ramp-up of militarism and paranoia around the Ukraine War as the perfect cover to escalate further and further. They are spending on weapons like there is no tomorrow, pumping oil and gas like the world is expendable, provoking and bullying and inflaming and drawing lines where lines don’t belong.

The US has made its position on Taiwan unambiguously clear – it will actively oppose a Chinese invasion. There is not much nuance to that position and no-one has failed to hear it. In that context Nancy Pelosi’s visit to Taiwan is nothing more than a clear, planned and intentional ramping-up of tension with China. It serves no diplomatic purpose other than to humiliate.

If you want to judge your actions, reverse them; in your head you should do unto yourself what you are doing to others. So let’s imagine that next week Beijing announces a major diplomatic visit to Cuba. It indicates that any further military suppression of the people of Cuba will be met by force and that the the People’s Liberation Army will defend the freedom of the tiny nation.

During its visit the Chinese delegation offers extensive weapons sales to Cuba and starts to provide them with critical intelligence information to enable them to ‘repel the threat to their freedom posed by the US’. Would that be a contribution to a safer world?

Or try this; the Taliban acquire drone technologies which enable it to strike targets on the US mainland. It identifies a target it believes is a legitimate security threat to Afghanistan so it eliminates that threat with a missile, all without communication with or permission from Washington.

Yet that is what the US has just done in reverse. It is seldom said out loud but extra-judicial murders in another sovereign territory is an international crime, a blatant breach of the ‘rules-based order’. Much has been made of Russia’s programme of poisoning opponents abroad, yet Russia’s assassination programme is tiny compared to America’s. Remember, President Obama dropped more bombs than any world leader in all of human history, most of them by drone.

We stand firmly beside Israel which is executing scientists in Iran at a rate Putin could only dream of. We sell weapons to virtually anyone and pretend it’s about ‘defence’, not the pursuit of war. We have used the Ukraine War to push an aggressive military presence closer and closer to Russia’s border. The US is openly and explicitly setting out a policy of economic warfare with China.

All of this lies somewhere on a scale that runs from utterly reckless to unequivocally illegal. It seems that nowhere in the world is a conflict smouldering without someone from the ‘rules-based liberal world order’ standing over it pouring on accelerant.

It is worth understanding why this is so dangerous, how unsophisticated and idiotic our current stance is. During the Cold War there were a small number of precepts which may well have saved the planet from a devastating Third World War.

The first was that, no matter the hostilities, a clear channel of communication was always open. Always. It could be confused-going-on-unhelpful (the Cuban Missile Crisis is the case study of this), but time and again it ultimately saved us from dangerous escalation.

Another was a pragmatic understanding of the significance of ‘sphere of influence’. Both sides – the West and the Soviet Union, realised that any major power has a region around it which is of significant strategic importance to that nation. Throughout the Cold War the attempts to interfere in the sphere of influence of the other side were heavily restrained (which is why the Cuban Missile Crisis was such a crisis).

And a crucial precept, certainly in the West, was a recognition that there was no final way out of the Cold War if the West kept its boots so firmly on the neck of the Russians that there was no breathing space because it would close down all the space which might enable internal reform.

None of these sensible precepts apply today. There is zero direct communication between Russia and the US and virtually no indirect communication. No-one talks. The concept of ‘sphere of influence’ is not only not recognised, the Western liberal commentator will take your head off for even mentioning the concept.

And the new theory is that the way to enable internal reform is to try to destroy a nation until it finally throws up the white flag and emerges at the other side a liberal democracy.

And never, ever forget, it is a consequence of the grotesque influence of the bomb-makers and weapons-dealers, corporations which seem able to drag Britain and America round on a leash.

In all this it is telling that it is the last remnants of the old-school Cold Warriors are often more aligned with the Elders (a distinguished group of global figures trying to bring sanity to the world) than with US foreign policy.

We are an era of outright fucking idiots and this just isn’t said enough. Those centrist ideologues who are most utterly certain that they are the solution and not the heart of the problem see no barrier or limit to their militarism. I trust we shall get no more lectures about ‘toxic masculinity’ from a First Minister who distastefully Tweets ‘strong man’ emojis onto a celebration of death and destruction.

Centrism is, as I have explained before, nothing whatsoever to do with being in the centre. It is an ideology which believes in a domestic and global elite whose destiny it is to save the world from the plebs. And it is that elite (from weapons manufacturers to oil executives, newspaper owners to nodding dog politicians) who are dragging us to the edge of the precipice.

That this precipice gives us simultaneous views over an environmental crisis, a military crisis, an economic crisis and a democratic crisis is beyond unnerving. Any one of these could drag us down any minute now.

It used to be the case that our elites understood that there was a constraint on their actions. Then some mad man in the George W Bush administration wrote in a New York Times Magazine article that “We’re an empire now, and when we act, we create our own reality”. That is the founding document of the ‘centrist, liberal world order’.

If centrism isn’t overthrown soon and replaced by something sane, we’ll be lucky to see the end of the century. It’s not too late, but we’re getting there.

The sanctions against Russia, the decline of Europe, and the American dream of becoming a landlord and financier of the world This is a transcript of an interview with Renegade Inc. Michael Hudson is the author […]

Positive Money Europe – ECB announces new giant subsidy for banks – but why would it work this time?

In response to a reduction of growth and inflation prospects for 2019, the European Central Bank (ECB) announced new long-term subsidized loans for banks. But why would it work better this time? By Stan Jourdan, […]