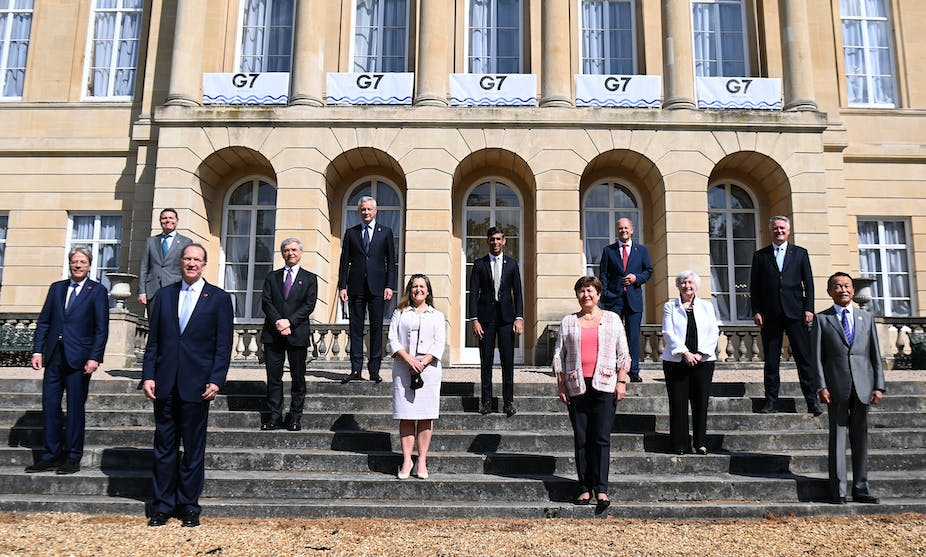 Finance ministers in London from the G7 group of wealthy nations have agreed a deal that has been described invariably as a landmark that will transform the landscape of global corporate tax. Although details are somewhat scant, and the supposed deal is still in a negotiation phase, it is certainly transformational.

I do not seem to be alone in this. Stock markets around the world have taken the deal in their stride, barely registering what is supposed to be biggest transformation in corporate taxation in the past 100 years. It seems to be telling us that post-tax corporate profits are unlikely to change much, if at all.

The international business taxation regime that emerged in the early 20th century said that active business income would be taxed in the place where the business is located. But inherent in this was a loophole, since a large portion of global trade takes place in the form of intra-firm trade between subsidiaries within the same company. Companies often transfer large portions of profitable activities to subsidiaries in low-tax jurisdictions, aka tax havens, so that the income appears to have been sourced there. As a result, they are taxed at very low levels.

Regulators are all too aware of these techniques of tax avoidance, known as transfer pricing. They have introduced a whole suite of regulations to stop these practices, but it doesn’t seem to have had the desired effect. Instead, it has given rise to a different type of tax avoidance schemes known as jurisdictional arbitrage.

Such schemes take advantage of gaps, loopholes or omissions in the laws of one country to play against the rules of another. Apple, for instance, took advantage of the difference between the rules in Ireland and the US regarding where business income is taxed (known as tax residency) to create two subsidiaries in Ireland that had tax residency nowhere.

Apple assigned to these two subsidiaries the majority of its sales income from outside the US. And since these subsidiaries were tax resident nowhere, they could not pay tax anywhere. This is currently the subject of a case being brought against Apple by the European Commission.

Amazon, in contrast, has devised a system of internal transfers that takes advantage of the generous US tax credit system. By transferring losses from its international segment to the US, it ends up paying little or not tax at all.

Moreover, jurisdictional arbitrage is only for starters. Sophisticated firms – not least Amazon – also take advantage of accounting rules in conjunction with financial instruments such as derivatives and swaps to modify the very accounting data that is used in calculating taxation. They can modify the location, timing or even accounting categories of income, turnover and the like, to shift profits either from one place to another, or often to a future that never comes.

The new system agreed in London is aimed at some of these techniques. First, it proposes to impose a global minimum of 15% corporate taxation. Now, let us be clear. A single corporate entity located in a 0% tax jurisdiction like the Cayman Islands or Bermuda is unlikely to be used for tax avoidance purposes nowadays, since there are enough anti-avoidance rules to ensure that it cannot.

Nonetheless, subsidiaries in Cayman, Bermuda – or in reality the Netherlands, Luxembourg, Switzerland, Ireland or Singapore – are often used as components in complex jurisdictional arbitrage schemes. Zero taxation plays an important role in these schemes.

Still, it is difficult to tell whether a global minimum rate might affect schemes like Apple’s “resident nowhere” Irish set-up. Equally, it is a mystery to me at this stage as to how Amzaon’s tax position might be affected. Hence, the G7 has come up with a second element to the new rules: tax must be paid where sales happen, not where the operation is registered. If adopted, the Apple scheme would not work any longer because Apple subsidiaries would pay tax where they sell their products.

We can anticipate already at this point new ways around the rules. The deal refers only to very large firms (though what “very large” entails is still unknown). It will also only affect firms with a 10% annual profit margin and above.

I suspect that if the new regime is sufficiently robust, the “very large” rule could see the biggest firms being broken up. Instead we might see groups of technically independent companies acting as an alliance to ensure the whole operation is below the threshold. We saw something similar with the rise of the so-called “shadow banking” industry, where onerous banking regulations gave rise to apparently independent sets of companies acting in effect together as banks to avoid the need for a banking licence.

Alternatively, the deal may encourage more of the techniques perfected by the Amazons of this world, using sophisticated accounting to grow in size under the guise of losing money.

The deal, in other words, may be transformational, but whether or not it will affect the amount of taxation paid by the corporate sector is a different matter altogether.

The conventional methods of stopping inflation do not benefit the many. Here some alternatives Yanis Varoufakis, former Finance Minister of Greece, Professor of Economics at the University of Athens, and author of several bestselling books […]

It is fascinating to observe that hardly anyone understands that corruption has become globalised. Everyone believes that their nation is especially corrupt. There is a worldwide web of corruption Anyway, here is Version UK Patrick […]

This is something new: an anti-EU political party with Modern Monetary Theory policies Carlos García Hernández is managing director of the publishing house Lola Books Originally published in Spanish in Ediciones Páralo Translated and Edited […]