During the early years of the eurozone crisis, I remember gauging its depths by the rapidly diminishing half-life of the celebrations that followed every European Union summit. Premature proclamations that the crisis was over inspired hope, which caused the money markets to rebound. But then, at some point, gloom would unfailingly return. As the years of austerity for the many and socialism for the few ground on, that point arrived sooner after each EU summit. 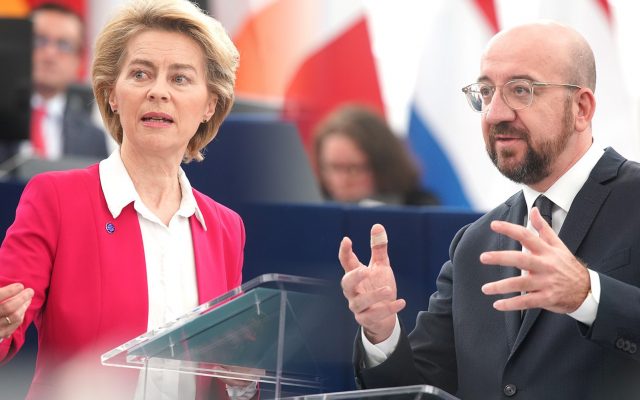 Could it be that, at long last, this sad pattern has been broken by last week’s summit, which resulted in a brand new, €750bn post-pandemic EU recovery fund?

Ignoring the predictably triumphant reception by the usual EU cheerleaders, hope that this time the EU may have got it right comes from smart critics of the leaders’ track record, such as my friend Shahin Vallée who described the recovery fund as “a leap towards genuine integration”.

It is not the size of the fund that gives commentators like Vallée hope. It is, rather, the fact that for the first time EU leaders seem to have acknowledged the indispensability of a common debt as the glue of any monetary union. True enough, the €750bn will be borrowed jointly by member states in proportion to their capacity so as to be spent in proportion to their need. This has been necessary for years but has been resisted doggedly by the richer countries – until now.

So, why is it that, although I endorse the idea of mutualised debt as a necessary condition for European unity, I believe that the EU’s latest decision is another step in the direction of Europe’s disintegration? For three reasons.

First, the recovery fund is a distraction from the elephant in the room: massive austerity. According to the International Monetary Fund, the eurozone’s total 2020 income will fall by 10%, causing an average budget deficit of more than 11%, with weaker countries such as Italy and Greece facing a much larger drop.

That would not be catastrophic per se, if it were not for the determination of Berlin and other governments to push member states to balance their books by 2021 (as witnessed by the 11 June Eurogroup communique). Even if the nascent recovery brings down, for example, Italy’s budget deficit to, say, 9%, to balance its books Rome must impose a cruel level of austerity equal to a new 9% of GDP in cuts and taxes. Similarly with Greece. Given that even Germany will have to practise austerity to balance its budget, the whole continent will be treated to an intensification of the doom loop between austerity and recession.

Second, the recovery fund is (macroeconomically) puny. For it to defend the union, it should pack a fiscal boost comparable in magnitude to the austerity tsunami down the line. It does not. Take Italy and Greece again, countries that must face down immense austerity. How much of this shock can the recovery fund monies help absorb? Not a lot, is the answer.

To arrive at a precise answer, we must first ignore the new loans on offer from the recovery fund (since new debt has never helped the insolvent) and concentrate exclusively on net grants. Italy has been allocated around €80bn and Greece €23bn. However, every member state must take on part of the new €750bn EU debt. Italy, for example, is liable for just under 13% of this debt while poorer Greece is liable for 1.4%. Once we subtract these new debts, Italy’s and Greece’s net grants come to just over €30bn and €12bn respectively – or 0.6% and 2% of GDP on an annual basis between 2021 and 2023. Compared to the prospect of austerity equivalent to 9% of GDP, which will be required to balance their budgets, these are puny sums.

Third, the political conditions under which the funds will flow are a Eurosceptic’s dream. When a recession hits the UK, the government’s budget deficit rises automatically as benefits flow disproportionately towards the most affected regions. The beauty of such a proper fiscal union is that no politician can decide which region gets which transfer. Imagine the sheer awfulness if parliament had to debate how much would be transferred to Cumbria, to Norfolk or to north Wales from Surrey, Sussex and west London. Britain would be wrecked by divisions that make Brexit look like an amicable affair. And yet this divisiveness has been baked into the EU recovery fund, complete with country allocations drawn up even before we know the effects of the recession on each region. It is almost as if the whole thing were designed by a cunning Eurosceptic.

As if that were not enough, our great and good leaders also decided that each national government will have the right to freeze payments, for up to three months, to any other government while it scrutinises how the money is to be spent. Endless recriminations are guaranteed, as the Dutch lambast the Italian government’s pension payments and Rome returns the favour with reports on the Netherlands’ famous tax loopholes. Imagine the mood in the room when such a challenge is made to, say, Spain, by a prime minister whose government the EU bribed, in the form of Thatcher-like rebates, to get the recovery fund across the line.

Optimists claim that, despite the clumsiness of the redistribution mechanism and its macroeconomic insignificance, the new common debt is creating facts on the ground; that it constitutes a decisive first step towards a proper federation. This is the familiar argument that Europe is moving in the right direction glacially until, when we least expect it, it leaps. Juxtaposed against this happy narrative is my hunch that we are moving in the opposite direction, toward disintegration.

Whether I am wrong (as I hope I am) or not will hinge on whether, by next year, a majority of Europeans feel that the recovery fund helped them recover. If they do, maybe the EU’s common debt can prove itself a harbinger of shared prosperity. For my part, however hard I try, I cannot see how this might be possible.

Robin McAlpine – Britain: This is the One Thing Which can Save Westminster

Forget all the rubbish you read from mainstream media and political pundits. If you wish to understand the current crisis in the UK, here it is. An equally excellent new article on this topic is […]

This is the second in a series of blogs looking at the relationship between Modern Monetary Theory and the proposals made by Positive Money. Rob Macquarie is an economist at Positive Money and leads its […]

Our mistake! Recently we commented that Jeremy Corbyn and the Labour Party were the only ones with a Plan B for Brexit. We forgot Colin Hines. He has neither retreated to a vague moral high […]