Transition to renewable energies – to redress past profligacy – needs to be enforced by an Environmental Justice Commission, as proposed by a Green New Deal for Europe

Alex Phillips is a Green Party Member of the European Parliament 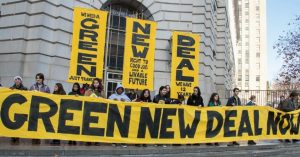 This summer has seen the UK swelter under some of the hottest days on record.

While much of the media irresponsibly framed this heatwave as a good thing, for the rest of us, it rang loud alarm bells of an imminent environmental emergency. These extreme temperatures leave people not only uncomfortable but they can also lead to death, especially amongst the elderly. For rural communities in particular, the impacts of scorching heat which dries out the land, followed by flash flooding, can destroy livelihoods.

But if we’ve begun to reap the disturbing fallout of climate change here in the UK, it’s nothing compared to the damaging and life-threatening effects that the Global South has long been having to deal with.

Climate change doesn’t affect us all equally, with those in the Global South being far more ‘climate vulnerable’ to soaring temperatures which result in an increased prevalence of droughts and therefore famine and migration. However the Global North – which is primarily to blame for the climate crisis that we are in – is only just seeing the impact of this emergency.

Environmental disparities are real; for many years, the Western world has steamed ahead with plans for aviation expansion, more road-building, dirty energy such as fracking, as well as an insatiable appetite for environmentally damaging foods – ignoring the impact all of these have on developing communities. Meanwhile, inner city communities with higher numbers of ethnic minorities in Europe and The United States tend to have to deal with environmental threats which more prosperous sectors of society don’t. In my region of the South East of England, there are big pockets of deprivation: 25.5% of children in Crawley are living below the poverty line and have to live in the polluting shadow of Gatwick airport.

Outside of Europe, climate change is responsible for extreme weather events like Hurricane Maria in Puerto Rico and Cyclone Idai in Zimbabwe which obliterate homes, destroy livelihoods and kill people.

The Grantham Centre for Sustainable Futures warned back in 2015 that around a third of the planet’s land has been lost over the past 40 years due largely to climate disasters and poor conservation, with more than 1.3 billion people living on agricultural land that is becoming less and less efficient – leading to failing harvests, poverty and famine.

Droughts have affected more than 1 billion people in the last decade – hitting people in developing countries hardest. Three out of four people living in poverty worldwide rely on agriculture and natural resources to survive – meaning that climate change affects those who are already the most at risk.

And this may account in part for the fact that global inequality is growing.

The gap between the Global North and its former colonies has become an increased dichotomy over the past 60 years. These countries that have been pillaged as a result of colonisation have been left with scant resources now have to deal with a climate crisis which isn’t their fault.

Where do we go from here?

Climate reparations are one way to go about undoing some of that damage – insisting that wealthier nations who were responsible for excessive carbon emissions in the first place transfer funds to poorer nations to deal with the consequences of climate change and pave the way for exciting new technologies that can transform people’s livelihoods, standard of living and environment.

Since the climate crisis is clearly the fault of the North, they’re responsible for helping the South adapt.

It is clear that there are no systems currently in place which are working to readdress that chronic and ever-increasing imbalance.

A Green New Deal for Europe, however, does offer a solution.

‘The Green New Deal for Europe is the first attempt at a political response to climate change that is on the same scale as the problem itself,’ says environmentalist and global warming expert, Bill McKibben.

McKibben doesn’t think that addressing climate change is impossible; he simply says that any response has to deal with the austerity and ‘economic short-sightedness that currently paralyse our society’.

This report envisions a GND as being comprised of three distinct institutions, dealing with investment, scientifically-backed regulations and environmental justice.

It’s this latter element – the Environmental Justice Commission (EJC) – which offers the best hope for targeting environmental disparities between the Global North and South.

The proposed EJC would be the first international body tasked with ensuring that the transition to renewable energies is also a just one: one which includes everyone, no matter where they live or work, in this new, exciting, positive adventure to tackle climate change and create secure, well-paid jobs which contribute to creating a new type of world which is truly sustainable.

This commission’s mandate would be to set a new international standard for research and reporting on environmental injustices – gathering data on the consequences of climate change, monitoring the implementation of Europe’s climate agenda and advising Governments all over the world on what environmental policies need to be put into place now to safeguard all of our futures.

Because the impact of climate change isn’t evenly distributed, the commission would strive to ensure that EU countries aren’t exacerbating the problems. Rather than allowing countries to make migration impossible, for example, the commission would develop strategies for helping with climate refugees and their claims for asylum.

A Green New Deal carries so many possibilities to make society fairer around the world. It promises better paid jobs, cleaner air and more accountability from richer nations who have got away with so much up until now. Economically, socially and environmentally, we finally have a positive and practical solution to a problem that up until now has seemed overwhelming.

This climate emergency affects us all – but it’s up to us to ensure that the Global South doesn’t continue to take the biggest hit.

A Green New Deal is our only option.

Antonio Lettieri – A Possible New Season for the Euro

An analysisof the current EU/euro crisis from the Italian perspective.  For the first time the majority in the European Parliament becomes unstable after the loss of consensus of the two dominant parties. The centre-left parties […]

Laurent Pech – The Rule of Law Compromise: The EU’s Gift to Autocrats

The EU has a long history of breaking laws and rules. Germany is always at the forefront. But as Trump, and Merkel without the theatrical element, have proven, hegemons make and break the rules and […]