An excellent overview of current political and economic situation in Britain and the strikes. 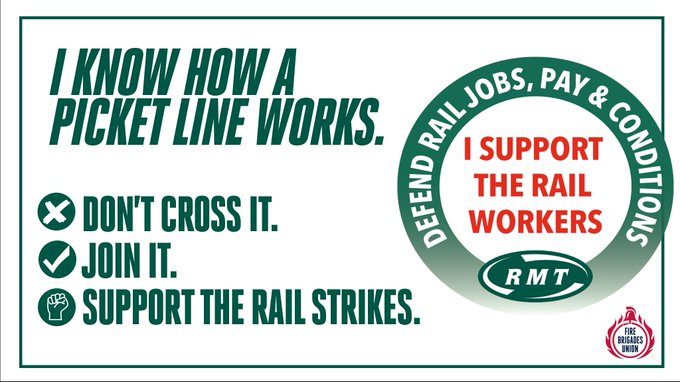 With inflation soaring well into double digits and a winter of hardship beckoning – where are our political establishment?

At Westminster, Johnson is demob happy – making the most of his paid holidays. The two candidates to replace him are offering no sense of leadership amid the chaos. Instead, they are courting Tory members, an affluent layer of the population detached from the reality of tens of millions, with complacent promises of tax cuts.

The Scottish Government is also conspicuously quiet. On the few occasions when First Minister Nicola Sturgeon has broken cover, it has been to make noises about Westminster responsibility and Tory fecklessness, without indicating meaningful action on her own government’s part.

A sharp contrast can be drawn between official political leadership and an insurgent strike movement – spearheaded by the RMT but now including numerous unions and industries, including some like Amazon which lack union organisation and have taken wildcat action. Workplace activity has also encouraged solidarity movements and initiatives attracting significant support – such as the ‘Enough is Enough’ campaign fronted by trade union leaders Dave Ward of the CWU and Mick Lynch of the RMT.

In circumstances like these, it’s easy to imagine that the political scene itself is being overwhelmed by forms of extra-parliamentary action well-placed to subvert the conventions of the establishment. It’s a socialist truism that forms of mass, direct, and principally working-class action are essential and generally superior to those forms of politics directed through official state channels.

But there is a danger of underestimating the state’s capacity to re-assert itself in the situation. Soon, a new government will be formed, and it is likely to act aggressively to put itself at the ahead of developments.

Liz Truss (the current Tory frontrunner) has held a firm line with party members that she will address the recession through liberal economic orthodoxies. No matter how firmly asserted, these claims are unlikely to survive contact with reality in the form of the senior civil service. She is likely already in talks with state managers and Tory party apparats about the need for significant state intervention to curb the impact of inflation on the economy (perhaps even Johnson’s idle administration is planning a parting shot).

This is necessitated by two separate but related class antagonisms. The first is between groups of capitalists. The giant energy monopolies are making enormous profits, but they are doing so at the expense of other fractions of capital. Capitalist states do not tolerate these kinds of imbalances indefinitely. When the operations of one fraction of capital endanger the profitability or stability of the wider economy, intervention by the state becomes increasingly likely.

Looming over this intra-capitalist dispute is the state’s relations with the wider population, and especially the working class. Strikes and broader public anger will be a warning to the governing elite. But so will the hit to household budgets. With inflation soaring into the double digits and predicted by at least one estimate to breach 18 percent, most workers are taking a big pay cut, and this will destroy demand in the economy – particularly for non-essential goods and services. Put simply, if you own (or work for) a small or medium business in retail, hospitality or tourism you should be very worried right now.

Some are resistant to the idea that the Tories will take meaningful action – depicting the party as in the thrall of a ‘disaster capitalist’ ethos that welcomes disruption. This is a misunderstanding of the operation of capitalist states at any time. It also forgets just how decisive the party has been in recent years on this front. It is only two and a half years since Johnson and Sunak launched a gigantic bout of money printing to finance support for businesses and workers.

It’s hard to predict precisely what the response will be this time around – it could be a mixture of payments to ‘deserving’ groups, or more direct impositions against the energy monopolies, like price controls or tax raids, or some other Whitehall concoction. This doesn’t mean the action taken will be sufficient, let alone just and certainly not redistributive. But if it fails to guarantee a baseline of stability in the economy and society, this will be the product of miscalculation on the part of the government – not design.

Intervention into the economy will likely be just one Tory prong. The other will be a move to isolate the unions and any wider opposition. Truss has already indicated that she will launch a fresh assault on union rights with urgency – claiming she will introduce minimum service levels (state sanctioned scabbing operations) in swathes of industries, and raise strike thresholds even higher.

The Tory party strategy may be to contrast the ‘national solidarity’ of their own package of support with the ‘selfishness’ and ‘opportunism’ of the unions. Workers will be pilloried in the press (as they already have been) as ‘Putin’s Stooges’, as the economic war in Europe intensifies, ramping-up energy prices. Simultaneously, striking workers will be offered below-inflation pay deals that will look increasingly attractive as inflation continues to surge.

These are not, it is true, the Tories of old – not the hard-bitten class fighters of the Thatcher era, schooled by years of defeat at the hands of a powerful trade union movement. Mistakes they make may be attributable to that fact. They are also internally divided after more than a dozen years of tumultuous rule. But they do wield powerful tools in the coming fight. Above all they have the state – a massive concentration of spending and coercive power.

They will wield it at the weak points in the emerging strike movement. These include the failure, so far, to mount cross-sector united industrial action, competition and friction between the unions (observable at an industrial level, and at the level of national campaigning where the CWU and Unite have launched separate operations), and the fact that whilst a small minority of workers are presently striking for pay, the vast majority of workers are taking a hit – most of them in un-unionised sectors.

The new movement inspired by attacks on living standards can protect itself from the coming assault by developing unity between different industries and unions, and then between organised workers and other groups of workers not in unions, or not concentrated in traditionally unionised industries. Finally, it will need to develop a political focus – national state and government level demands that transcend individual disputes.

The movement must not conform to the traditional bifurcations in public life – between ‘the economy’ and politics, between domestic affairs (over which we have a right to a say) and foreign affairs which are the preserve of the state. The economic war in Europe, the huge influence that has on the energy crisis and inflation, and the weaponization of the war against workers, means that the industrial movement cannot detach itself from the demand for a negotiated settlement to the war in Ukraine.

There are, in the history of capitalism, no simply ‘economic’ struggles. Class conflicts hinge on a variety of political questions: civic and legal rights, democracy, national questions, wars and all matters relating to the state. Our present juncture, too, will involve all these matters.

For three years now we have been building a European economic and political educational forum to tackle topics such as neo-liberalism, climate change, inequality, and the deterioration of democracy in Europe. We and our contributors […]

Tax Justice Network – Yes, Britain is closing its tax havens. But let’s not forget it created them in the first place

We still have a long journey ahead of us with regard to banning tax havens, but a step has been taken. This post is jointly authored by Anthea Lawson and John Christensen Tax justice campaigners […]

Josh Ryan-Collins – Should credit be guided?

Do not be intimidated by the language and graph. This article exposes why banks are serving society less and speculators and rentiers ever more. It is also not that difficult. Good read for the weekend. […]