Duroyan Fertl is a political analyst and a former Political Advisor for Sinn Féin and GUE/NGL in the European Parliament. His blog is Hintadupfing

You can read Part 1 here 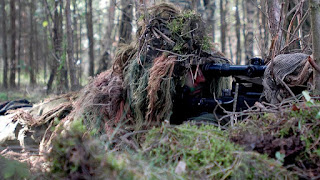 The Bundeswehr’s tolerance for the far-right also brought it into contact with the most notorious terror group in recent German history, the “National-Socialist Underground” (NSU) – a terror organisation responsible for multiple bombing attacks and bank robberies, 43 attempted killings and 10 murders, most of them of people of Turkish heritage, between 2000 and 2007. Twenty years ago, neo-Nazi extremist and key NSU supporter, André Eminger, had barely begun his military service when he reportedly told his supervisor: “I identify as a National Socialist.” It was hardly a shock – he wore a tattoo reading “Blut und Ehre” (“blood and honor”) – the Hitler Youth motto and name of a far-right group now banned in Germany. Despite his admission, however, Eminger continued unhindered in the military – including undergoing weapons training.

Extremism and the Deep State

The NSU had an even more sinister relationship with Germany’s intelligence services, especially the domestic intelligence agency BfV. Central members of the NSU network were informers on the BfV payroll, while an intelligence agent reporting on the far-right was even a witness at one of the killings. The BfV has also been criticised for actively obstructing investigations into the NSU’s activities. Shortly after the existence of the group became public in 2011, many BfV files relating to the NSU were destroyed – some after the investigation had begun. The BfV president Heinz Fromm resigned in disgrace, but any remaining files on the NSU have been redacted or remain inaccessible. During the trial, BfV agents and informants were only allowed to give limited testimony – or in some cases, none at all.

Fromm’s successor as BfV president, Hans-Georg Maaßen, also fell victim to controversy. During the 2018 Chemnitz protests, where angry right-wing mobs were filmed “hunting” for “foreign-looking” people, Maaßen claimed to have seen no evidence of the incidents – a spurious claim echoed only by the far-right AfD. Soon afterwards, it came to light that Maaßen had also passed sensitive information to AfD members. Facing calls for his resignation, Maaßen was initially granted a role in the Interior Ministry, but was placed on early retirement after using his farewell speech as BfV president to accuse “radical left-wing” forces in the German government of conspiring to remove him because he had criticised the government’s “naive” and “left-wing” security and migration policies.

Maaßen’s association with the AfD – which holds 89 seats in the German Bundestag and has now been elected into every German state parliament – is particularly concerning, not only because of the organisation’s connections to far-right groups, but also because of its own extremist politics. In September 2019, a German court ruled that Björn Höcke – co-leader of the party’s hard-line wing, Der Flügel – could legally be called a fascist as the description “rests on verifiable fact”. In March, the BfV classified Der Flügel as “a right-wing extremist endeavour against the free democratic basic order”, incompatible with Germany’s Constitution, and placed the group under close intelligence surveillance. Der Flügel was also mentioned in the BfV extremism report for the first time this year, and its 7,000 members – one fifth of the AfD total membership – make up a large part of the 32,000 extremists identified by the report. Despite officially complying with demands to dissolve earlier this year, there are suspicions Der Flügel continues to exist.

Attempts to monitor the far-right also face political hurdles. On June 1st, the chief of the state intelligence service in Saxony was replaced after refusing an order from new conservative state Prime Minister, Dirk-Martin Christian, to delete data collected on AfD politicians. The demand – unique to Saxony – is all the more troubling as the Saxony branch of the AfD is considered one of the most extreme. The AfD remains under intelligence surveillance throughout Germany, and other German states have received legal advice supporting ongoing data collection. In fact, despite the AfD’s associations with far-right and neo-Nazi politics, Germany’s governing CDU remains divided over whether to work with the party. Currently in a federal “grand coalition” government with the centre-left SPD, the conservative CDU is suffering an identity crisis, with many former voters flocking to the AfD. Some CDU members are therefore keen to end the “grand coalition” and return the party to a more clearly right-wing position. As a result, they are controversially urging an end to the “cordon sanitaire” that other parties have placed around working with the extremist AfD.

Far-right attacks on the rise

Meanwhile, the numbers of violent far-right attacks in Germany continue to rise. German Interior Ministry figures, released in April this year, recorded 986 acts of attempted or perpetrated far-right violence in 2019, over 600 of them targeted at holders of political office, and revelations of the Nordkreuz “kill list” in 2019 coincided with the murder of conservative CDU politician Walter Lübcke in his home by a man with known links to the far-right. Last October, a 27-year-old neo-Nazi with military training attacked a synagogue in Halle on the Jewish holiday of Yom Kippur, resulting in two deaths. In 2018, police arrested members of the right-wing terrorist organisation “Revolution Chemnitz”; and eight members of the neo-Nazi terrorist Freital Group from near Dresden were convicted of terrorism-related crimes, including multiple attacks on refugee shelters. Dresden has now declared a “Nazi emergency”. In February this year – twelve members of a far-right terror cell “Group S” were arrested while preparing attacks on mosques in ten German states. The same month, a far-right gunman killed nine people of immigrant background at a kebab bar and cafe in the city of Hanau, near Frankfurt. While the attacker has not been linked with any group, he left behind a manifesto entitled “Message to the entire German people”, in which he expressed his racist, anti-Semitic, anti-Islam and misogynistic views.

A Europol report from last September warned that far-right groups across the European Union were actively recruiting from the police and military to increase their capacity for violence, and in June, Focus magazine revealed that German neo-Nazis – including members of the National Party of Germany (NPD) and The Third Way – have been travelling to Russia to carry out paramilitary training in camps run by the white-supremacist Russian Imperial Movement. On July 3, magazine Der Spiegel reported that a reservist from Lower Saxony had been found with a list of the telephone numbers and private addresses of 17 top politicians and celebrities, including federal Ministers, state Prime Ministers, and current and former leaders of the Greens and Die Linke. The reservist was a participant in two right-wing extremist chat groups, and a similar Facebook chat group of reservists called “Zuflucht” (“Refuge”) has also been exposed, with participants discussing private armament and fighting a possible “racial war”.

On June 27th, a district councillor for Die Linke in Bavaria, Stefanie Kirchner, was attacked from behind by a man with a knife. The attacker tried to strangle her, and hurled anti-left abuse. Kirchner was able to free herself, but the attacker escaped. Several days later, on July 3rd, state MP for Die Linke in Hesse, Janine Wissler, revealed that she had received multiple death threats in February, targeting both her and her family, signed “NSU 2.0”. Only days after making the revelations public, she received further death threats. According to evidence obtained by the Frankfurter Rundschau, it looks likely the death threats against Wissler also originated from within the police force. The death threats bear strong similarities to those sent to lawyer Seda Basay-Yildiz, who had represented victims’ families in the NSU trial, which bore the same neo-Nazi sign-off. In both cases, the threats included sensitive personal information taken from police databases, and in the case of Basay-Yildiz, a chat group of officials with right-wing content was discovered, and several civil servants lost their jobs, but no one was charged.

The dangers of “business as usual”

As the spate of far-right violence has grown – alongside the political growth of the AfD, whose rhetoric has further emboldened many extremists – so has the political pressure on the government and authorities to stop turning a blind eye, and finally address the issue. Promising a strengthened security response, German Interior Minister Horst Seehofer banned the neo-Nazi group Nordadler (“Northern Eagles”) on June 5th, following raids across the country. This was the third far-right group to be banned in Germany this year, following Combat 18 in January and the United German Peoples and Tribes group in March. The numbers of armed extremists remain relatively small, however – despite the plots of various “prepper” networks there is certainly no real threat of a mass insurgency or military coup against the state.

Nonetheless, Germany’s problem with the far-right runs long and deep – both inside and outside the state, and within the very state agencies meant to monitor the threat. Konstantin von Notz, deputy president of the Bundestag’s intelligence oversight committee, has described the situation in the Bundeswehr as a “structural problem”, and the latest BfV report on extremism in Germany only underscores how serious the challenge of far-right extremism has become. The existence of extremist networks with connections to politicians, the military and intelligence agencies also poses a unique series of challenges as we head into a new economic crisis, and the turmoil that will almost inevitably follow. Should the likes of the AfD manage to exploit the social impact of the downturn, their success will encourage extremists to commit further acts of fascist violence. Worse yet, it raises the frightening prospect of the far-right entering government in Germany for the first time since World War Two.

As a German-led EU begins the task of papering over the cracks of the latest economic crisis while preparing a new round of brutal austerity, it is incumbent on political forces of the left – and all forces that cherish democracy and social justice – to present such an alternative to the neoliberal model that is impoverishing and excluding working class communities across the continent. Such an alternative – denying oxygen to the far-right, empowering working class communities, and instilling sustainability at the centre of our social model – is urgent and long overdue. If we fail to build a new world of solidarity out of this deepening crisis, there are others waiting in the shadows to take their own, darker, turn

If you have bothered to follow this event, it has, as predicted, become a veritable show trial. The judges are all political appointees of the right. The result has been clear since the beginning. The […]

A lot of flying by academics simply has to do with a sense of entitlement, but isn’t that true of most people who fly? Time for a rethink. Cross-posted from Phys Org The large, international […]