The promise of green growth turns out to have been based more on wishful thinking than on evidence. In the years since the Rio conference, three major empirical studies have arrived at the same rather troubling conclusion: Even under the best conditions, absolute decoupling of GDP from resource use is not possible on a global scale. 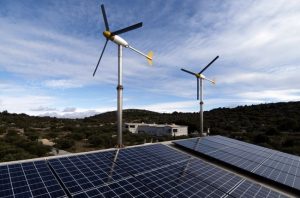 Warnings about ecological breakdown have become ubiquitous. Over the past few years, major newspapers, including the Guardian and the New York Times, have carried alarming stories on soil depletion, deforestation, and the collapse of fish stocks and insect populations. These crises are being driven by global economic growth, and its accompanying consumption, which is destroying the Earth’s biosphere and blowing past key planetary boundaries that scientists say must be respected to avoid triggering collapse.

Many policymakers have responded by pushing for what has come to be called “green growth.” All we need to do, they argue, is invest in more efficient technology and introduce the right incentives, and we’ll be able to keep growing while simultaneously reducing our impact on the natural world, which is already at an unsustainable level. In technical terms, the goal is to achieve “absolute decoupling” of GDP from the total use of natural resources, according to the U.N. definition.

It sounds like an elegant solution to an otherwise catastrophic problem. There’s just one hitch: New evidence suggests that green growth isn’t the panacea everyone has been hoping for. In fact, it isn’t even possible.

But the promise of green growth turns out to have been based more on wishful thinking than on evidence. In the years since the Rio conference, three major empirical studies have arrived at the same rather troubling conclusion: Even under the best conditions, absolute decoupling of GDP from resource use is not possible on a global scale.

The team then reran the model to see what would happen if every nation on Earth immediately adopted best practice in efficient resource use (an extremely optimistic assumption). The results improved; resource consumption would hit only 93 billion metric tons by 2050. But that is still a lot more than we’re consuming today. Burning through all those resources could hardly be described as absolute decoupling or green growth.

In 2016, a second team of scientists tested a different premise: one in which the world’s nations all agreed to go above and beyond existing best practice. In their best-case scenario, the researchers assumed a tax that would raise the global price of carbon from $50 to $236 per metric ton and imagined technological innovations that would double the efficiency with which we use resources. The results were almost exactly the same as in Dittrich’s study. Under these conditions, if the global economy kept growing by 3 percent each year, we’d still hit about 95 billion metric tons of resource use by 2050. Bottom line: no absolute decoupling.

Finally, last year the U.N. Environment Program—once one of the main cheerleaders of green growth theory—weighed in on the debate. It tested a scenario with carbon priced at a whopping $573 per metric ton, slapped on a resource extraction tax, and assumed rapid technological innovation spurred by strong government support. The result? We hit 132 billion metric tons by 2050. This finding is worse than those of the two previous studies because the researchers accounted for the “rebound effect,” whereby improvements in resource efficiency drive down prices and cause demand to rise—thus canceling out some of the gains.

Study after study shows the same thing. Scientists are beginning to realize that there are physical limits to how efficiently we can use resources. Sure, we might be able to produce cars and iPhones and skyscrapers more efficiently, but we can’t produce them out of thin air. We might shift the economy to services such as education and yoga, but even universities and workout studios require material inputs.

Once we reach the limits of efficiency, pursuing any degree of economic growth drives resource use back up.

These problems throw the entire concept of green growth into doubt and necessitate some radical rethinking. Remember that each of the three studies used highly optimistic assumptions. We are nowhere near imposing a global carbon tax today, much less one of nearly $600 per metric ton, and resource efficiency is currently getting worse, not better. Yet the studies suggest that even if we do everything right, decoupling economic growth with resource use will remain elusive and our environmental problems will continue to worsen.

Preventing that outcome will require a whole new paradigm. High taxes and technological innovation will help, but they’re not going to be enough. The only realistic shot humanity has at averting ecological collapse is to impose hard caps on resource use, as the economist Daniel O’Neill recently proposed. Such caps, enforced by national governments or by international treaties, could ensure that we do not extract more from the land and the seas than the Earth can safely regenerate. We could also ditch GDP as an indicator of economic success and adopt a more balanced measure like the genuine progress indicator (GPI), which accounts for pollution and natural asset depletion. Using GPI would help us maximize socially good outcomes while minimizing ecologically bad ones.

But there’s no escaping the obvious conclusion. Ultimately, bringing our civilization back within planetary boundaries is going to require that we liberate ourselves from our dependence on economic growth—starting with rich nations. This might sound scarier than it really is. Ending growth doesn’t mean shutting down economic activity—it simply means that next year we can’t produce and consume more than we are doing this year. It might also mean shrinking certain sectors that are particularly damaging to our ecology and that are unnecessary for human flourishing, such as advertising, commuting, and single-use products.

But ending growth doesn’t mean that living standards need to take a hit. Our planet provides more than enough for all of us; the problem is that its resources are not equally distributed. We can improve people’s lives right now simply by sharing what we already have more fairly, rather than plundering the Earth for more. Maybe this means better public services. Maybe it means basic income. Maybe it means a shorter working week that allows us to scale down production while still delivering full employment. Policies such as these—and countless others—will be crucial to not only surviving the 21st century but also flourishing in it.

*This article and image originally appeared in Foreign Policy magazine in 2018.

Michael Roberts – The scissors of slump

According to Michael Roberts things are going from bad to worse for the world economy. Michael Roberts is an Economist in the City of London and a prolific blogger Cross-posted from Michael’s Blog Photo: pixabay.com/nl/vectorel-schaar-kleermaker-schaar-2245884 Last […]

Thomas Klikauer, Catherine Link – The Chance of Truth Surviving the Onslaught of Power Is Very Slim

Even before the timely political demise of Donald Trump and the unfortunate persistence of British prime minister Boris Johnson, the issue of lying and liars has been hotly debated. Thomas Klikauer teaches MBAs at the […]