Developing countries face a double whammy, the health impact of the virus and their inability to pump out central bank money. Industrialised countries must come to the rescue, for the benefit of all 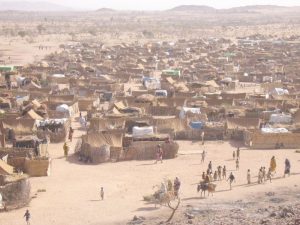 The global pandemic is sparing almost no one. Rapid and rigorous aid must urgently be provided to developing countries. This is feasible if the industrialised countries throw their economic dogmas overboard as soon as possible.

The corona crisis is becoming a very special test for conventional economic doctrines. This applies to Europe with its (German) doctrine that the central bank must under no circumstances finance state budget deficits. When you see German politicians and their close economists tiptoeing like cats around hot porridge, you get a sense of the dogmatic explosiveness of the subject, which silences a room as soon as it is mentioned.

But dogmatic taboos have even more serious consequences for developing countries. For most of them, combating the crisis is much more difficult, since the amount of aid needed is greater and the resources available to them on their own are less than in the industrialised countries: there are no state institutions that function in a comparable way and can cushion a lockdown. In addition, the health care available to most people on earth is much poorer, while they often live much closer together – both factors that favour the spread of the virus and its often fatal consequences. At the same time, the political and monetary systems are far from as stable as in the industrialised countries. In view of the potential for suffering and damage that could result if economic policy in these countries does not respond appropriately, it is unavoidable for the industrialised countries, in their own interests, to provide rapid and large-scale assistance to these countries.

Capital flight can be absorbed

The first thing that happened, when the crisis broke, was capital flight. In one of the first papers on the situation of developing countries in the corona crisis, UNCTAD provides impressive evidence of how quickly and massively Western “capital providers” have absconded. After only thirty days, the net outflow of capital from all developing countries together was far greater than in previous crises, including the financial crisis of 2008/2009. However, this is less dramatic than it seems: the bulk of the money was so-called “portfolio investment”, which is just a euphemism for extremely short-term and mostly speculative capital invested in an attempt to make profits in the form of shares and bonds and by exploiting currency fluctuations.

Central banks must be able to act

For Europe and the US, most observers are now aware that fiscal policy can only cushion the shock if monetary policy supports fiscal policy with all the means at its disposal. In essence, the bulk of the financial resources that states must have at their disposal in this crisis comes directly or indirectly from their central banks, i.e. it is created out of nothing. The role of central banks is to put a stop to speculators in the bond markets. In doing so, they enforce their low interest-rate target against any market pressure, thereby removing any basis for speculation against their states. In the euro zone too precisely this tactic must be applied to all countries – which unfortunately is not yet understood in Germany or is systematically blocked for dogmatic reasons.

This simple solution is not available to developing countries, which have their own currencies but whose exchange rates are very much determined by the financial markets. With large fiscal aid programmes supported by money, there is a risk that the currencies will continue to plummet because the “markets” expect (and speculate on) that even the low exchange rates now achieved will not be maintained in the course of this crisis.

But developing countries need US dollars because they are indebted in dollars (private and public) and have to service the debt and/or because their current account deficits force them to borrow US dollars on the capital markets for many essential goods including medical equipment. However, if their currency is under strong devaluation pressure, they can only prevent a devaluation spiral of their currency (even with high but naturally finite reserves of US dollars) by significantly raising domestic interest rates. But that is exactly the opposite of what their economy can cope with in this crisis. As a result, many of the poorer countries are experiencing a currency crisis in addition to the prescribed standstill in economic activity. Attaching the label “global debt crisis” to this constellation is of little help because it threatens to discredit the urgently needed instrument of debt.

There is a simple way out of the dilemma between interest and exchange rates, which is absolutely obvious if one disregards conventional economic dogmas. In order to give the developing countries the monetary freedom that is vital in this crisis – which is almost a matter of course for large industrialised countries – we must give the developing countries an exchange rate guarantee for the period of time needed to combat the corona shock, let us say for the next twelve months. Their currencies should continue to be traded, but should not fall below a certain level against the US dollar or the euro.

This guarantee can only come from Western countries (primarily the USA), because only the firepower of their central banks will convince financial market players of the credibility of the guarantee. Indeed, they know that they can never win against the central banks of countries whose currencies are crucial for the functioning of the global economy and which are therefore automatically under appreciation pressure in a crisis like the current one. If the Western central banks are unanimous in their support for this course, they will hardly ever have to intervene on the markets to fix the fixed exchange rates. It should therefore be decided immediately at the G-20 level that there should be a universal 12-month guarantee for all exchange rates that applied on a previous reference date (around 1 April). The cut-off date must be in the past so that speculative transactions cannot be conducted in anticipation of the guarantee. It must be accepted that such a date and with it the exchange rates to be guaranteed are somewhat arbitrary.

It is precisely the wrong way to go about it that the USA, via the Federal Reserve, should, as has already happened, grant individual countries close to them swaps, i.e. the possibility of borrowing a certain amount in US dollars. This is not appropriate in view of the dramatic nature of the situation and, on top of that, it leads to additional political tensions.

Under exchange rate protection, almost every country in the world can, with its own central banks, first bring interest rates down to a reasonably low level and then, with a combination of monetary and fiscal policy, ensure that those in the country who need support most urgently are supported. Direct aid in US dollars should be provided for those countries whose economies are dollarised, as in the case of Ecuador and Panama. The euro-zone countries can also participate directly in this action for those countries which prefer to peg their currency to the euro. Since it is not to be expected that the exchange rate of the euro against the US dollar will change significantly, a European guarantee is almost as good as an American one.

The special obligation of countries with current account surpluses

In this global crisis, too, it is once again apparent that countries with current account deficits are in a worse position from the outset if private capital flows suddenly reverse, for whatever reason. Asia, for example, is less hardly affected by the problems described here because most countries there have current account surpluses and their currencies are therefore under less pressure. The vulnerability of deficit countries creates special obligations for surplus countries. They must be in the front line to ensure that deficit countries are not disadvantaged in the fight against the pandemic.

This applies to the euro-zone countries among themselves, but also on a global scale. Since not all countries in the world can have current account surpluses, an attitude among surplus countries such as “What can I do about the fact that the others were not as industrious as myself?” is arrogant and stupid. It is astonishing that in Germany even some advocates of European solidarity refuse to acknowledge the indissoluble link between the situation of surplus and deficit countries.

There is no doubt that the temporary fixing of exchange rates is only a necessary, but not sufficient, condition for a rapid overcoming of the corona shock in the developing and emerging countries. Many other aid measures, such as the supply of medical equipment, must be added. However, if monetary chaos now breaks out and interest rates rise in countries where, even in normal times, many people struggle daily for survival, the damage caused by the economic standstill will be irreparable for decades.

Pay strike ran for 18 days in December, with pickets re-starting outside McDonald’s restaurants on 10 January BRAVE NEW EUROPE has made a further donation to the IWGB Strike Hardship Fund. Let us all show […]