A Green New Deal is not difficult to finance. The  European political elite simply do not want one, instead creating a Brown Deal giving billions of public money to corporations involved in fossil fuels, cars, airlines, airports, tourism, etc 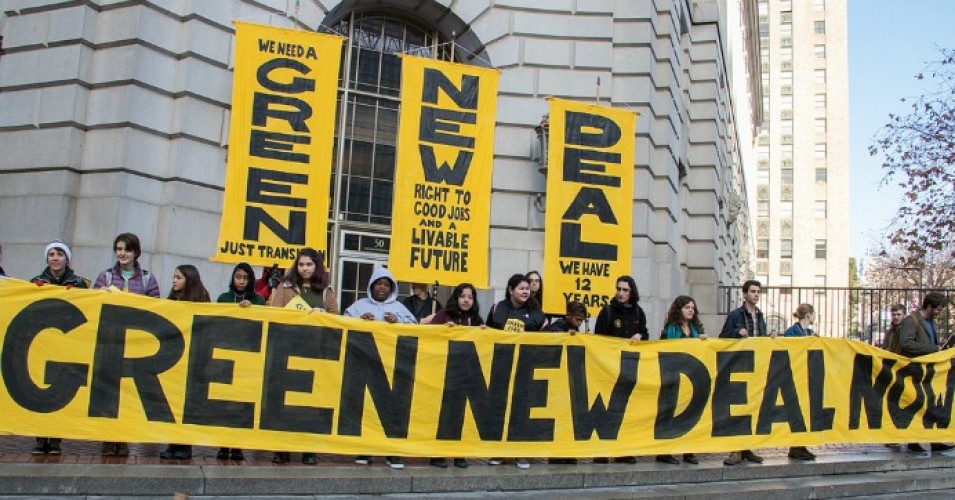 I’ve tweeted more about quantitative easing than I really thought to be decent of late. However the questions still keep coming, so here is another QE thread, on the use of QE funds and (especially) the link to the Green New Deal….

The question I have been asked is does it matter what QE money is spent on, and the honest answer is ‘it’s complicated’. But, maybe not so so complicated if it’s understand that QE came in three stages, each of which is quite different.

Stage 1 QE lasted from 2009 until 2016, when the last round of this stage took place in the UK. The aim at this stage was simple. As always, new money was created by the Bank of England, and mainly government bonds (gilts) were bought. That’s what QE does, in essence.

Stage 1 QE had the aim of removing gilts from the market. The idea was that money would go as a result go into riskier assets, and new investment. It didn’t. It went into speculation. But interest rates were kept low. And banks got new money, and that protected them from failure.

In Stage 1 QE the government also in effect got funds to cover its deficit. But to be clear, QE did not fund the government’s spending in this period. That was never the intention, and never what happened. Stage 1 (and 2) QE moped up the debt that spending had already created.

That QE only mops up debt is not surprising. As modern monetary theory makes clear, all government spending starts with money creation. And then the overdraft this, in effect, creates is cleared by tax receipts or debt. But the debt never comes first. So it never funds the spend.

Stage 2 QE emerged in 2020. Unlike Stage 1 the aim was not to redirect where the City put their money. The aim was to make sure that financial markets were not going to be overwhelmed by having to buy the large number of new gilts that would otherwise be on sale. It’s worked.

Stage 2 QE has other aims as well. Keeping interest rates low was still necessary. And protecting banks from stress in financial turmoil remained a priority, and key in March 2020. But primarily this was a debt funding exercise. And the spend still came first.

I’m not sure I can stress this enough: Stages 1 and 2 QE do not fund government spending. The government can do that any time it wants. It has its own bank. But because it thinks it has to clear its overdraft with the Bank of England it has to issue debt.

The only reason for Stages 1 and 2 QE is debt management, and not to fund spending. Stage 1 QE aimed to make government debt less attractive by lowering interest rates, to supposedly force money elsewhere. Stage 2 provides a buyer for the debt the market may not want right now.

It is only what I call Stage 3 QE that might change the use of QE money. I developed this idea in 2010. It was called Green Quantitative Easing back then. Jeremy Corbyn called it People’s QE. John McDonnell,was scared of it. It’s quite different to Stage 1 & 2 QE.

In Stage 3 QE a government owned investment bank seeks to secure funding to transform an economy. The aim is to deliver a Green New Deal, and everything that goes with it. I stress this could be done by conventional government spending. Plus Stage 2 QE. But Stage 3 QE is better.

Stage 3 is about much more than QE though. It recognises that vast amounts of saving is wasted right now. The stock market and land speculation are just Ponzi schemes that don’t deliver added value new jobs. Cash sits uselessly in bank accounts. Savings need to work.

Stage 3 QE works alongside a transformation of savings. State subsidies to savings – that drive the Ponzi scheme arrangements we have – need to change. So pensions funds, to get tax relief, must save 25% of their new contributions in investments that create new green employment.

The Stage 3 QE job creating investments in green jobs can be in the private sector, of course. They need not be in the UK. After all, this is a global issue. But the point is the only real useful long term investments we have now are in the green economy – so it needs to happen.

Stage 3 QE also requires that ISA savings be changed. £70bn a year goes into ISAs. Some is reinvestment, but it’s still a massive sum. And all that money needs to go into guaranteed green savings bonds issued by a National Investment Bank where it could fund the Green New Deal.

Do what I have said to reform tax on savings and all the money required to fund a Green New Deal may be found. We may not need Stage 3 QE for this purpose at all. But what if the need for reform is bigger than the capacity of savings to fund? Then Stage 3 QE can kick in.

To make Stage 3 QE work the National Investment Bank issues bonds and then the Bak of England acquires them in the usual QE way — effectively making money available for green investment. Now, for the first time, QE might be linked to an actual spend.

The link between the spend by the National Investment Bank and QE is always going to be at a distance though. The Bank of England is still playing its role of mopping up debt in this Stage 3 approach to QE. It does not control the spend. It does not manage it. It just buys debt.

In conclusion, QE does not fund or direct spending. It is a way of managing debt. That’s it. But we do need ways of managing debt right now. And QE – which meets international requirements and lets the Bank of England indirectly fund the government – is critical right now.

Jonathan Cook – Immunity passports: Does social solidarity only count when it gets us back to the pub?

A good take on an extremely difficult question Jonathan Cook is an award-winning British journalist based in Nazareth, Israel, since 2001 Cross-posted from Jonathan Cook’s website To read the tweets in this article in their […]

Austerity Britain is a series of short films challenging the claim that “we’re all in this together” and exposing the ‘culture of cuts’ as a counter-productive ideological obsession. Ryan Chapman is a documentary filmmaker and […]