The UK University Strike may have been deferred, but it produced many successes and raised an awareness of the assault on higher education in Britain. Awareness of a problem is the beginning of a confrontational process, which can lead to real change.

Steve Tombs is Professor of Criminology at The Open University 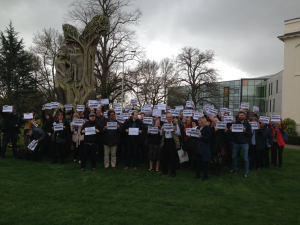 Arts and Social Sciences staff gather on campus on 29th March to tell Peter Horrocks, “What I do is teaching”

On Friday 13th April, Peter Horrocks, the Vice-Chancellor of The Open University, the UK’s biggest distance learner provider, set up by the social democratic Labour Government in 1969, literally to make access to higher education open to all, announced his resignation “with immediate effect”. His leaving was widely – and accurately – reported as the consequence of a “staff revolt”.

Less than 3 weeks previously, on 23rd March, a live, streamed and subsequently internally web-hosted broadcast discussion between Horrocks and the OU Student Association had prompted a series of unprecedented events which led to that resignation. In that discussion, Peter Horrocks displayed a remarkable ignorance of, indeed contempt for, what academics on campus at the OU actually did:

“the people who work here should be bloody well teaching.  They should be teaching directly. It’s ridiculous that they are thought, they are spoken about as though they’re teaching, when they’re writing.  That’s not teaching.”

His words were the spark for “staff to rise up”. But they were only the latest in a long line of gaffes, regressive policy turns and a wilful lack of strategic nous that had come to characterise Horrocks’ three years in charge of the Open University. It looked very much like his disastrous tenure at the helm of the BBC’s World Service – Horrocks is a career journalist, but why let that prevent him running a University? – was being replayed in a horror show akin to a slow motion car crash.

Having overseen the closure of almost all of the University’s regional centres in England and so effecting a massive centralisation, then forcing through a disastrous new tuition policy, leaks then confirmed a massive round of planned cuts (£100m from an operating budget of £420m) and redundancies (up to 300 full-time staff in the first year) which would see a culling of courses offered and an attack on the research base which lends the necessary vibrancy to any teaching and learning. In fact, on the eve of a national strike against pensions theft, he used the scale of the ‘restructuring’ to justify his £360,000 pa salary (driving through unprecedented redundancies meant paying for “an appropriate leader”!). His arrogant myopia had become a threat to a once proud institution and the tens of thousands of students to whom it should represent a unique, life-changing opportunity.

A few days after his ‘teachers not teaching’ gaffe, Horrocks issued an apology, emailed via intermediaries, which was so mealy mouthed and so grudging that the University went into meltdown. Most ‘normal’ activity was suspended as, first, academic staff, then various groups of support staff and, finally, students and alumni mobilised themselves. It was incredible.

Timing was key. The OU’s branch of the University and Colleges Union, the UCU, were to be important in this tidal wave of protest. But it was only part, perhaps not at the forefront, of it. In fact my sense was of a wider workforce emboldened by the incredible wave of national action – which was undertaken by the UCU across the country – that had recently closed half of Britain Universities for 14 days in a four week period of the most intense industrial action ever seen in the sector. Finally this seemed to signal that the relentless managerialist, marketising, hollowing-out and neo-liberalisation of our Universities could be opposed, even as Horrocks at the OU sought to put the final nail in the coffin of the Jewel-in-the-Crown of widening participation in UK HE. A  group of academics had finally had enough. It was a watershed: liberating, exhilarating, exhausting; a constituency much broader than the ‘usual suspects’ – a somewhat conservative and heterogeneous bunch of people associated with the University – were demonstrating the sentiment which those of us who had stood on UCU picket lines day in, day out just two weeks or so before had felt, lived, breathed. The message was clear: we are not having it any more.

Horrocks’ apology for his crass remarks about ‘teachers not teaching’ only fuelled the flames – his half-hearted back-peddling led to ‘No Confidence’ votes and calls to resign with immediate effect being articulated orally and by votes in a plethora of meetings, in mass letter writing and via petitions at all levels and in every quarter of the University – at every level of senior, middle and lower level management, by all groups of staff (academic and non-academic) across all Faculties, functions, countries, as well as by students and alumni. These voices were raised in their tens of thousands. He was openly challenged, contradicted and ridiculed, not least on various social media platforms, while other forms of e-comms became integral to our organisation – as they had been during the strike – as WhatsApp, Twitter, Facebook and Youtube became sites and means of organisation and resistance.

With no little irony, on the very day that the Open University’s Voluntary Severance scheme was formally rolled out – the first, velvet glove attempt to secure some 300 redundancies – Horrocks was hauled before an undemocratic University Council which would determine his future. With little option, and with the business sense of corporate men and women, the Council refused to back him. Days later, Horrocks was gone.

On the same day that Horrocks walked, it was announced that the UCU membership had voted 2:1 to accept new proposals from employers over the future determination of our pensions scheme. In my view, calling off industrial action at this point is an error, when the remarkable wave of strike action could have been maintained if not extended to disrupt the end-of-year exams season and even more firmly push the employers onto the back-foot.  But the workforce in the sector has been mobilised and perhaps radicalised, and we end the action stronger than when we began it. And in the successful struggle against Horrocks at The Open University, in that small victory against one man, a marker may have been laid. Perhaps, just perhaps, this remarkable sequence of events might prove a watershed in the struggle to stem the onslaught of managerialism and neo-liberalisation that has swept through our Universities through the last 30 years. And those who manage across the sector might sit up in the knowledge that they are not above being called to account.

As governments struggle to reimpose austerity we shall be confronted with some noteworthy intellectual contortions, as here in Britain Jo Michell is associate professor in economics. Bristol Business School, UWE Cross-posted from Critical Macro Finance […]

A fascinating read. Relevant for leftists in Europe who are realising that their political parties are neo-liberals in the service of the corrupt, anti-democratic oligarchy. Just look at Labour in the UK, the Social Democrats […]