Proposition 22 in California makes Trump seem an avid democrat. This was plutocracy in action. 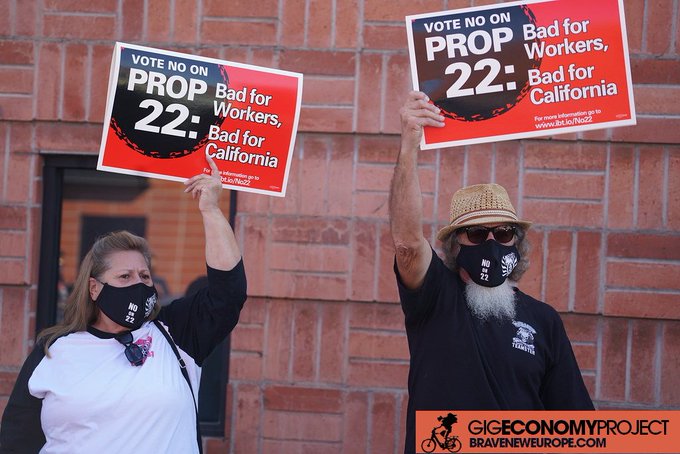 While all eyes have been on the US Presidential election, a historic referendum in California was also held on 3 November.

California voted for Proposition 22, with about 57 per cent in favour. Prop 22 excludes app-based workers from labour laws in the state, meaning they don’t have to be classified as employees, and therefore do not receive a minimum wage, sick leave, healthcare, social protections, and more (click here for more detail on Prop 22).

‘Yes to Prop 22’ smashed funding records in California, with Uber, Lyft and other gig economy companies throwing a combined $224.3 million at the campaign. They also threatened job losses, price hikes and potentially leaving the state altogether if Prop 22 fell and they had to comply with state ‘AB5’ labour laws passed in January.

Up against them was a grassroots campaign of workers and volunteers, which had just one-tenth of the funding of it’s big corporate rivals. One of those was Jerome Gage, a Lyft driver in California and member of the Mobile Workers Alliance.

The Gig Economy Project spoke to Gage about the campaign, what the consequences of the passing of Prop 22 might be, and why he remains optimistic about the struggle for workers’ rights.

Q) Tell us about what the campaign was like as a driver.

JG: It felt like a David versus Goliath moment. We were going up against multiple well-funded, billion-dollar company, trying to take our rights away.

On the campaign trail we saw that we were being completely overwhelmed in terms of Ads. You couldn’t go on a social media site without seeing an Ad for Prop22. You get constant text messages. Newspapers, radio; so much misinformation being sent out there. Every commercial we put out, they put out 15. For every talkshow we were on to explain our message, they were on 15 other talkshows.

And the one that really annoyed me the most was the in-app notifications about Prop22. I’m a driver so whenever I pick up a passenger it really annoyed me to know that right before the passenger got into the car there was a notification suggesting that I support Prop22. It was like compelled speech. They were suggesting that their app speaks for drivers, when they don’t.

If you listen to drivers you are going to get a consistent story of having to work long hours because there’s no minimum wage, having to work while sick, but these are the drivers they don’t want you to know about. They paint a picture of drivers like we are just trying to buy a new fridge, or just trying to get some money to prepare for the holidays. In reality a lot of us are full-time workers and this is our only source of income and therefore it’s incredibly important to have these protections in place.

Their tactics to win just involved fear. They were suggesting drivers were going to lose their jobs, and it’s so synonymous with the same rhetoric used in the early 1900s when people started to unionise. They were saying: ‘We’ll have to pay workers more so we’ll have to lay people off’. It’s the same rhetoric that has been used over and over again.

But we felt the energy on the ground. It was a grassroots effort; a lot of volunteers, and a lot of drivers. We are surprised we did as well as we did. The number of people who understood the importance of workers’ rights and dignity in a job – it really resonated with people, and that’s why despite spending ten times as much as us they were still not able to totally destroy our campaign.

Going into the vote, it was a toss-up in the polls. So it was kind of a good feeling to know that on the eve of the election, they did not sleep well the night before.

Q) Uber are talking about now trying to extend Proposition 22 to other states, potentially across the whole of the United States.

JG: They can’t spend $200 million in every state to beat us. They’re a very, very rich company, but you can’t do that in every state.

The fight we were able to put up here in California – they didn’t completely trample over us – it shows that we have a winning message, and if we were playing on a level playing field, we would win.

So if they try to do it in other states they’ll have to spend the same again, because we can always organise as it’s incredibly important to a lot of people and it resonates with the grassroots movement. If they want to try this same tactic in every state, they can do it and we’ll win. There’s 50 states: $200 million x 50 is $10 billion. I’d like to see them try.

Q) What positives can you take from the campaign?

JG: This was my first real time being really really engaged in the politics of my area, and I was genuinely surprised at the level of enthusiasm, not just of drivers.

We did a lot of phone banking, a lot of texting, and the people I was able to talk to, they understood the movement. It clicked with them right away. I explained the basics, and they filled in the rest. For a lot of people it’s really really simple: it comes down to big companies paying a lot of money to write their own laws. That’s what it comes down to. I think everyone really understands that.

So I think they won’t be able to repeat the success ever again in any other state because we had a winning message, and we demonstrated that with our turnout on incredibly low funding and the number of volunteers we were able to bring in.

Drivers can win if they organise, and I think that’s what I learned from this and a lot of people learned from this. I don’t think this is the end at all. It’s going to be a long drawn out thing, and I want to maintain enthusiasm and optimism for everyone involved because I think it’s a fight we can win.

Q) You and other drivers will now live with the ramifications of Prop 22. What sort of effect will it have?

JG: I mean, just take the one issue of not having sick leave. We’re entering winter and illness comes with it. Every year around Christmas I always get sick and it’s so annoying because instead of being able to socialise with my family I’m coughing and sneezing, but this year in particular there is a dark cloud because of Coronavirus. So I know I’m going to get sick again, and I’m not going to know if it’s because of Coronavirus or just the seasonal flu.

So I’m scared to be honest, because I’m not going to have the sick leave, I’m going to really have to take a hard cut in my earnings, and I don’t have any other out. I don’t know what I’m going to do because there are no basic protections; there’s no floor for us. Prop 22 just legalised their predatory behaviour.

Q) What lessons can workers in Europe take from the experience of the Prop 22 campaign?

It’s going to be be a political fight. And there’s a couple of ways to win: you can have a winning message, or you can cheat. And Uber and Lyft are the ones who can cheat!

So it’s important to have a winning message, it’s important to understand what kind of legislation will protect the working class. The working class are most of the voters, we are the ones that actually create the economy. So don’t wait for these companies to act – be first. Go out, create the movement, and create a momentum that can’t be stopped.

Swedish and Danish trade unions have been up in arms about a minimum wage proposal making its way through the corridors of Brussels and Strasbourg for a while. They have now enlisted the help of […]

Normally we do not simultaneously have two articles from the same author on our hompage, but Michael Roberts is doing such an excellent job of covering Davos that we have made an exception. Michael Roberts […]

The financial elite has bought European liberal-democratic parties, but are these still relevant or simply an illusion of media? Claudio Salone was a school principal and teacher for ancient literature in Rome The ‘Perfect Storm’ […]