The Left Party’s (Die Linke)s dismal results in the German elections eliminate any chance of a red-green-red (R2G) coalition government, much to the relief of the leaders of both the SPD Social Democrats and the Greens. 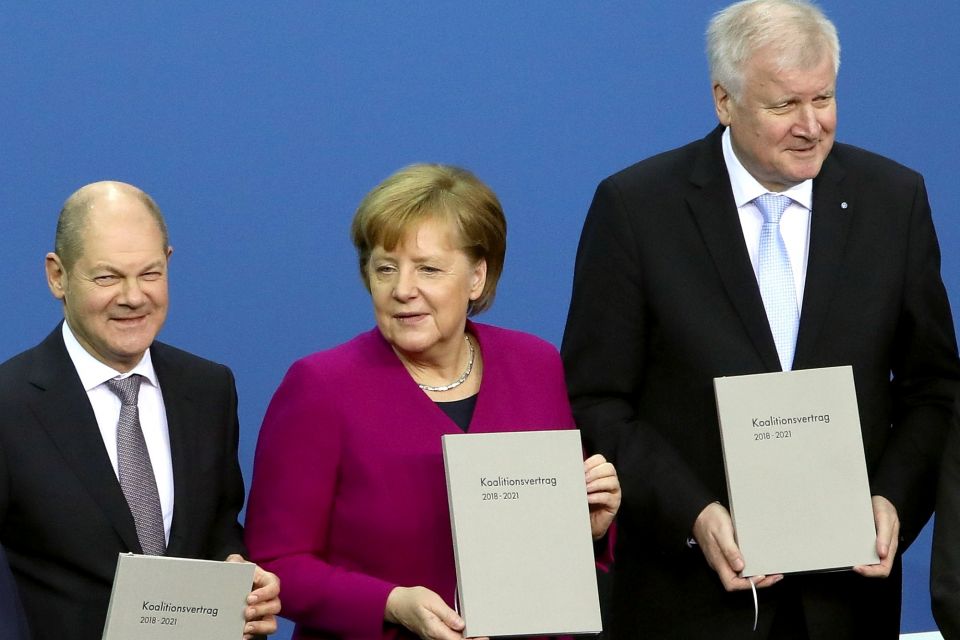 Among the many surprising results of the recent German elections was the near disappearance of the Left Party, i.e. die Linke. The 9.2% of the vote won in 2017 has almost halved to 4.9% in this past Sunday’s elections; the fact that die Linke remains in the Bundestag in any case is because it won three constituencies outright, which means that the usual 5% threshold does not apply here.

However, the only remaining party of the German left, deeply divided internally, is on the verge of heading for insignificance. The seriousness of this crisis is indicated by the fact that among first-time voters, in other words young people, only 8 per cent voted for die Linke, which is close to the 7 per cent share harvested by the far-right Alternative für Deutschland, ranked last among this group of voters.

The decline of the left has drastically simplified a scenario that before the elections presented a picture of governmental possibilities characterised by unprecedented disorder, as a large number of three-party coalitions were conceivable. Now there is no longer any possibility of a Red-Green-Red (R2G) coalition government, much to the relief of the leaders of both the SPD Social Democrats and the Greens.

Only two coalitions are currently possible, both including the Greens and the liberal FDP: one led by Scholz’s SPD, which won 25.7 per cent of the vote compared to 20.5 per cent four years ago, and the other, the Jamaican black-green-yellow variant, led by Laschet’s CDU/CSU Christian Democrats, which won 24.1 per cent of the vote after winning 32.9 per cent in 2017. A remote third possibility is another Grand Coalition with Scholz as chancellor and Laschet or another CDU figure as deputy chancellor. No one seems particularly enthusiastic about this option, however, because it conjures up memories of the disaster produced by its last materialisation, when Merkel/Scholz put it on its feet, after six long months of negotiation following the 2017 elections, once the Jamaican variant had collapsed.

On the eve of the 26 September elections, it was interesting to see how much the experience of the Jamaican negotiations after the 2017 elections had traumatised the German political class. Clearly, Merkel had soon lost control over the course of events, as the long nightly meetings concluded in a never-ending mess without anyone knowing what, if anything, had actually been decided. At one point, the FDP, under its current leader Christian Lindner, came to suspect that Merkel had long ago reached a secret deal with the Greens by which she intended to sideline the Liberals in the same way she had done in her second term in government between 2009 and 2013, with the result that the party ultimately failed to pass the 5 per cent threshold in the latter year’s elections and was left out of the Bundestag. Fearing a new version of such a scenario, Lindner broke off negotiations in a spectacular move that almost cost him the party leadership.

Seen from the present , this was the beginning of the end for Merkel. Her party blamed her for the poor result obtained then, which turned the 41.5% of the vote harvested in 2013 into the 32% achieved in 2017, as well as for the emergence of Alternative for Germany (12.6%), both events related to the opening of borders to refugees decided in 2015 by the chancellor.

This was followed by the devastating election results in several federal states in the second half of 2018, which resulted in Merkel’s resignation as party leader in exchange for the party allowing her to complete her term as chancellor. This required, however, cooperation on her part in the transition agreement with her successor as party leader and eventual future candidate for chancellor in the 2021 elections. These plans were derailed in the worst possible way, first with Annegret Kramp-Karrenbauer (AKK), who, installed by Merkel as CDU leader, gradually tried to distance herself from her on the refugee issue with an eye to the next elections, which was not to the chancellor’s liking, After forcing AKK to resign at the first given opportunity. Merkel then opted for Laschet, who then had to organise his election campaign according to a programme that stood for political renewal and showed total loyalty to the chancellor. As we know, that was too much for him, as it could have been for anyone else.

In fact, things could have gone worse for the CDU. A few weeks before the election its voting intentions hovered around 20 per cent in the polls, close to the Greens and behind the SPD, which stood at 25 per cent of the vote. If in the end Laschet almost caught the SPD it was because the last-minute campaign orchestrated against the red peril mobilised undecided voters at the prospect of an R2G coalition, which Scholz had not excluded for tactical reasons. The real winner, however, was Christian Lindner, who ended up in a crucial position, being needed both by the Greens, who this time are determined to enter government, and by chancellor candidates Scholz and Laschet.

Personally, Lindner probably prefers the latter, having negotiated with him in 2017 the ruling coalition in North Rhine-Westphalia, which happens to be the largest federal stat in the nation. With the Jamaican coalition disaster on his mind, however, Lindner suggested, a few hours after the results were known, that the FDP and the Greens should jointly explore the possibility of reaching an agreement on a possible common programme and on the third government partner, i.e. on Scholz’s SPD or Laschet’s CDU/CSU.

Possibly this may signal an imminent realignment of the bourgeois centre of the German political spectrum, made possible by the well-known generational shift, featuring two long-standing political enemies, divided by their different lifestyles, but both belonging to the same affluent middle class. It should be noted that among those who voted for the first time in these recent elections, the FDP and the Greens won 23 and 22 percent of the vote respectively, distancing themselves by far from the exhausted old centrist parties and ideological outsiders on both the right and the left.

However, even if Lindner and the Greens opted for Scholz, this would by no means signal a shift to the left in German politics. During the campaign, Scholz presented himself as Angela Merkel’s legitimate heir after having served in her government as deputy chancellor and finance minister for three and a half years. Scholz was nominated as a candidate by a party that lacked another and in which many of its members consider him too far to the right to be a good social democrat. On the other hand, hardly anyone in the SPD believed that Scholz could even come close to victory; and there were even those who thought that this time the party should even refrain from fielding a candidate to avoid the ensuing humiliation.

Of course, no one could have expected Merkel to make the grotesque strategic errors in the selection of her successors and in the respective transition processes in her party and in the state that have disastrously deprived the organisation with which she has governed for such a long period of time of power.

That said, nothing is as deeply rooted in German politics as the “extreme centre” (Tariq Ali) and if the 2021 elections proved anything it was this. In a Scholz-led government, which is the most likely scenario, Christian Lindner will claim the finance ministry and get it unless the Greens punish Baerbock for her poor performance as a candidate by pushing her into the background and handing the party leadership back to their co-chair Robert Habeck, who might harbour the same ambition to lead that ministry.

In 2017, during the first Jamaica coalition negotiations, Emmanuel Macron was reported to have stated that if Lindner were part of the next German government he, Macron, would be dead. Four years later this might be even more true than ever. In the first half of 2022 the basically ritualistic and symbolic presidency of the European Union will fall to France, where Macron is due to win the presidential election in April of that year.

Various public occasions are planned for Macron to display the trophies of his European pre-eminence. With a finance minister like Lindner, even in a government of the Francophile Laschet, who half-jokingly half-seriously claims to be a descendant of Charlemagne, these occasions will certainly not include anything beyond purely cosmetic changes to the financial constitution of the European Union and the European monetary union. As during Merkel’s term in office, Germany, whether led by Scholz or Laschet, will do what is necessary to ensure the survival of the euro, but no more, while negotiations on what is really necessary will remain as tough as ever.

To make a realistic assessment of German European policy over the next few years, it may be useful to consider the five-year budget plan of the Scholz finance ministry approved by the Grand Coalition government. By the end of 2021, Germany will have incurred 471 billion of new debt in three years, equivalent to almost two-thirds of the Next Generation EU (NGEU) Recovery and Resilience Mechanism, designed to benefit all 27 member states over a seven-year period.

To comply with the so-called debt brake included in the German constitution, federal spending will have to fall between 2021 and 2023 from 548 to 403 billion euros, so that the debt burden, equivalent to 75 per cent of GDP at the end of the first year, can return to the 60 per cent stipulated in the Maastricht Treaty. Interfering with the debt brake is out of the question for both Laschet and Scholz, and even more so for Lindner, who has promised not to pass new taxes. At the same time, huge sums of money will have to be spent on the renovation of the country’s physical infrastructure, which was already urgent before the pandemic.

Moreover, after last summer’s floods, additional spending is needed to mitigate the damage caused by climate change, which has now become an inescapable reality, while the presence of the Greens in government will make it a priority to accelerate the phase-out of coal, which will also be costly. We could add other items, but the fact remains that there will be few, if any, resources left for “Europe” and “European solidarity”.

Globalisation is an important driver of income inequality within countries, but mostly via financial rather than trade channels. Philipp Heimberger is Economist at the Vienna Institute for International Economic Studies (wiiw) Cross-posted from Philipp’s blog […]

Positive Money Europe – A race against time: The implications of the ECB climate action plan

, The ‘jungle’ camp on Samos. Samos Volunteers Gemma Bird, University of Liverpool and Amanda Russell Beattie, Aston University As winter took its toll in January on the Aegean island of Samos, the refugee population […]