Marx was rather indifferent to the issue of inequality under capitalism 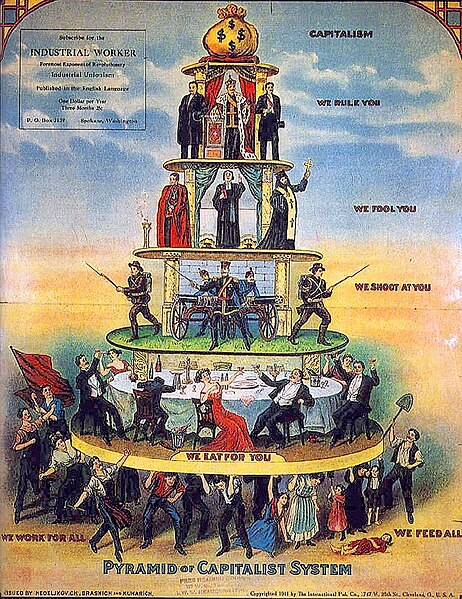 Among those who have read Marx, it is well known that Marx was rather indifferent to the issue of inequality under capitalism. Among those who have not read him, but know the left-wing views from social-democracy and assume that Marx’s view must have been similar (but just more radical) this is not well known, nor are the grounds for such an attitude well understood.

(Marx’s views on the topic are dispersed: they are in Grundrisse, The 18th Brumaire…, Capital, Critique of the Gotha program. A very nice and succinct recent discussion can be found in Allen W. Wood’s piece “Marx on equality”.)

There are several grounds on which Marx treats inequality as we currently understand it –that is, inequality of income or wealth between individuals—as relatively inconsequential.

The first ground has to do with what is the main, as opposed to derivative, contradiction in capitalism: that between owners of capital and those who have nothing else but their labour-power. As for Ricardo, for Marx too, class determines one’s position in income distribution. Class is therefore prior to income distribution. It is the abolition of classes that matters. Engels (who certainly on this had the same opinion as Marx) wrote: “The elimination of all social and political inequality” [as stated in the social-democratic program that he is criticising] rather than ‘the abolition of class distinctions’, is…a most dubious expression, as between one country, one province and even place and another, living conditions will always evince a certain inequality which may be reduced to a minimum but never wholly eliminated”. (Letter to August Babel) Thus, “to clamour for…equitable remuneration on the basis of the wages system is the same as to clamour for freedom on the basis of slavery” (Marx,Value, Price and Profit).

Once classes are abolished, the “background institutions” are just and this is the moment to begin any real discussion about what is a fair distribution. This is the topic about which Marx wrote relatively late in his life, in Critique of the Gotha program in 1875. There he introduced the famous distinction between the distribution of income under socialism (“to everybody according to their work”) and under communism (“to everybody according to their needs”).

Under socialism, as Marx writes, equality in treatment presupposes an original inequality because people of unequal physical or mental abilities will be rewarded unequally: ”This equal right is an unequal right for unequal labour.” (Critique..).

Under communism, however, in a Utopia of abundance, the real equality may imply an observed inequality in consumption, as some people whose “needs” are greater decide to consume more than other people whose “needs” are less. If in a hypothetical communist society we observe a Gini coefficient of 0.4 like in today’s United States, it tells us nothing about inequalities in the two societies—and certainly not that the two societies display the same level of inequality. In one (communism), it is voluntary inequality, in the other involuntary.

One is, of course, reminded here of Amartya Sen’s “capabilities approach”: achievement of equality might require unequal treatment of unequal individuals.

Vulgar socialism has taken over from the bourgeois economists the consideration and treatment of distribution as independent of the mode of production and hence the presentation of socialism as turning principally on distribution. (Critique…)

The third ground for unconcern is more philosophical. Hired labour implies alienation of the worker from the meaning and product of his work. If the fundamental issue is alienation, it cannot be overcome by mere improvements in the distribution of income. As a hired worker in Amazon, I am as alienated from my work at Amazon whether my wage is $10 per hour or $50 per hour. To transcend alienation both private property and the division of labour have to be abolished.

All of these grounds lead to the rejection of the salience of inequality as such under capitalism. How is it then that trade union activity, or social activism in general, is justified if the improvements in the material conditions of workers cannot be the ultimate objective of a Marxist-inspired movement operating under capitalist conditions? Here, Marx takes a very different stance from the usual social-democratic. The struggle for the increase in wages, the shortening of the working week, lower intensity of work etc. are all valuable because they highlight the antagonistic nature of capitalist relations and, more importantly, because the joint work and unity of purpose implicit in social activism create bonds that presage the future society of collaboration and even of altruism. As Shlomo Avineri writes: “[Workers’ association] does not have a narrowly political, nor a trade union significance: it is the real constructive effort to create the social texture of future human relations” (The social and political thought of Karl Marx, p. 142).

The primary objective of such social activism is…pedagogical: the learning of social cooperation, and only secondarily, the improvement in the economic conditions of the working class—or any other group whose interests are thus promoted: gender, race or ethnicity. (One can even go further and say that such social activism is the essence of praxis: “man’s conscious shaping of the changing historical conditions” (Kolakowski, vol. 1, p. 138)).

For all these reasons, a student of income distribution, in the current sense of the term, or the social activist who proposes one or another meliorative measure, is involved into something that, from Marx’s perspective, while not useless, as it makes the underlying contradictory class interests more apparent, fundamentally does little to move the reality of life under capitalism towards the creation of just “background institutions.”

Jonathan Cook – Greta Thunberg and the Consolation of Doubt

German ordoliberalsim has failed Europe. It is time to turn once again to Keynes, explains Andrea Kalajzic. Andrea Kalajzic graduated in Production and Development Economics from the University of Insubria in February 2018. andro.kalajzic@fastwebnet.it Cross-posted […]