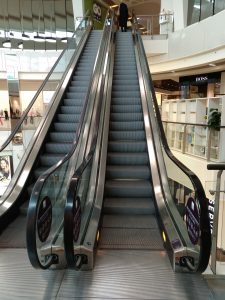 Poland experienced a sharp rise in inequality during its transition from communism to capitalism, and this trend has continued into the 2000s. The authors chart a century of data on Polish inequality to examine the key causes. Their work illustrates the central role of policies and institutions in shaping long-run inequality. This rising inequality and promises to address it through redistributive policies were key factors in the victory of Law and Justice at this year’s Polish election – and they could well be a major feature in the UK’s upcoming election campaign.

Poland’s profound transformation from communism to a market economy happened in less than one generation, and the accompanying economic growth has been the fastest in Europe and much faster than that of famous ‘Asian Tigers’. At the same time, however, there has been growing support for redistributive policies, which became a key factor in the election victories of the right-wing populist party Law and Justice in 2015 and 2019. A flagship family allowance programme (500+) was introduced in 2016, and the retirement age has been lowered to 60 for women and to 65 for men. In the electoral campaign of 2019, a further expansion of 500+ was proposed along with a radical increase of the minimum wage from around 46% of the average wage to nearly 78%.

This suggests that, although the real average national income has more than doubled since 1990, not all income groups and income sources have benefited from it equally. How do inequalities evolve in such quick-changing societies and what is the role of transition policies and emerging institutions? How does the Polish experience compare to western European countries, Russia, other former socialist countries in the EU, or to China and other developing countries?

In a recent study, we made a comprehensive attempt to look at the long-run evolution of inequality in Poland. We combined tax, survey and national accounts data to provide consistent series on the long-term distribution of national income in Poland. Figure 1 shows that top income shares in Poland have followed a U-shaped evolution from 1892 until today. Inequality was high in the first half of the twentieth century due to the high concentration of capital income at the top of the distribution. As has been documented now in many countries, the downward trend after the Second World War was induced by the fall in capital income concentration. 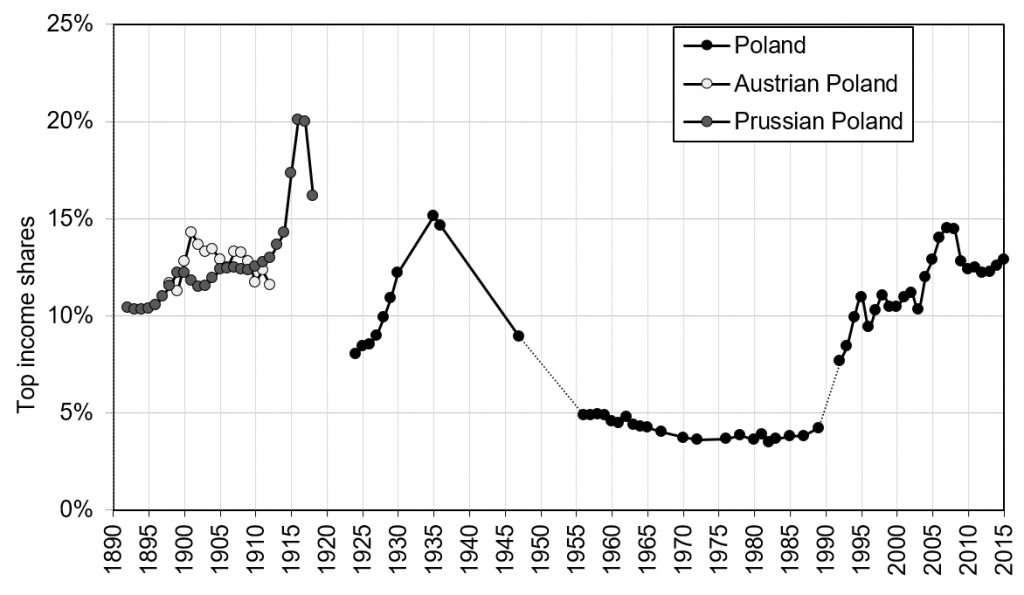 Note: the Prussian Poland is the Province of Posen and West Prussia; the Austrian Poland is Galicia. Source: Authors’ computation based on income tax statistics. Distribution of fiscal income among tax units.

The introduction of communism signified a comparatively greater shock to capital incomes relative to other countries, by literally eliminating private capital income with nationalisations and expropriations. In addition, it implied a strong reduction of top labour incomes. During the remaining four decades of communist rule, top income shares displayed notable stability at these lower levels.

We analysed the transition from communism to the market economy by constructing the full income distribution (1983-2015) from combined tax and survey data. Figure 2 shows there was a substantial and steady rise in inequality after the fall of communism, which was driven by a sharp increase in the income shares of the top groups. Within one generation, Poland has moved from being one of the most egalitarian to one of the most unequal countries in Europe. The highest increase took place at the outset of the transition in the early 1990s, but we also found substantial growth since the early 2000s, after Poland joined the EU. 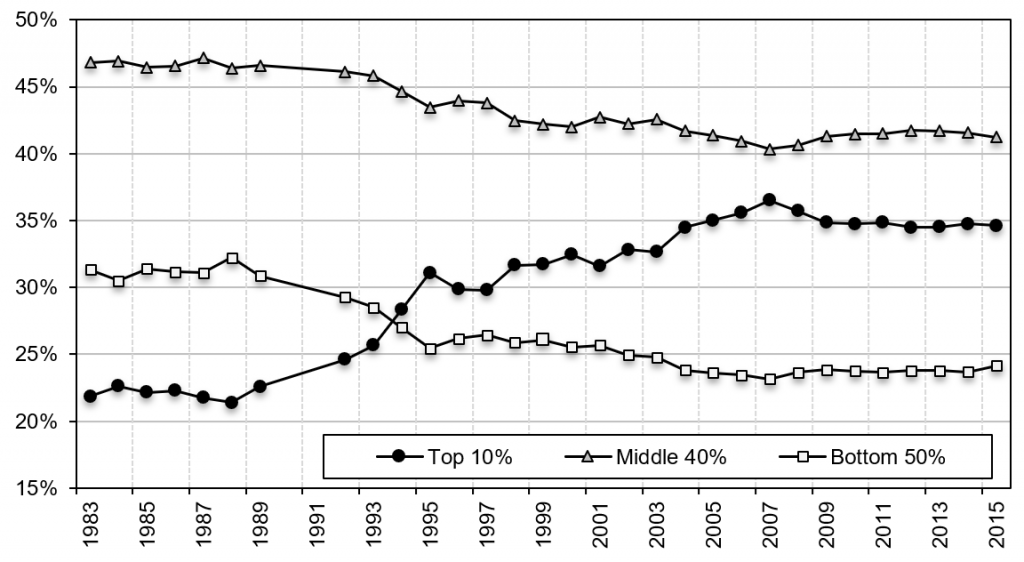 Source: Authors’ computation. Distribution of pre-tax national income (before taxes and transfers, except pensions and unemployment insurance) among equal-split adults.

Today, Polish top income shares are at the level of more unequal European countries, most notably Germany and the UK, but still substantially below those documented in Russia. The table below shows that over the whole period 1989-2015, the top 1% has captured almost twice as large a portion of total income growth than the bottom 50% (24% versus 13%). This contrasts with France, where the top 1% captured the same share of growth as the poorest half.

Table: Income growth and inequality in Poland, France and Russia 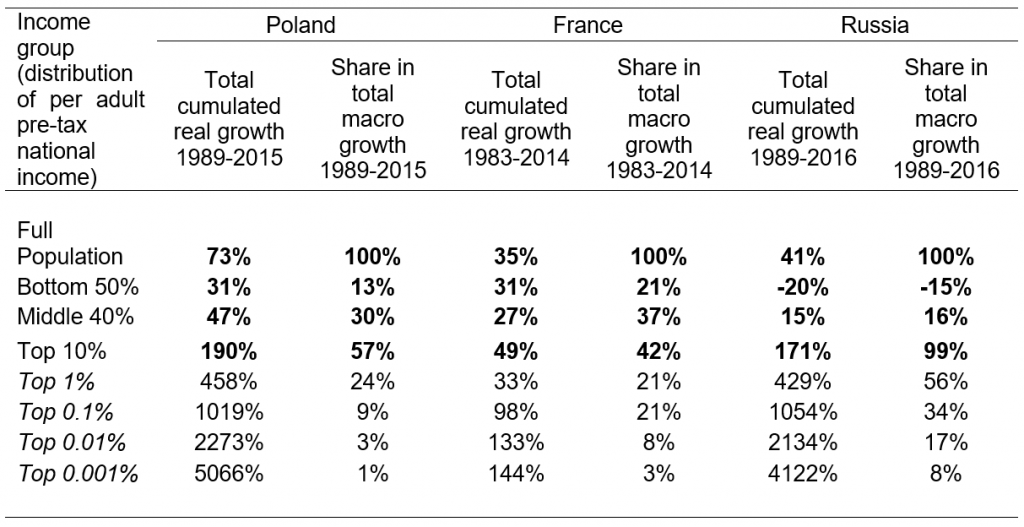 The rise of inequality after the return to capitalism in the early 1990s was induced both by the rise of top labour and capital incomes. We attribute this to labour market liberalisation and privatisation. But the strong rise in inequality in the 2000s was driven solely by the increase in top capital incomes, which are dominant sources of income for the top percentile group. We relate the rise in top capital incomes to current globalisation forces and capital-biased technological change, which have potentially rebalanced the division of national income in favour of capital.

Overall, the unique history of Polish inequality illustrates the central role of policies and institutions in shaping inequality in the long run. The communist system eliminated private capital income and compressed earnings, which led to the sharp fall and decades-long stagnation of the top income shares.

By the same token, labour market liberalisation and privatisation during the transition instantly increased inequality and brought it to the level of countries with long histories of capitalism. On the other hand, a marked increase in social transfers and expansion of the safety net during the early transition years played a key role in ‘protecting’ the bottom 50% of the distribution. It provided the general political support for market reforms and enterprise restructuring in Poland.

This contrasts with the Russian transition, as shown in the table above, where the share of the bottom 50% collapsed. Social transfer payments in Russia were small and declining, while pensions were not indexed for inflation, leading to a plunge in living standards of the bottom 50% when hyperinflation struck in the early 1990s. This suggests that mitigating a more substantial rise in inequality may be conducive to economic growth.

Finally, recent developments suggest that the future of inequality in Poland is likely to be linked with the prominent role of capital income among top incomes. Moreover, one should not expect a weakening of this trend, as processes connected with globalisation and technological change seem to contribute to the growing dominance of capital in the economy.

Rising inequality might have adverse social and political implications, as is evident in the recent populist anti-globalisation backlash in Poland and internationally. The issue of distribution of gains from economic growth has become crucial for sustaining long-run development.

German ordoliberalsim has failed Europe. It is time to turn once again to Keynes, explains Andrea Kalajzic. Andrea Kalajzic graduated in Production and Development Economics from the University of Insubria in February 2018. andro.kalajzic@fastwebnet.it Cross-posted […]

Tom Mills and David Miller – Is the Labour Party Against Empirical Sociology? Some Notes on Power, Elites, and Anti-Racism

Empirical examinations of the structures of power, and the nature of elites, are essential to any anti-capitalist and anti-imperialist movement. By deligitimising them, we undermine rather than strengthen the fight against racism. Tom Mills is […]

My new book in German with the translated title: “Brave New Money: PayPal, WeChat, Amazon Go – A Totalitarian World Currency in the Making” has just been published by Campus. I have translated the “Introduction […]