The environmental protest group has said it wants to highlight the role of the City of London in financing fossil fuels around the world. 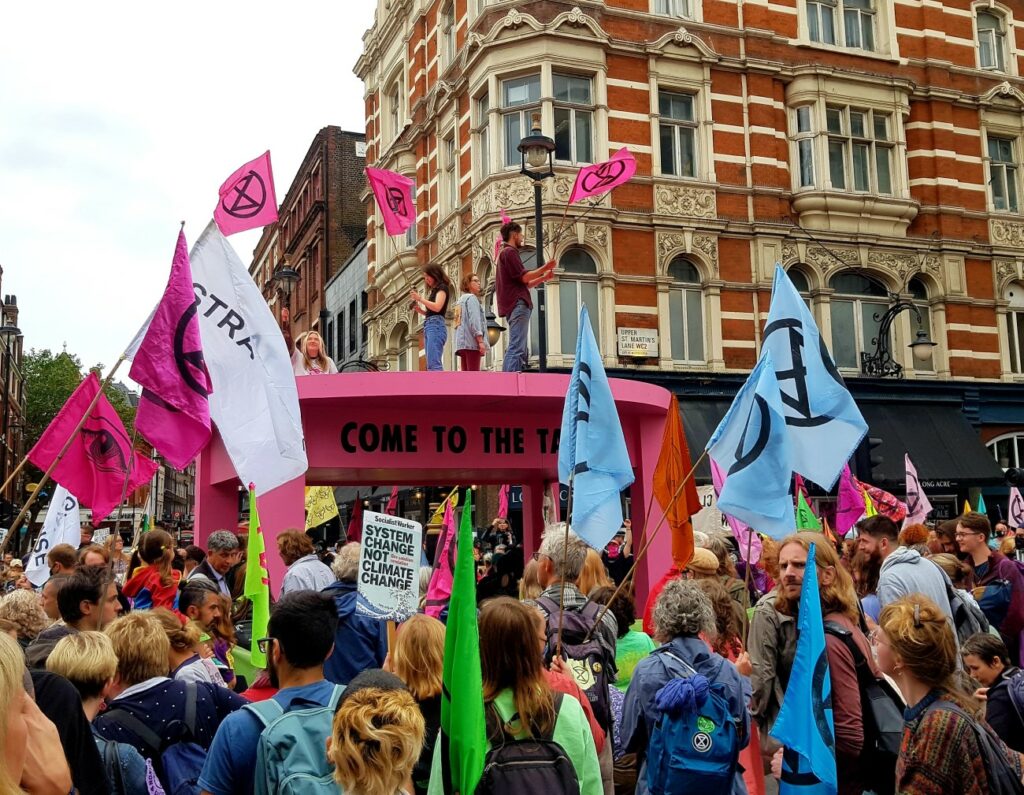 Hundreds of climate activists are occupying a busy street in central London on 23 August in the first of two weeks of protest against the UK financial sector’s continued investment in fossil fuels.

The environmental campaign group Extinction Rebellion (XR) has erected a large pink “crisis table” at the junction of Long Acre and St Martins-In-the-Fields in Covent Garden.

Activists have blocked Garrick Street by attaching themselves to a van parked across the road.

Ben, 36, an XR “rebel” from Somerset, was one of the activists lying under the van, with one of his arms connected to a metal tube behind the wheels.

“We need large social change to tackle climate change”, he told DeSmog. “The government doesn’t seem to have the appetite to move from ‘business as usual’.

“We will have to move to a more plant-based system, we will have to reduce flying. Government is in a position to help these changes.”

When asked about his dramatic protest, Ben said: “People have for decades been protesting and marching. Now we are running out of time.

“To stay with 1.5C of warming we have to make rapid changes now.”

The protest began with a rally in Trafalgar Square. Thousands of protesters waved banners reading “Act now because it’s too late”, “Rebel for life”, and “Code red for humanity” – a reference to the recent United Nations climate report.

There was a large police presence including scores of officers and at least two police helicopters flying overhead.

XR speakers drew attention to the City of London’s financing of fossil fuels around the world, which experts estimate could be responsible for as much as 15 percent of global emissions. They also noted the 230th anniversary of the Haitian Revolution to highlight the impact of companies extracting fossil fuels in the developing world.

To the sound of drum bands, protesters marched round the square and up St-Martins-In-the-Fields, shutting down roads as they went. Protesters then gathered near Covent Garden to begin the occupation.

XR has been criticised for its disruptive tactics, including on the London transport network in 2019. The group said today that the giant pink “crisis table” would allow urgent talks about climate change to take place in public without stopping people walking through the area.

An XR statement said the action was chosen “to counter the media bombast that Extinction Rebellion aims to cause ‘chaos’ across the capital”. They said the busy area would “capture people passing by without creating ‘chaos’ for the general public”.

‘Come to the Table’

Charlie Waterhouse, from Extinction Rebellion’s design team, said: “We are inviting everyone in Britain to come to the table and have the kind of grown-up conversations government, industry and the media are refusing.

“Only the common sense of citizens and the wisdom of global perspectives will navigate the impossible decisions ahead, and that navigation starts today, on the streets of London.”

Other “crisis talks” are expected across the country as XR demands that the City of London end its funding of fossil fuels, taking up calls from the International Energy Agency and the UN.

Gail Bradbrook, Extinction Rebellion and Money Rebellion co-founder, said: “Our leaders in Government and Business have been failing us for years, they are taking us over a cliff.

“If they are in any way serious about tackling this existential crisis then they would immediately stop financing fossil fuels, because continuing to pour petrol on a fire is an obvious sign of insanity.”

She added: “Why don’t they act? They are wedded to a corrupt political economy, centred in the City of London, that extracts vast profits from communities and nature, and depends on destructive economic growth for its survival. We need to tell the truth, humanity has to change course, we have no choice.”