We asked Charles Adams, a university professor himself, what the bigger picture is with regard to the current University Strike in the UK. 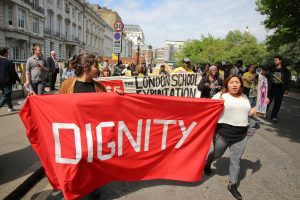 These are big questions – perhaps too big to answer in a short piece, but here goes.

To answer the first question, some history: Building on the success of science in the renaissance and enlightenment, there was a feeling that maybe we could apply similar principles to the organisation of society. One thing that science had but society didn’t was a unit of measurement. So for two hundred years, political economy struggled to find something that could be measured, and something that could be optimised. A strange quantity called utility was invented but it did not have units, and when it was eventually accepted that we could not measure it, we had to settle for monetary units, with GDP – measured in those monetary units – becoming the thing that should be optimised. GDP growth became our raison d’ȇtre; and money, the measure of all things. Our World was reduced to a market place where everything has a price, including health and education. Still, many knew all along that money is not real. The Nobel Prize winning chemist Frederick Soddy, was also a crank and anti-Semite, but he did leave us with a memorable quote that money is:

The nothing you get for something before you can do anything.

There is something circular here, and indeed money is simply a particular form of information that flows in circles – until the credits and debits cancel, like the positive and negative charges in an electrical circuit. But where does the circle start? If we need money before we can do anything, then those with money, or the ability to create it, control what can be done. And that, is pretty much where we are now.

Except that this is not the whole story. In a democracy, the power still lies, with the people, with what they want. If they want to, the people can change the rules. They could decide that individual human rights, democratic rights, the right to education and health, and sustainability, are more important than the power of capital. They have the power to realign the rules of the economic game appropriately. But any realignment requires power and unfortunately in our quest to measure everything we sold a share in our power to money. Now, unless the people are united,nothing changes, which is one reason why owners of capital are so keen to keep us divided.

But from where we are now, a dramatic change in mind set might be needed. We had gone so far down the road of believing that money decides what can be done, we have lost the belief in our own power. We need to relearn that it is not money that determines what can be done, it is resources, most often human resources, particularly knowledge and desire. It is the workers, the politicians, the medical practitioners, the teachers and the students that deliver. They are Hayek’s agents on the ground, and it is their struggle against the power of capital that will determine all our futures.

In this sense, recent events from the larger scale political turmoil in many democratic societies, to the finer detail of recent strikes by junior Doctors and university lecturers in the UK are all symptoms of this greater struggle. They are examples of small scale collective action, not yet coordinated. But from these roots is a realisation that something larger is stirring. The greater struggle for what we want to deliver as a society, the desire not to be constrained or controlled by capital, the desire to put humanity first.

Researchers call for new tax rules to “tax corporations where employees work, not where ledgers hide” Cross-posted from Tax Justice Network Decades of tax wars among the world’s richest countries are unravelling the century-old global […]

Industry lobbyists who want to continue monetising users’ online data are battling against new ePrivacy regulations, targeting EU member states in the Council. And some member state governments are only too happy to help. Adapted […]

Big Tobacco used to be one of the principal sports sponsors. Now some major climate polluters have replaced it: Big Carbon. Alex Kirby is a former BBC journalist and environment correspondent. He now works with […]